Biotech's banner performance in 2021 has shown signs of waning. November 2021 did not help matters, with the XBI index down 10%+ in November.

In this post, we estimate the impact of biotech's bad November on venture fund returns. Venture funds don't publicize their returns, and they typically don't report monthly to their LPs, but we can track the performance of their investments that have gone public. The data comes from our biotech investor database. 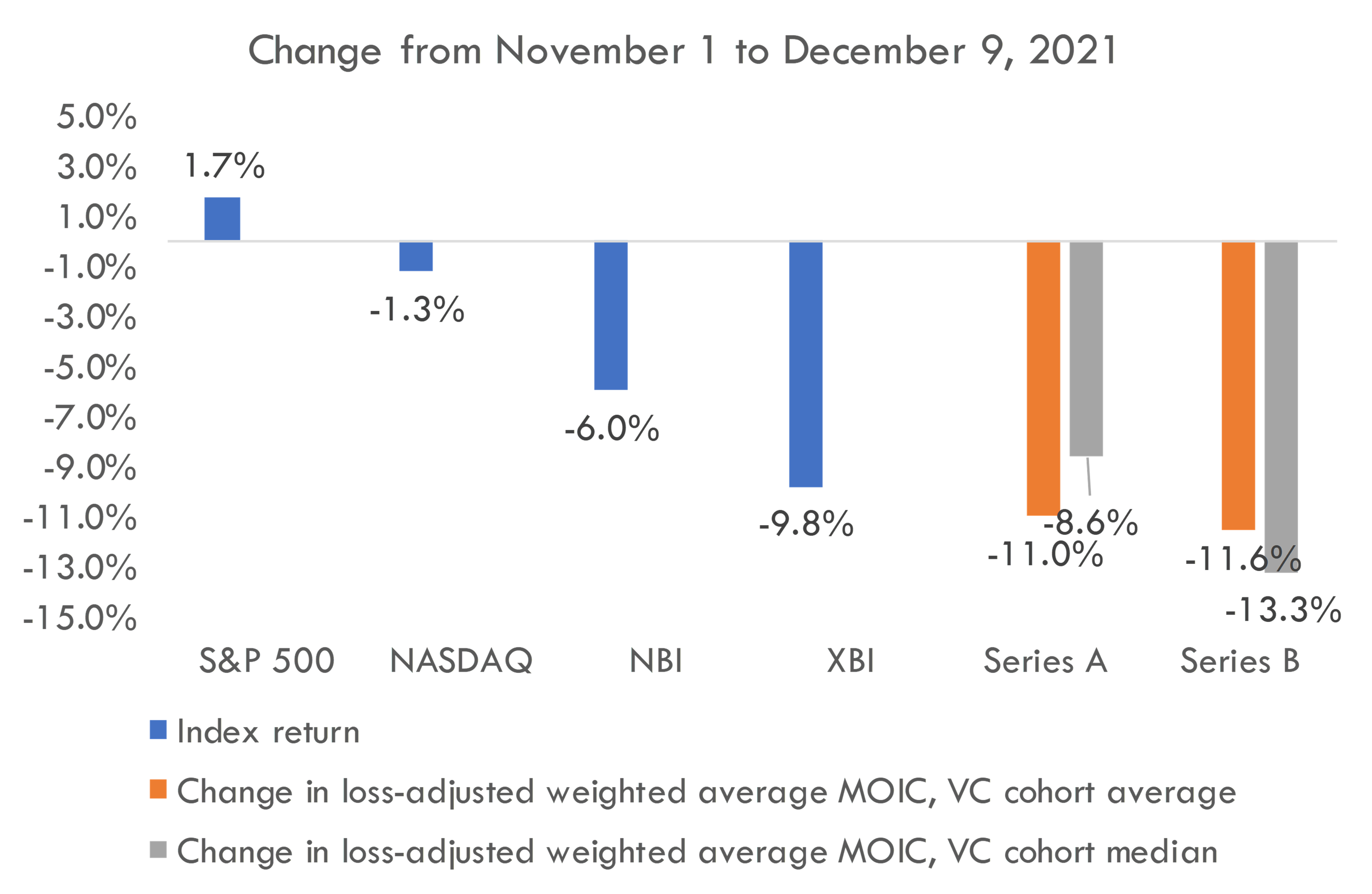 Have some funds fared better than others? 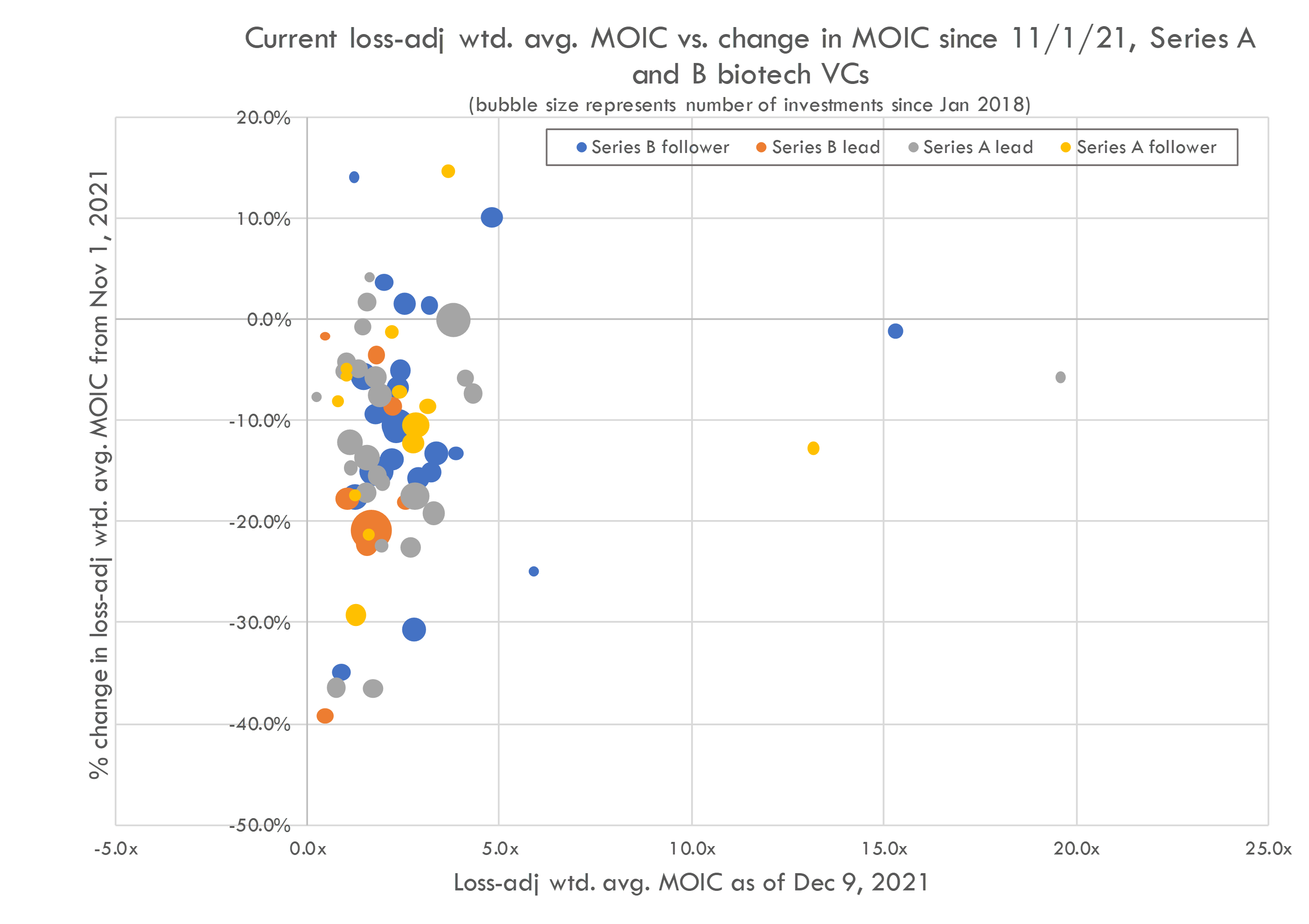 Above we see a scatterplot of fund performance during November. The x-axis is the loss-adjusted weighted average MOIC, an estimation for the venture firm's expected return as of December 9, 2021. The y-axis represents the change in this metric from November 1 to December 9, 2021. The colors represent different investment strategies: funds that primarily focus on Series A vs. Series B deals, and funds that generally lead investments vs. follow on in rounds that other funds lead.

Most funds are down between 10-20%. There are a number of funds that are down more than 20% in November, and a handful that are up.

The below chart excludes the outliers. We can see that despite being down significantly in November, there are several funds that are still performing well overall. There is also a subset of firms that were doing well before November, and will recover if the market rebounds from the dip.

Notably, there is a very wide range in VC performance. The top funds are delivering strong returns even in an year where biotech has been the worst-performing public sector, while some funds are not doing as well. 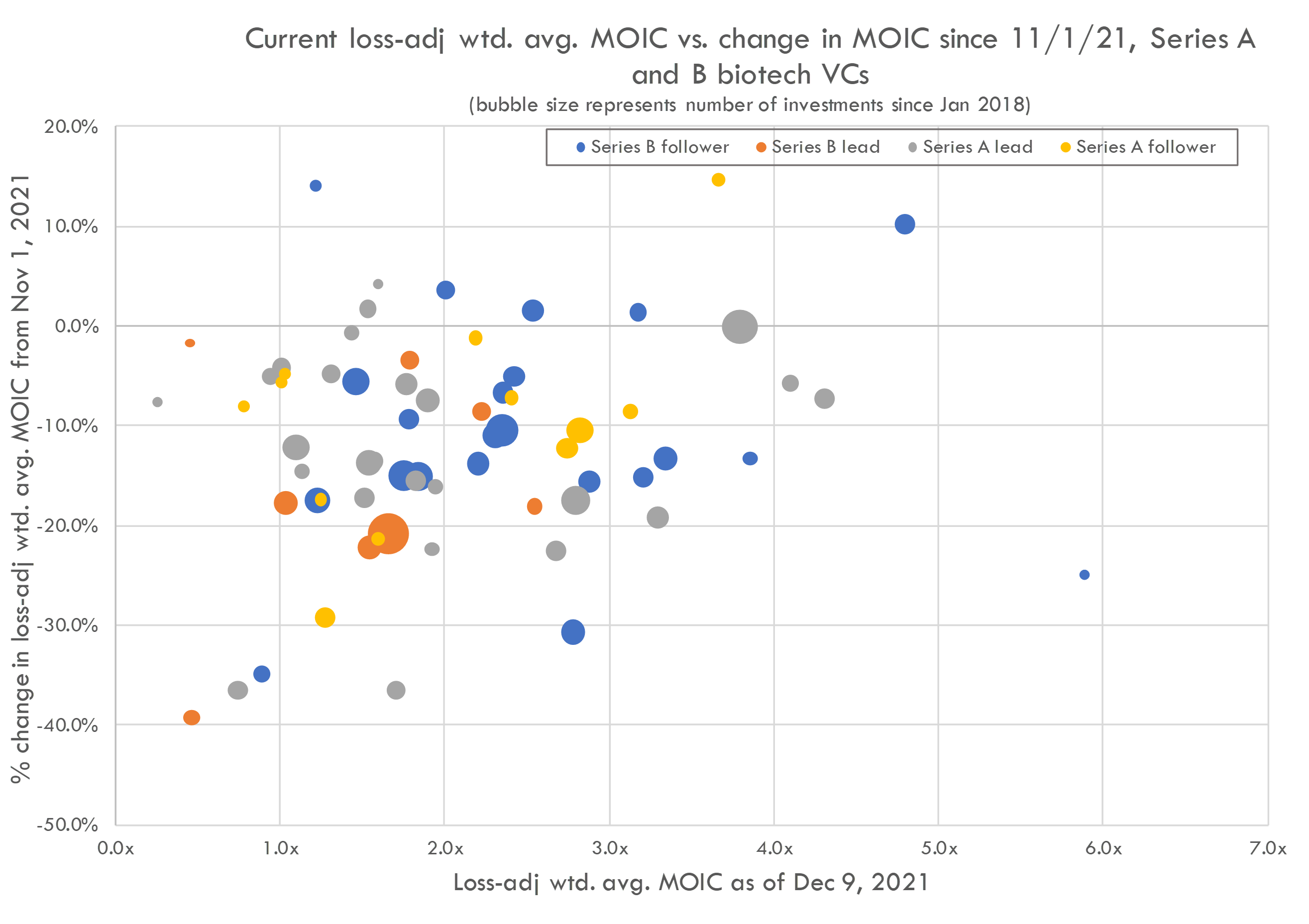 Most of these funds were probably looking much better earlier in the year. The XBI is down 37% from its all-time peak in February of this year. Biotech VC is a risky asset class, so volatility is to be expected. But the fact that many VCs are still performing quite well despite a challenging environment highlights the strength of the asset class (and the importance of picking good managers).


1 This approach is likely not accurate for estimating fund value, but it will be more accurate in estimating the change in a fund's value over the course of short time frames, like the one-month period we are focusing on. This is because venture funds typically don't update the valuations of their private investments more than once a quarter, so the only valuations that would change in a quarter are the fund's positions in companies that have gone public but are not fully exited. Adjusting this weighted average MOIC by the loss rate (approximated here by the percent of investments that fail to raise or exit within two years) normalizes the weighted average MOIC to account for investments that do not generate a return. We only analyze funds where we have MOIC data for at least 5 IPOs. Because we calculate weighted average MOIC using the amount invested by each fund per deal, we only include MOIC data where we know how much the fund invested in the deal (so in instances where we have MOIC data for a deal, but don't know the amount a fund invested, we don't include the deal).