The case for young biotech founders

Today, young biotech CEOs are almost unheard of. The conventional wisdom is that only experienced executives can build successful biotech companies. The goal of this post is to challenge that conventional wisdom, and encourage more investment in and support of the next generation of entrepreneurial talent.

This post is a summary of a more detailed series of posts I wrote on this topic. The first post in the series is here 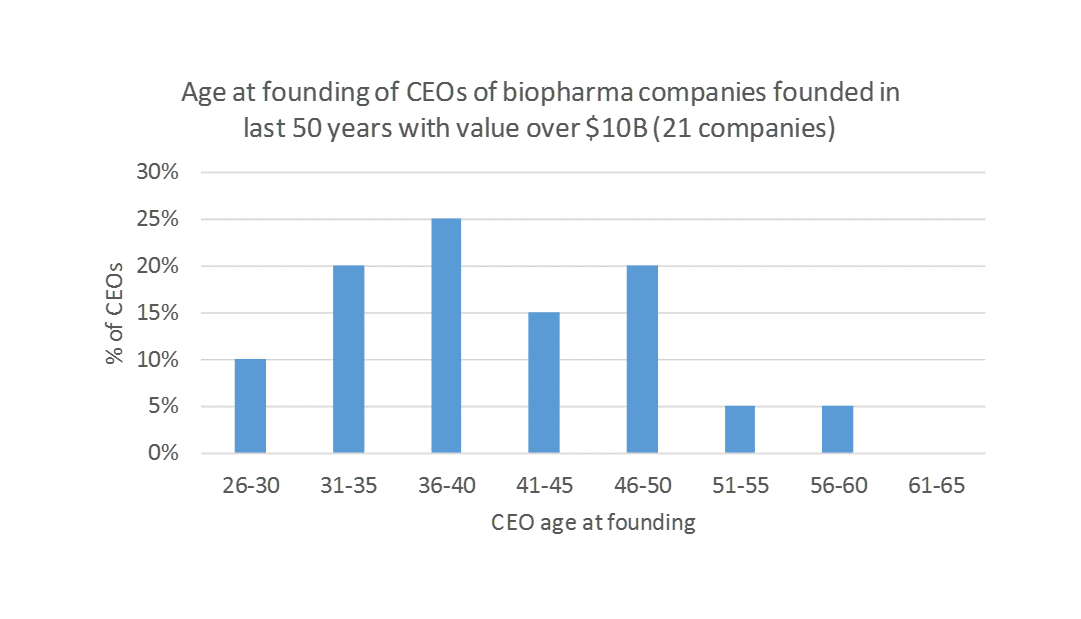 For a more detailed discussion of data on startup CEO age and performance, see this post 3.

If young CEOs can build great companies, why don't investors fund them?

I hypothesize that the industry’s current preference for experienced CEOs is a rational response to the “dark ages” of the late 1990s and 2000s. This period saw very few lasting companies get built. 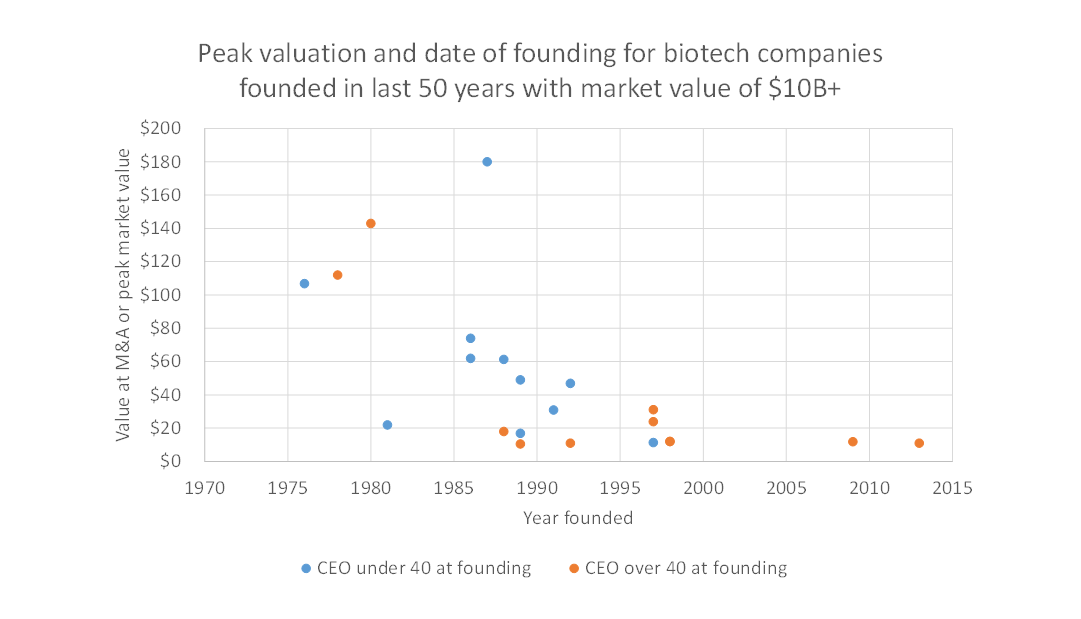 Why was this time period so challenging?

For a more detailed discussion of these challenges, see this post.

Eroom's Law put the cost of developing a drug out of reach of cash-strapped startups. 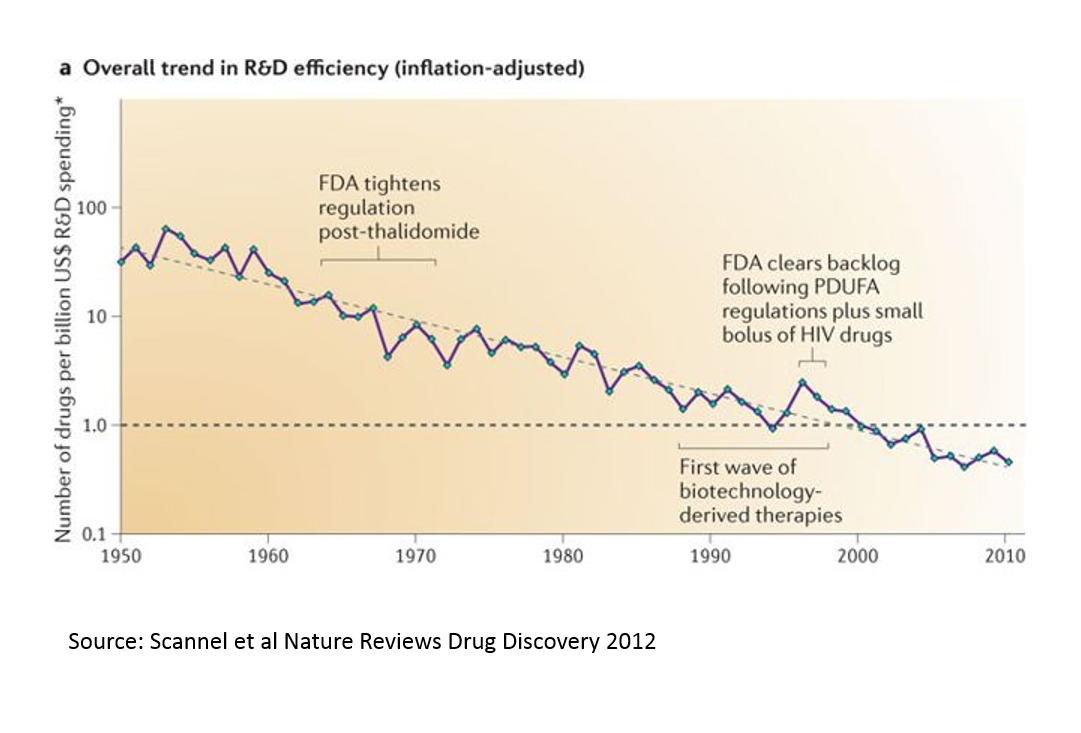 A conservative FDA was approving fewer new drugs, and big companies were better able to absorb regulatory risk than were startups. 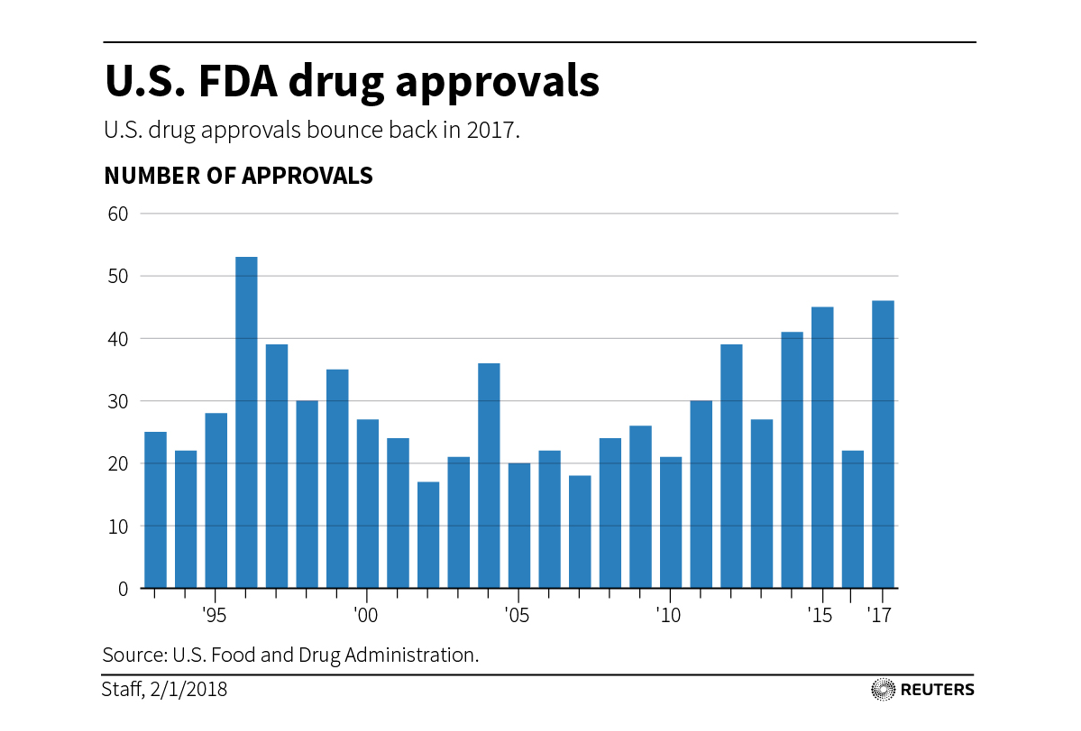 The exit environment was challenging, so it was hard for biotech venture investors to make money. 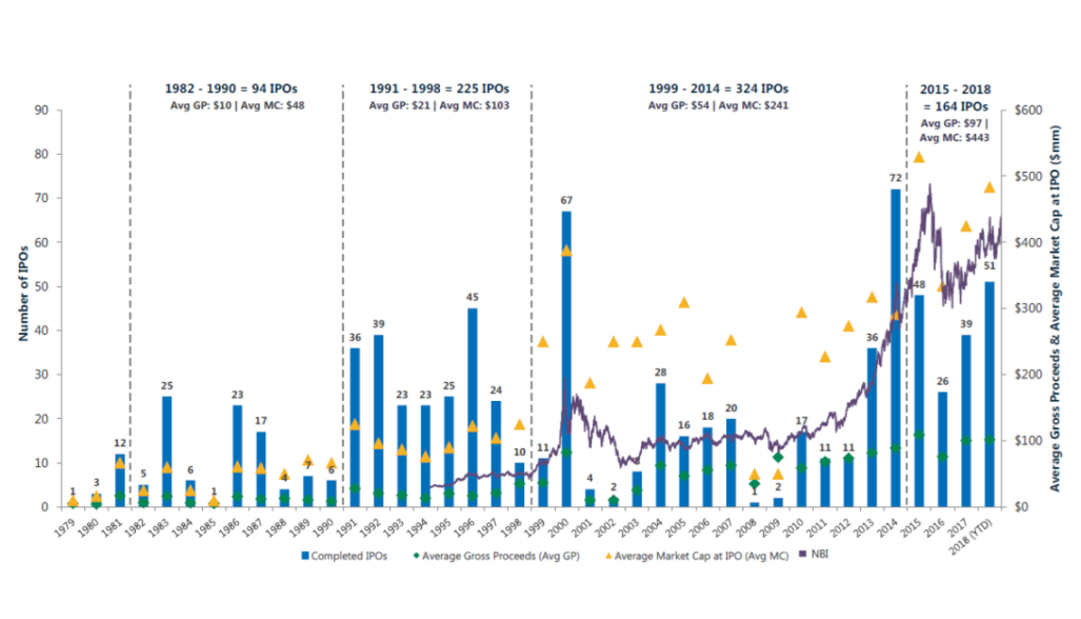 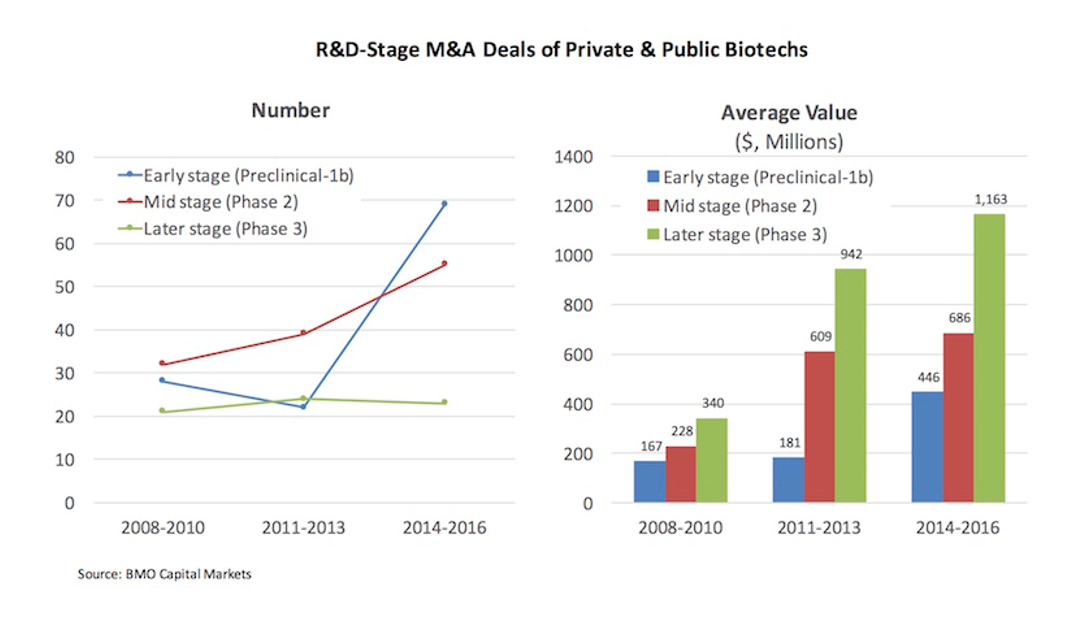 A technological drought prevented startups from getting off the ground. The breakthrough technologies of the turn of the century – gene and cell therapy 1.0, antisense therapy, the sequencing of the human genome – that could have fueled the next wave of startups proved to be more hype than reality 4.

The industry has emerged from the dark ages

To read more about biotech's recent "renaissance", check out this post.

We are seeing a new generation of high-growth biotech companies emerge, built on next-generation technology. Unlike the build-to-buy startups of 10 years ago, these new startups increasingly are becoming stand-alone companies, opting to do late-stage development and even commercialization on their own. 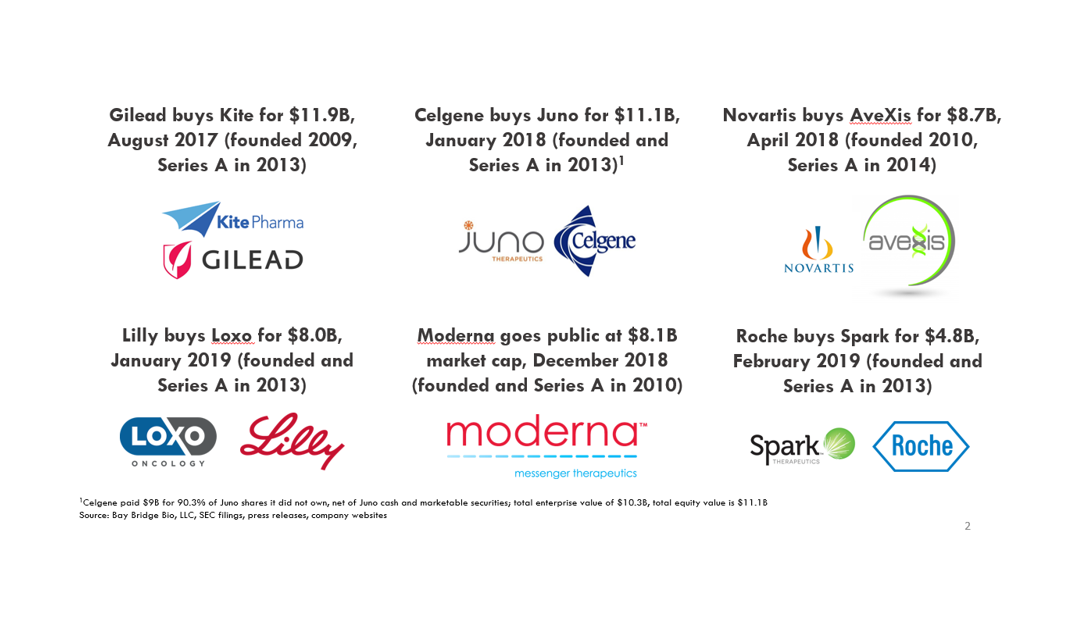 Some of these companies are getting bigger, faster than even tech startups. When Kite was acquired in 2017, it was more valuable than Dropbox, and about as valuable as SpaceX and Twitter. Kite was founded earlier than all of those tech companies. The days when only software companies could become huge are behind us.

We are seeing biotech "decacorns", but there are plenty of unicorns as well. Between M&A and IPOs, a total of 75 biopharma startups reached $1B+ “unicorn” valuations from 2013-1H2018.


What's enabling these companies to grow so quickly?


In recent years, FDA has become much more supportive of innovation. FDA’s willingness to support innovation is critical to bringing novel therapeutic modalities like gene therapy, cell therapy and microbiome therapy to patients. 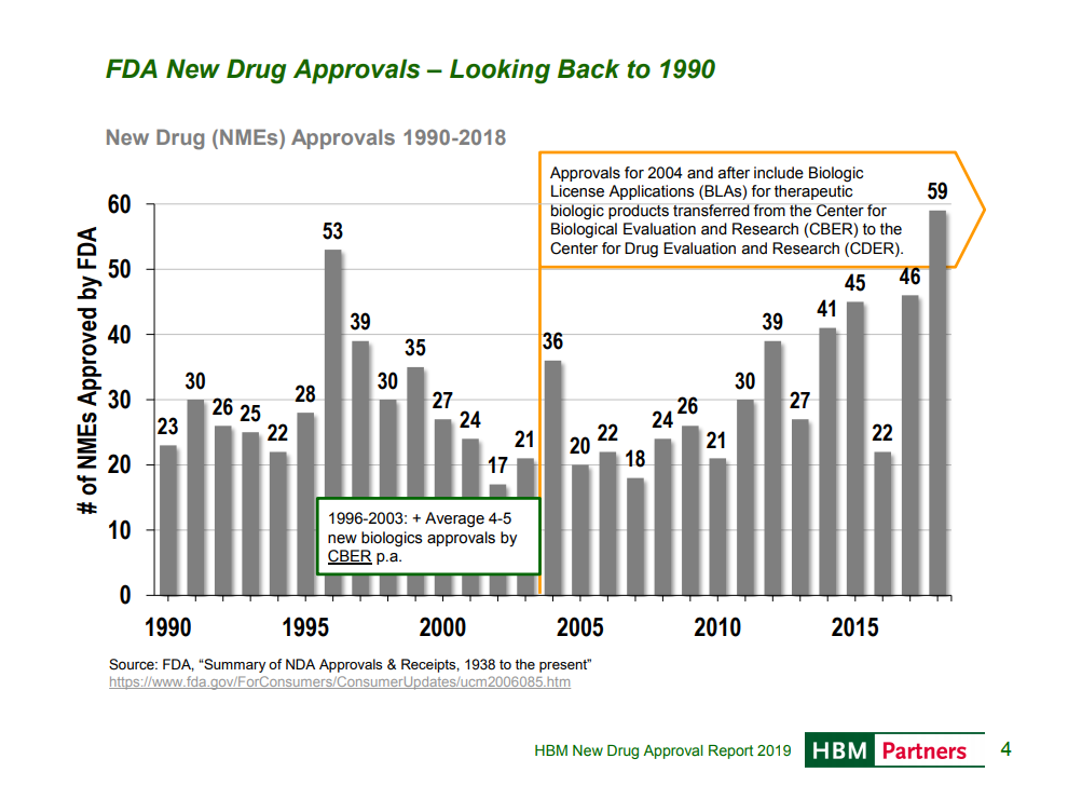 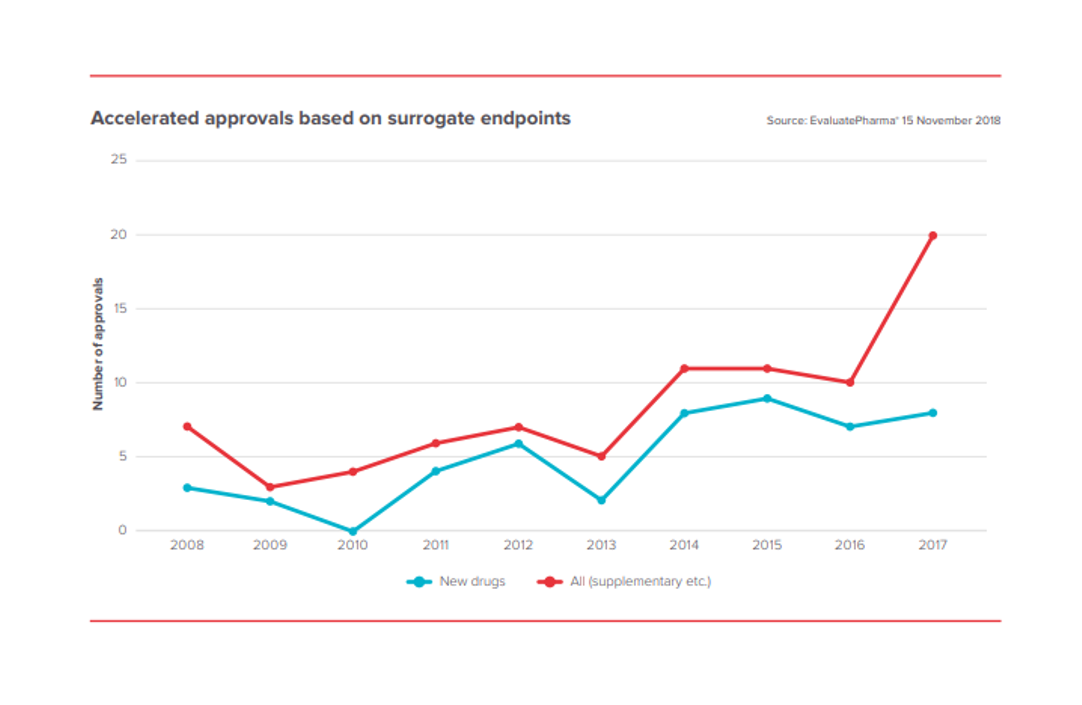 Checkpoint therapies have turned some cancers from death sentences to manageable chronic diseases. Precision medicines like Loxo’s Vitrakvi enable physicians to treat cancer based on genetics, rather than the tissue the tumors originate in. Advances in gene and cell therapy have shown tremendous clinical benefit for patients with B cell malignancies, SMA (the most common genetic cause of infant death) and a form of congenital blindness. 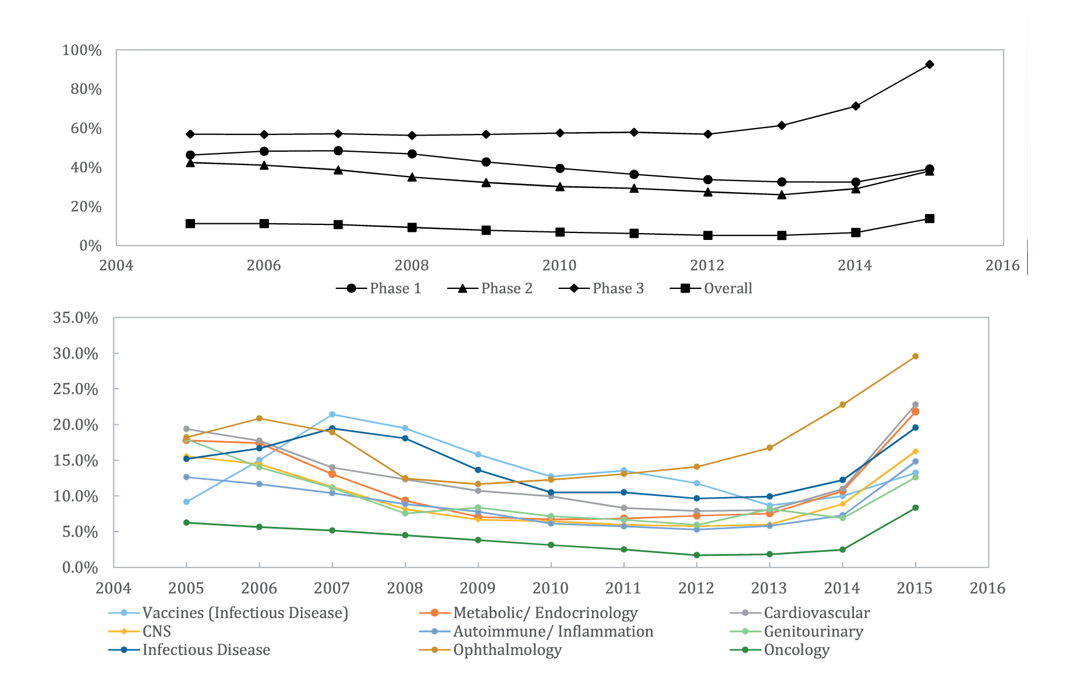 Investors are flocking to biotech, a sector that until recently was the last bastion of specialist investors. Capital is no longer a constraint for high-quality startups. Favorable public markets enable small companies to take on later-stage R&D and even commercialization. Risk-tolerant early-stage VCs enable companies to tackle ambitious science. 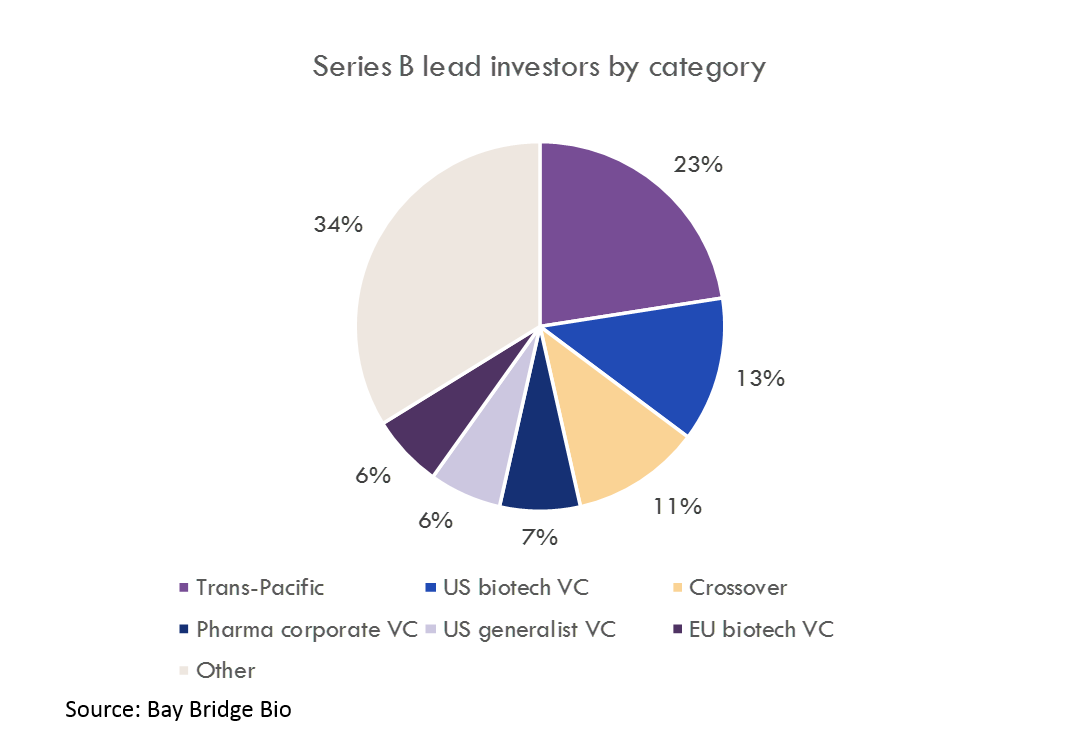 The biotech startup phenotype has changed, but the phenotype of biotech founders has not.

But the world changed, and despite strong initial skepticism from investors and big companies, young CEOs built the defining tech companies of our generation.

The lessons from the last two decades of software startups are the same as the lessons from the golden age of biotech: when technology is moving quickly, technologist-founders outperform. When the playbook has yet to be written, innovation becomes more important than experience. When technological challenges are daunting, naivete is an asset.

But if young biotech founders are so great, why aren't they starting great companies?

Without a supportive ecosystem, young software engineers would not be building as many successful tech companies.

With support from early-stage biotech VCs, experienced pharma executives would not be building as many successful biotech companies.

There is very little support for young biopharma founders, so it's not surprising they are not starting many successful companies.

How can we support the next generation of biotech entrepreneurs?


Experienced pharma executives aren't expected to go to a biotech VC with a fully fleshed out idea. Biotech VCs have built impressive platforms to support these executives: funds hire them as venture partners or entrepreneurs-in-residence, support them with a team of junior investors to find ideas, conduct diligence and manage the company through the seed-stage, and plug these execs into the fund's knowledge network.

Young software engineers benefit from an amazing amount of free, high-quality educational content on how to start a startup, a large and supportive peer network, and a huge group of early-stage investors with a pay-it-forward attitude. Tech venture funds have built platforms to compensate for the weaknesses of young founders -- lack of experience and networks -- and supercharge their strengths.

But young scientist-founders have different needs than experienced pharma execs or young software engineers. Young scientists need mentorship, training and education on the drug development process, relationships and networks, and funding, among other things. It takes some work to find and support these entrepreneurs, but those who make the effort will find a huge untapped pool of brilliant, creative, resilient and energetic young scientists, with fresh ideas and open minds. At a time when pharma R&D productivity is approaching 0% and when talent is one of the biggest bottlenecks to innovation, supporting the next generation of entrepreneurial talent seems like a no-brainer.

4 Interestingly, these same technologies have matured over the years and are now supporting the next wave of “decacorns”.