After a historic boom, biotech’s losses in the last 15 months are approaching dotcom-bust level – and we may not have seen the worst yet. When the dust settles, what will the new normal look like?

Where things settle depends on what drove the boom, and whether those forces still exist. Specifically, how much of the value increase during the boom was driven by 1) fundamental value, 2) strategic value and 3) speculative value.

First, we have to understand how big the boom was.


How big was the boom?

To get a snapshot of how valuations have changed, we can look at the IPO market.

IPO valuations in 2021 were almost 4x higher in 2021 than in 2012-2013 (the beginning of the bull market). And the IPOs in 2021 were significantly riskier, with almost 8x as many preclinical companies on a percentage basis.

To make this more concrete: GW Pharma, which was acquired for $7B in 2021, went public in 2013 at a $130M post-money. That is almost one-tenth of the average post-money of 2021 IPOs (the average amount raised in biotech IPOs in 2021 was $180M). At IPO, they had one approved product, one in Phase 3, two in Phase 2 and one in Phase 1 (although the product that catalyzed the acquisition was preclinical at IPO).

Opportunities to invest in differentiated, derisked programs for under $500M mostly did not exist in 2021.


What drove this increase in valuation? We can break down the drivers of this valuation growth into three categories: fundamental value, strategic value, and speculative value:

Where is the new normal for biotech valuations? It depends on whether you think the valuation increase of the last decade is due to fundamental, strategic or speculative factors.

If you believe that biotech valuations have increased due to better fundamentals, i.e. new platforms like gene and cell therapy enabling development of valuable new drugs, or higher probability of clinical success due to precision medicine and a supportive FDA, or new technologies like AI, then you may think the floor is somewhere around here: 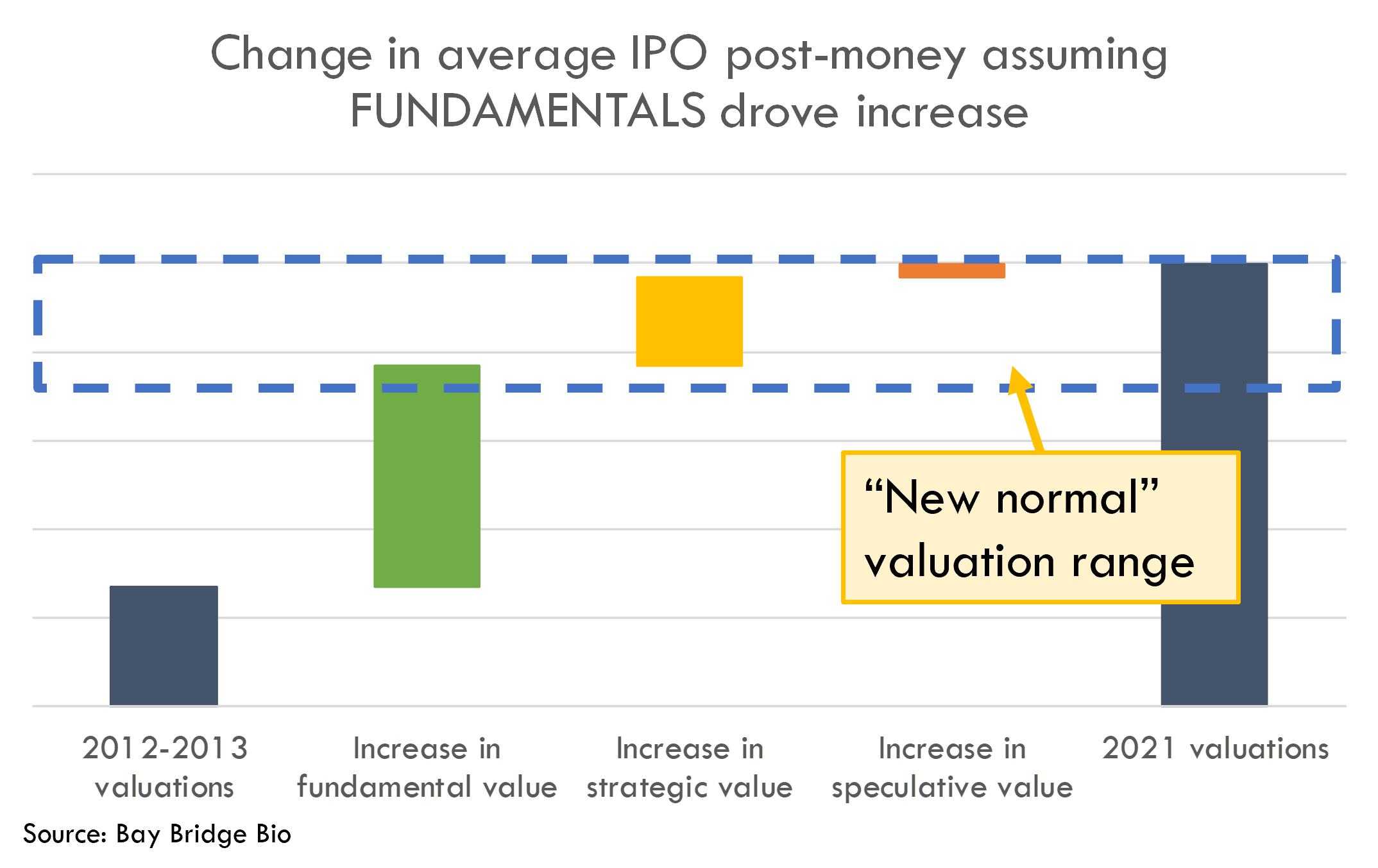 If you are in the fundamental camp, then the biotech market crash represents a huge buying opportunity. But if you are wrong, you could lose nearly everything: if the boom was speculative, but you think it is driven by fundamentals, you will be left holding the bag when the speculative frenzy subsides.

What if you don’t believe fundamentals have improved that much – perhaps you’ve seen the recent safety issues with gene therapies, the slow commercial uptake of cell therapies, and you aren’t yet convinced that precision medicine and AI will reduce the cost and risk of drug development (remembering Eroom's Law) – but you think that big pharma’s ever-increasing cash balances mean that M&A will increase now that startups are cheaper? Then you might think the floor is here: 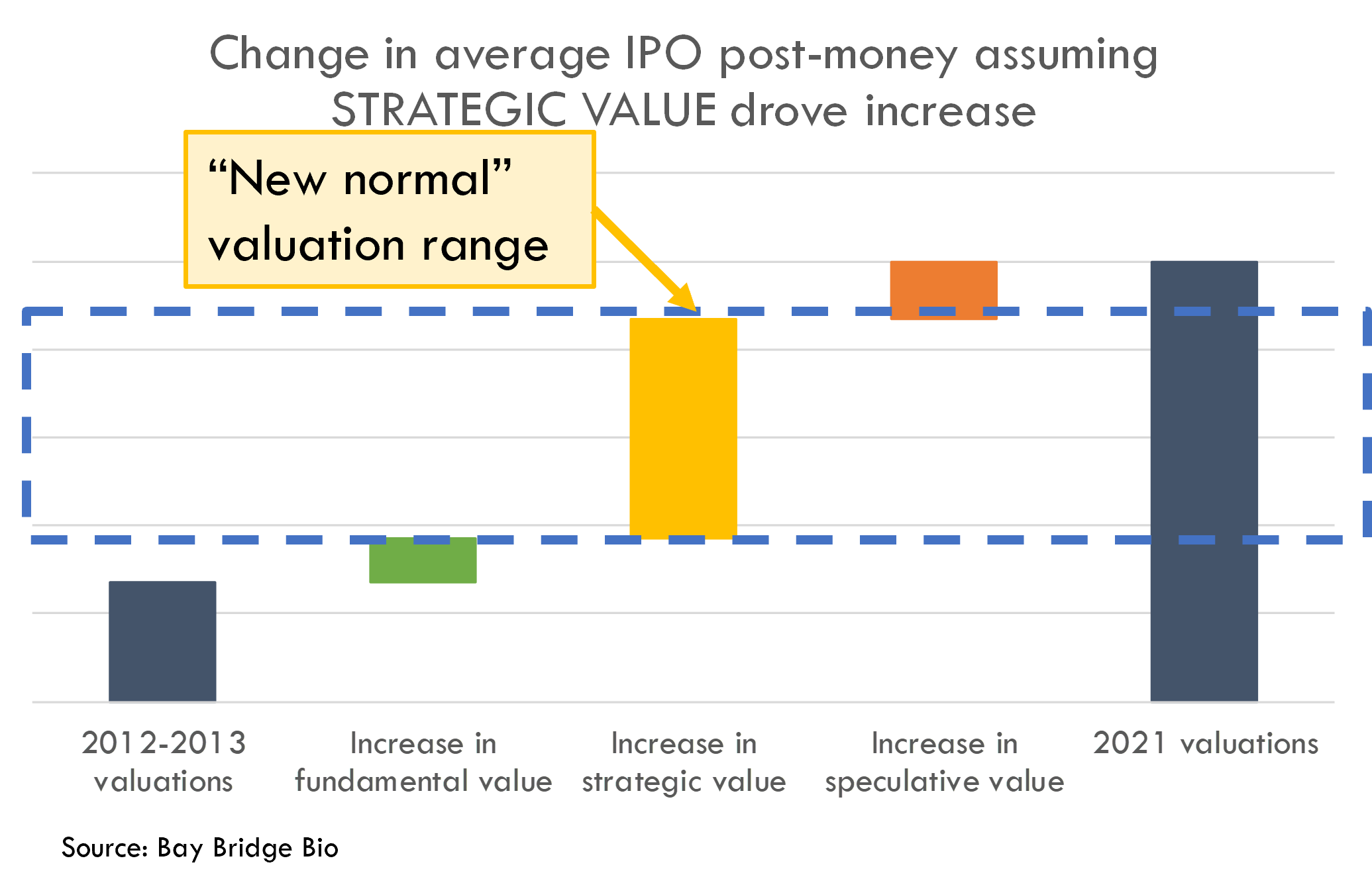 Those who believe the M&A thesis may think the crash represents a clear buying opportunity, but their belief may be a bit shakier. If they don’t see a big increase in M&A activity after a while, they may lose faith.

The fragility of the M&A thesis is illustrated by the market's reaction to the Biohaven acquistion announced May 11, 2022. The $11.6B acquisition is roughly equal to the biggest biotech M&A deal of 2021. The XBI jumped around 5% on the news (on a bad day for the rest of the market). But the XBI gave up all of its gains (and more) the very next day.

What if you don’t believe that fundamentals justify the big valuation increases AND you don’t think pharma will save the day? You attribute the market increase to speculation driven by the Fed. In this case, the floor is much lower: 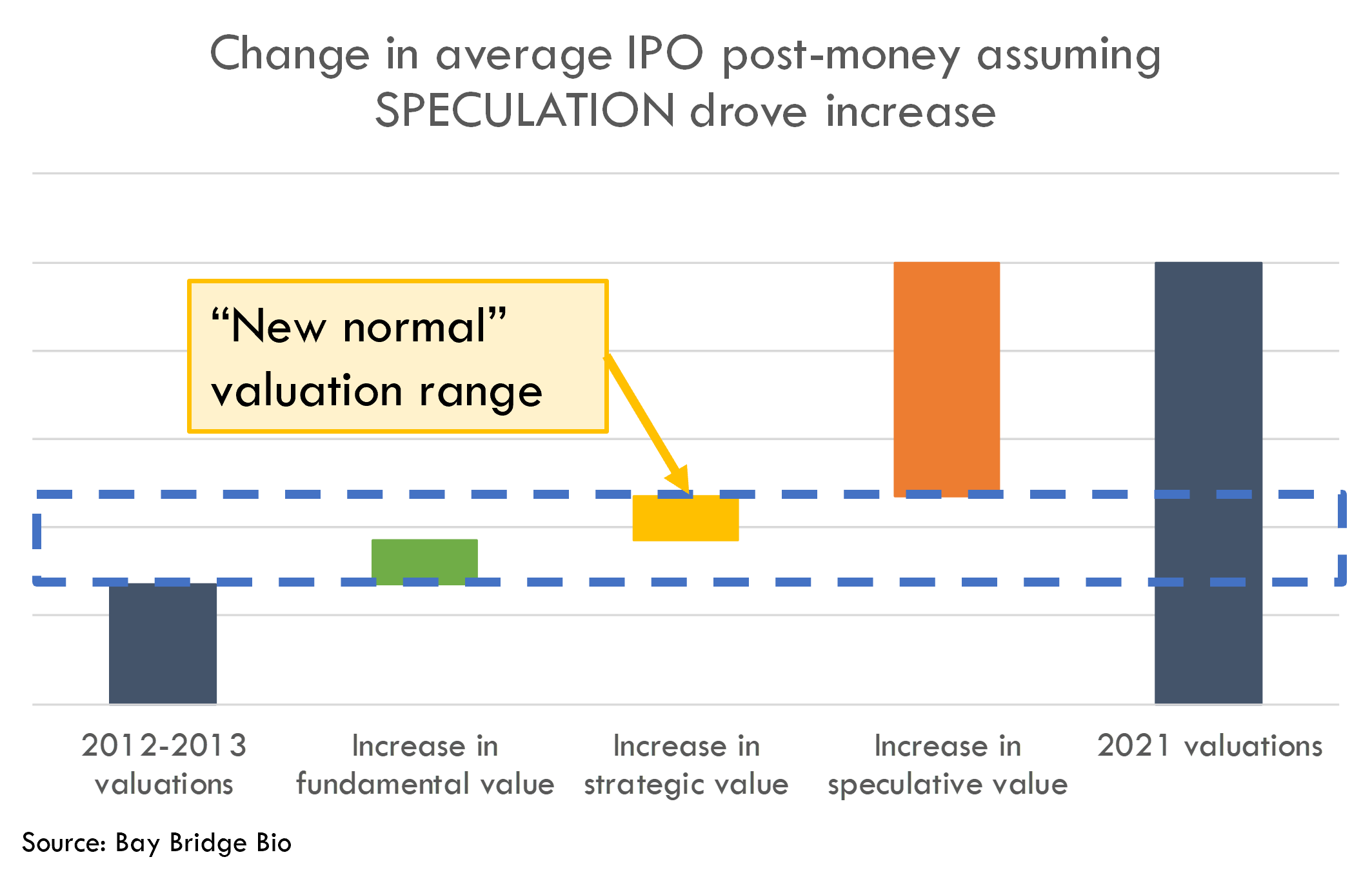 Investors in this camp think the market still has further to fall. If they are wrong, they will miss out on all of the gains from a rebound.


Where is the floor?


The lowest possible floor for the market would occur if the "speculative thesis" is true -- if most of the gains during the boom were driven by speculation. The true floor is probably higher than this, as there likely have been some improvement in fundamentals during the boom, but it represents a worst-case scenario.

Where is the floor under this worst-case scenario? If we assume that the speculative thesis is true, we can roughly quantify the level of speculation in the market by measuring the market's risk tolerance.


The IPO market represents the riskiest segment of the biotech public markets. Thus the amount invested into IPOs is a proxy for the risk tolerance of public biotech investors. But not all IPOs have the same level of risk: a preclinical company is inherently more risky than a Phase 3 company (all else being equal, or at least in the ballpark). And high valuations also represent increased risk appetite.

By combining these three indicators of risk (amount invested in IPOs, development stage of IPOs, and IPO valuations), we can get a rough sense of the risk appetite of public biotech markets1: 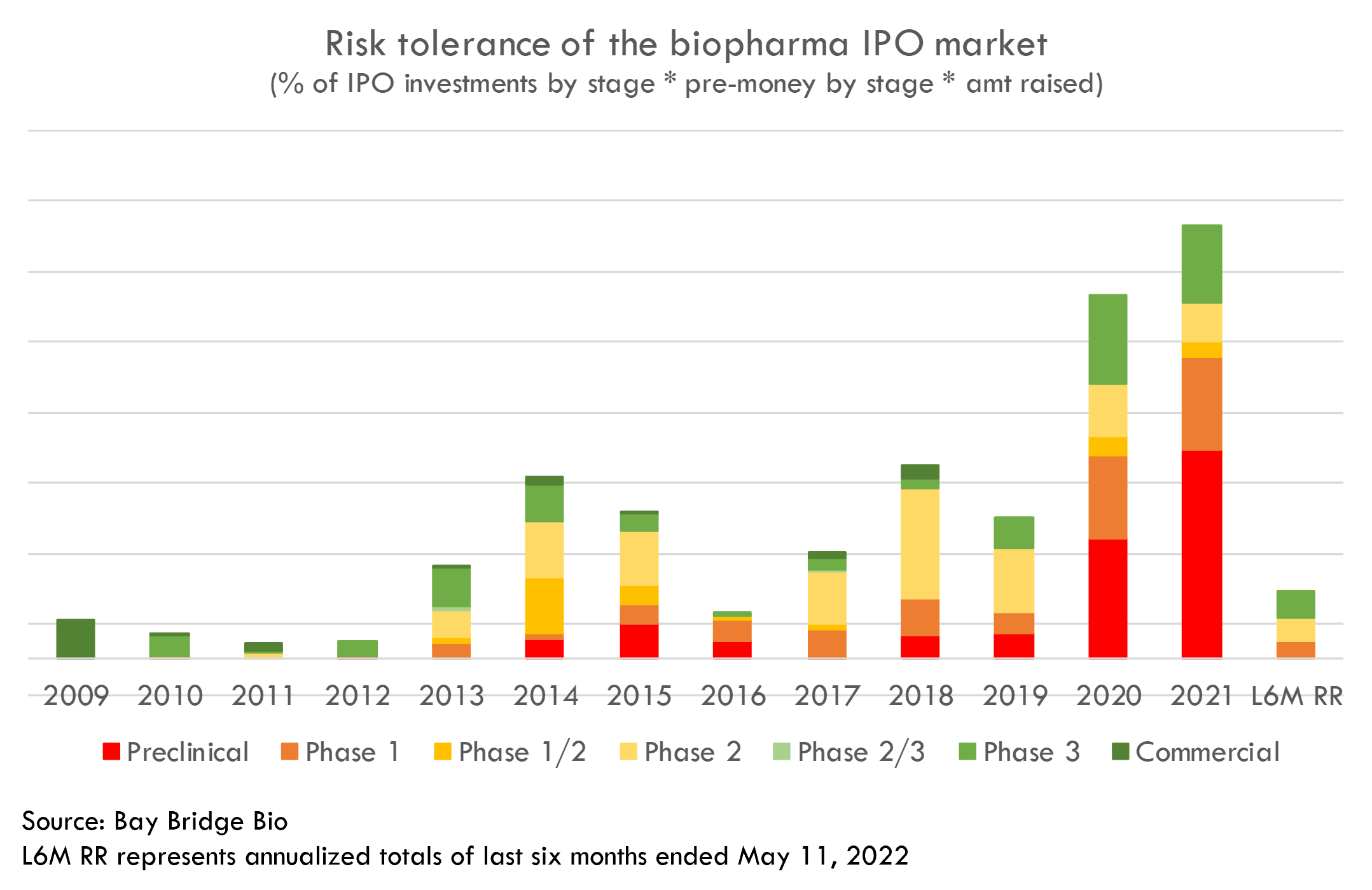 According to this metric2, the biotech market's risk tolerance in 2020 and 2021 was more than twice as high as it was during the 2014-2015 biotech bubble. And as we saw in a prior post, the 2015 biotech bubble was similar in magnitude to the dotcom bubble in terms of the NASDAQ / XBI’s outperformance compared to the S&P 500: 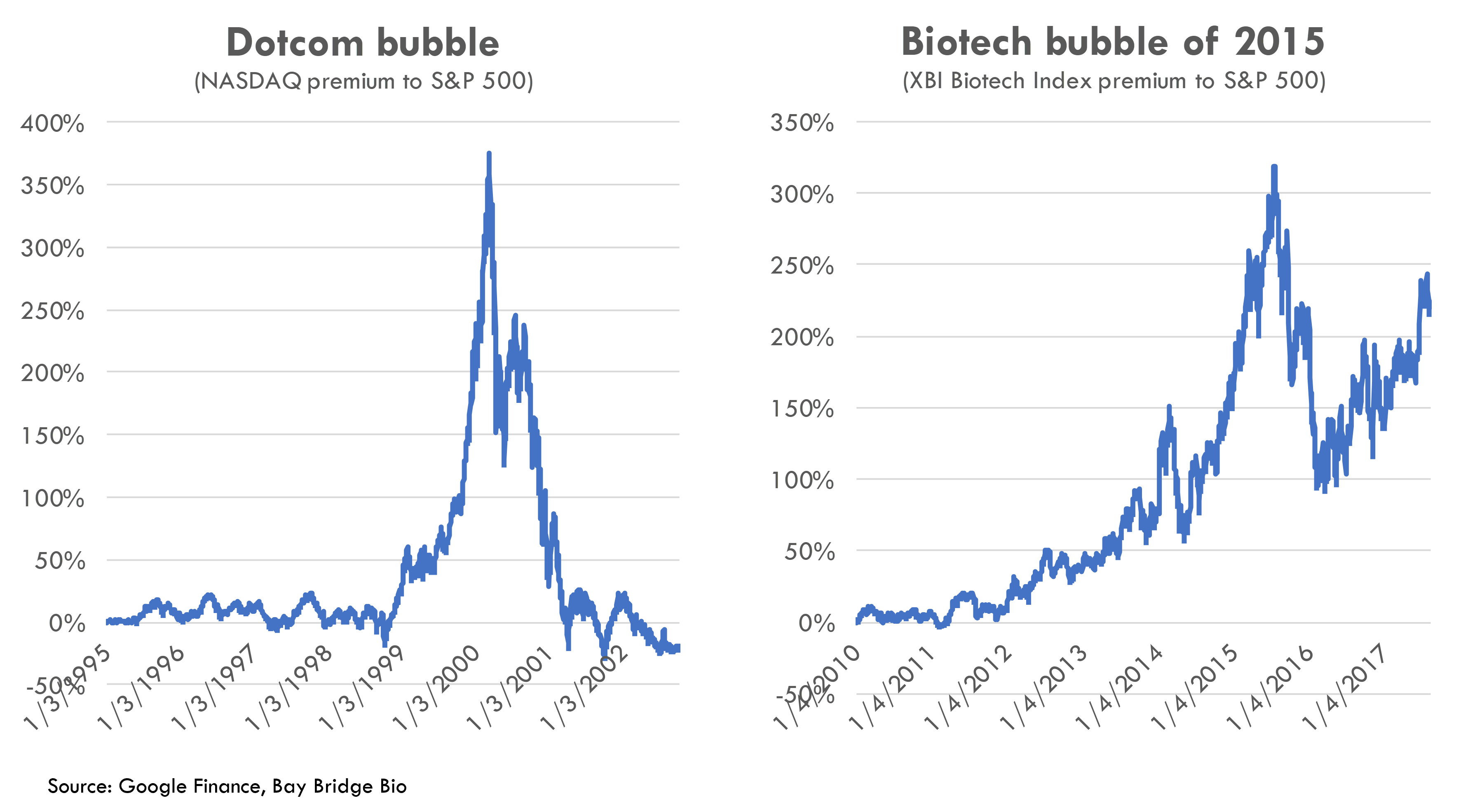 Although we don't measure our biotech risk metric back to 2000, the number and amount raised in biotech startup IPOs was higher in 2021 than in 2000. And the average IPO valuations were nearly twice as high in 2021 compared to 2000. This provides some support to the idea that 2021 was a bubble that was larger than the dotcom bubble. 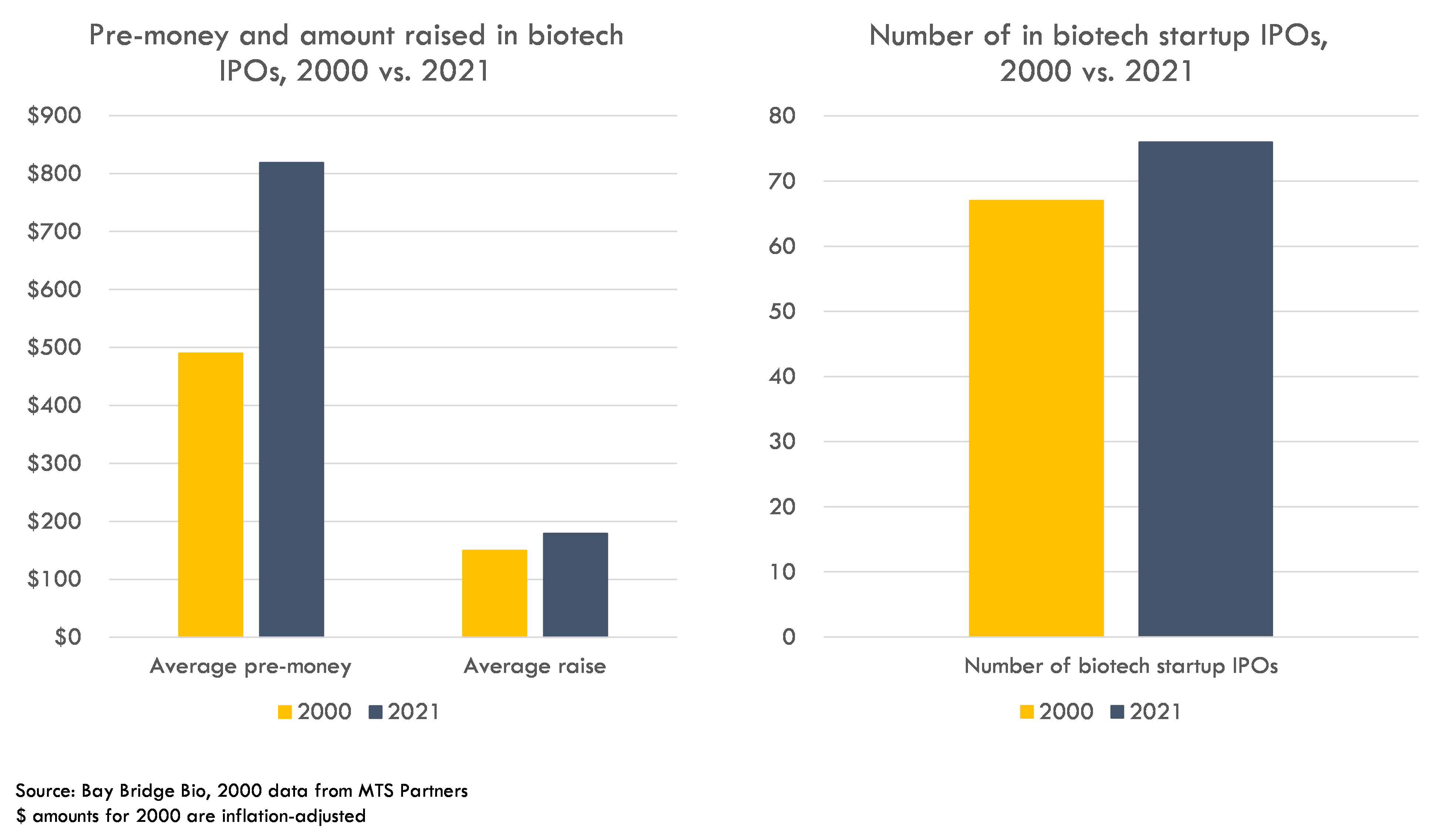 After the dotcom bust, tech stocks traded down almost 80% from their peak to trough. The XBI biotech index is down 60% from peak in February 2021 to May 10.

If the 2020-2021 bubble was bigger than the dotcom bubble, and biotech hasn’t yet fallen as far as dotcom stocks after the bust, then there is certainly more room to fall.


Of course, this is just a worst-case scenario -- it does not necessarily represent reality. If fundamentals truly have improved, this is a huge opportunity for investors, and funding markets will stay strong. Even if there is a sustained downturn, companies can emerge stronger by focusing on capital-efficient value creation and weathering the storm. This post (and others we've written about the downturn) are not intended to be pessimistic, but to help us and others understand what is going on so we can respond in the best way.

The good news for investors is that many of the riskiest biotech stocks are already trading well below cash. Those that have runway to survive the crisis and have solid pipelines could be huge bargains.

And the good news for companies is that while you can't control volatile funding markets, you can control your response to them. Every lasting company has to weather downturns. You can make decisions now to increase your chances of emerging from the downturn even stronger.

But those decisions are very different from the choices you'd make in a bullish market. It may feel strange to even consider things like changing your focus from scaling platforms to building products, shoring up your balance sheet at a flat or down valuation, or even trying to stay "default alive" by doing services or contract work.

This isn't to say that all companies should take drastic action. But if you haven't asked whether you are "default alive", and how to get there if you aren't, now is probably the time do so.


1 In reality, this measure cannot quantify how much of an increase in risk tolerance is due to speculation vs. improving fundamentals (ie if the probability of clinical success triples due to technological improvements, an increase in valuations of preclinical companies is justified by fundamentals). But because we are looking for worst-case floor, we assume that all increases in this risk metric are due to speculation.

2 This is calculated by multiplying the % of IPOs in each development stage by the average pre-money valuation of IPOs at each stage, and then adjusting that figure by the year’s overall IPO volume. This metric may understate risk tolerance because we don't quantify the difference in risk between companies of different stages (we just highlight different stages in different colors).