2018 biopharma VC funding passes $3B; China on the rise 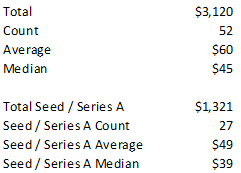 While a discussion of why this is happening is beyond the scope of this post (see here for that discussion), in short: there is an incredible opportunity for biopharma startups as biopharma R&D is shifting from big companies to small ones, demographic shifts are creating new unmet clinical need, and a perfect storm of innovation is opening new avenues to treat disease and more efficiently develop drugs. The exit environment is incredibly robust – we are arguably in the early innings of the era of the biotech decacorn – yet the number of new funded startups has not increased in over a decade.

These funding numbers are not surprising to people within the biopharma industry. However, the composition of these deals is quite different than in years past: 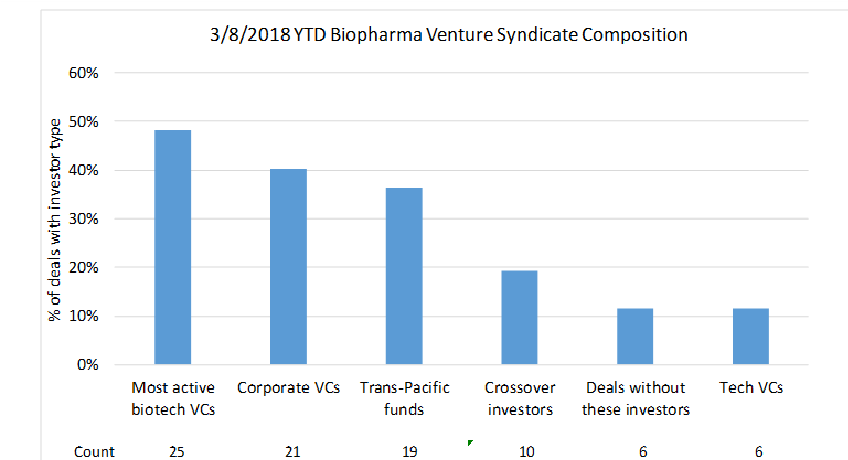 The exit environment is still incredibly attractive, and until that changes more money will continue to flood the sector. However, there has not been a meaningful increase in the number of funded startups. More money is chasing the same number of deals, so round size (and presumably valuation) is increasing. One problem seems to be that there is a very small universe of “fundable” founders. Most good (and funded) startups are created within a handful of VCs, or by experienced serial entrepreneurs. Starting biopharma companies is really hard to do right, so this makes sense.

The solution to this seems to be training and supporting the next generation of entrepreneurs. However, this isn’t happening (see “worry” number 4). Big pharma is cutting R&D, startups can’t afford to train on the job and outsource a lot of R&D, and most hands-on early stage industrial discovery work is offshored to Asia (WuXi has thousands of contract discovery scientists). With the abundance of capital and talent in China and rapidly increasing number of top-tier scientists setting up shop in the country, it isn’t unreasonable to think China will be the source of most biopharma startups within even a decade.

My personal belief is that the sector needs to support more young entrepreneurs. Many of the best startups these days are created by young associates within venture funds, and there are tons of incredibly capable young scientists who, with the right guidance and mentorship, could create incredible companies. Robert Swanson was in his late 20s when he founded Genentech, and David Goeddel was not much older when he joined. I run a program to support young entrepreneurs; if you are a young scientist looking to start a company, please get in touch!

1 I use the term "biopharma" to refer to startups developing FDA-regulated drugs to treat diseases; this does not include other life science sectors like diagnostics, devices, digital health, or consumer genomics.

2 My data differs a bit from Pitchbook’s, but overall the value is quite close. I just update this manually based on press releases, I don’t scrape Form D’s or anything. If I’ve missed any big deals, let me know!

3 While most of these deals are tranched (ie only a portion of the money is invested upfront with the remainder invested upon achievement of milestones), these are massive rounds.