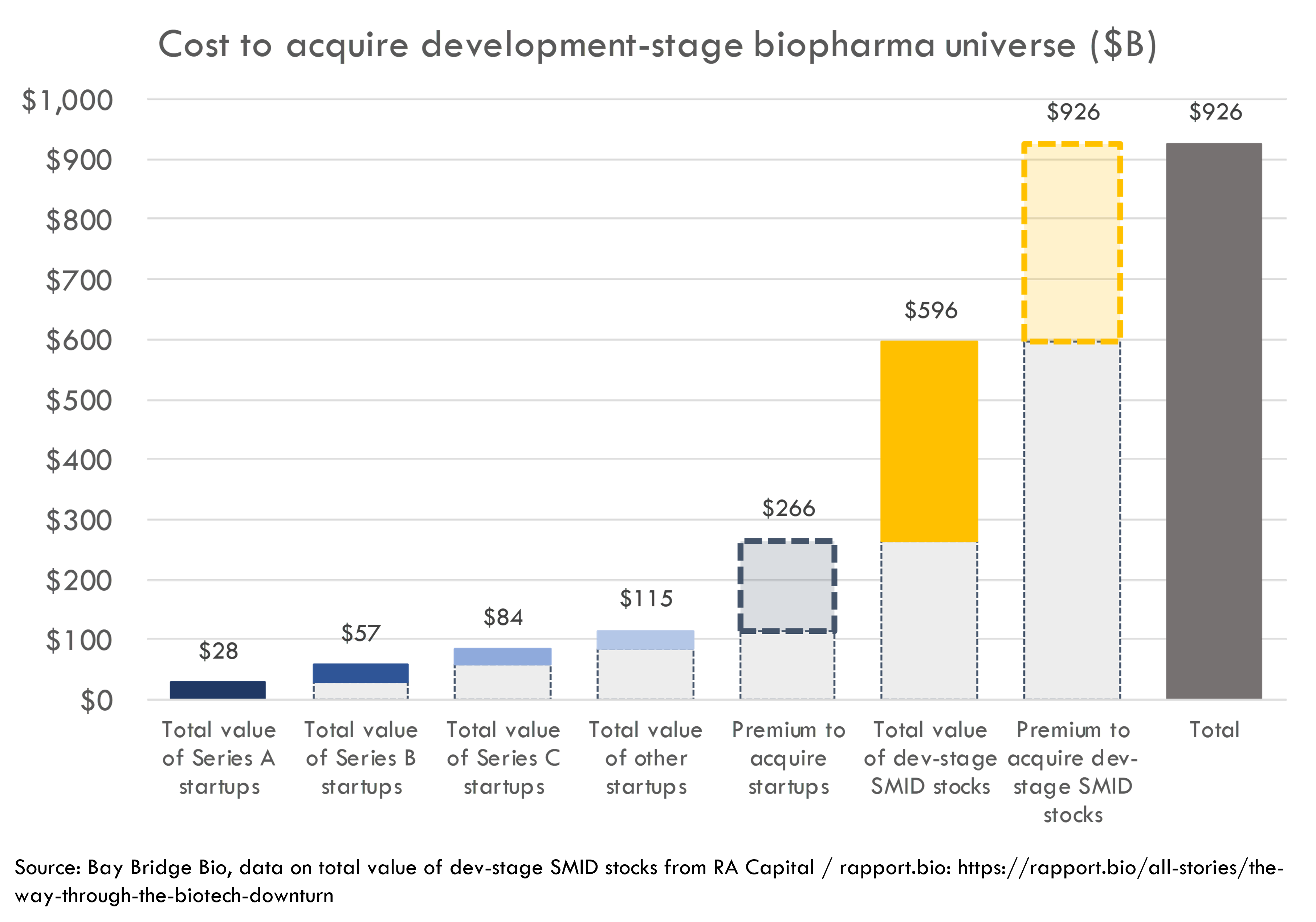 Recent reports from Jefferies, SVB Leerink, RA Capital and others have shown that big pharma has enough cash to buy nearly all small or mid-cap stocks. But these analyses did not include private companies.

How much of the biotech startup sector can big pharma afford to buy?

The answer is, theoretically, all of it. But realistically, startups (or small-to-mid-cap public companies) shouldn’t expect big pharma M&A to save the day. If companies were valued based solely on M&A potential, historical M&A trends suggest the average biopharma company is worth $30-80M.

Of course, most of the value of biopharma companies lies outside of their M&A potential. But with funding markets tightening, it's worth exploring the potential impact of M&A on valuations.


Geoffrey Porges and his team at SVB Leerink recently put out a research note suggesting that big pharma has $1.7 trillion of dry powder for acquisitions. 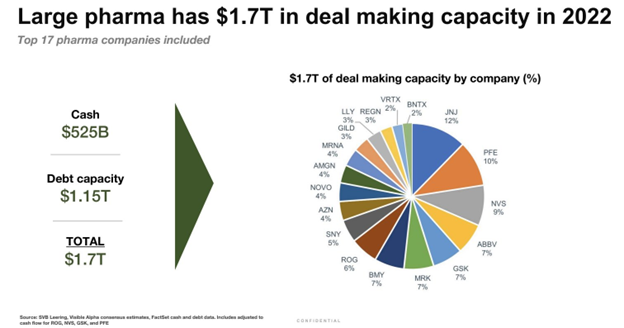 How much could big pharma buy with that dry powder?

Peter Kolchinsky and his team at RA Capital calculate that the cumulative market cap of all development-stage biotech with market cap of $50M-10B is $330B as of May 2022. Assuming every company is acquired for a 100% premium, it would cost $660B to acquire this group of companies.

The top 24 big pharma companies currently have $222B in cash and will have about $500B by the end of 2022, so they could theoretically buy all of these companies within 2.5 years without taking on more debt. If big pharma took more debt, they could easily buy the whole sector.


What about private companies?

We estimate the total value of all private venture-backed biotech startups is $115B. Assuming a 100% M&A premium, it would cost $230B to buy the whole private VC-funded biotech sector.

That means to buy all development-stage biotech companies would cost big pharma $926B.

We can compare this to big pharma’s theoretical ability to pay, including their current cash, expected 2022 cash flow, and estimated debt capacity: 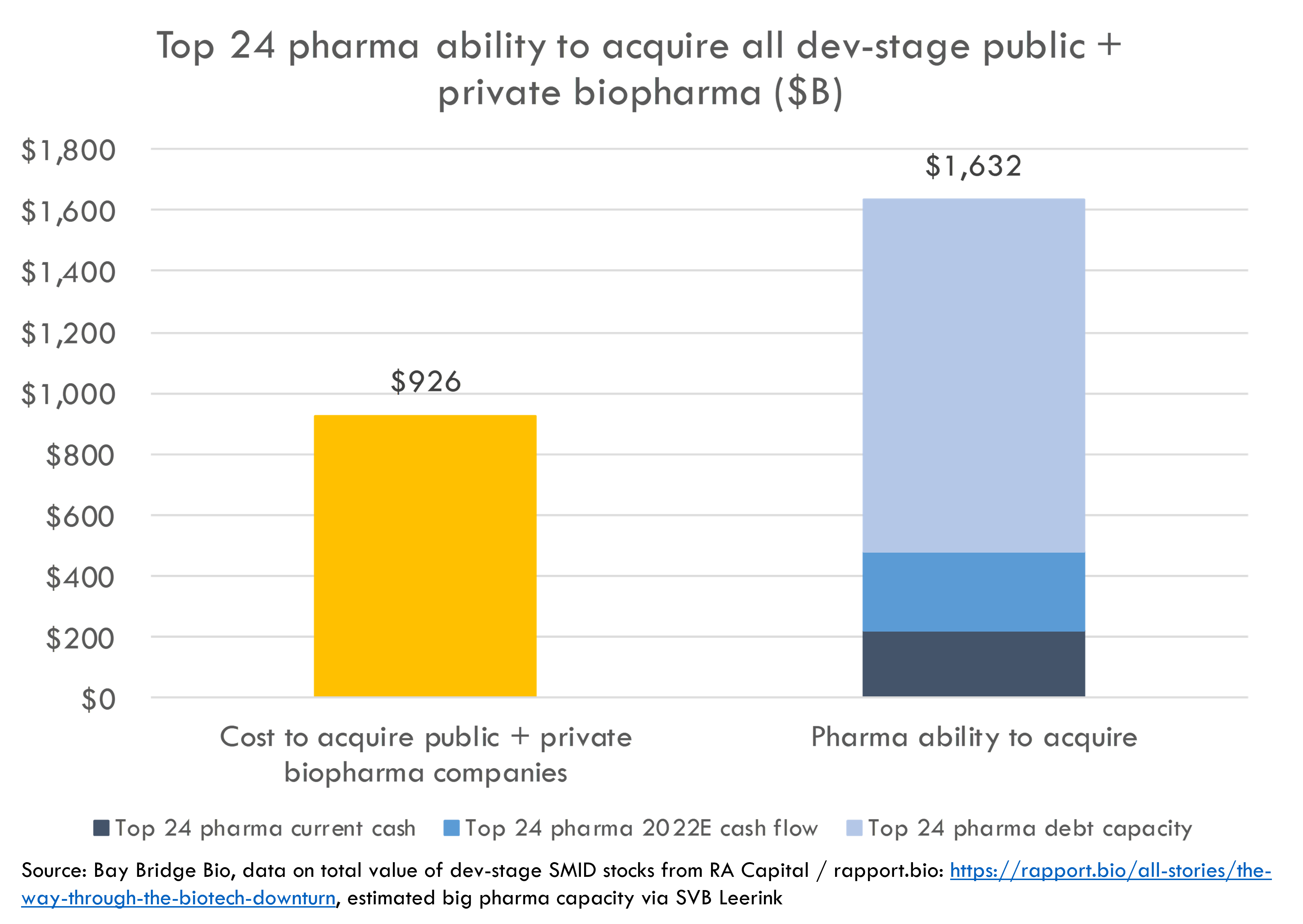 
Of course, this is purely theoretical math. What matters isn’t what pharma could theoretically do, but what they might realistically do. The best guide we have for what pharma might realistically do is what they’ve done in the past. To understand M&A’s impact on startup valuations, we can look at look at big pharma’s acquisitions of private companies, as well as overall M&A activity including public and private companies. 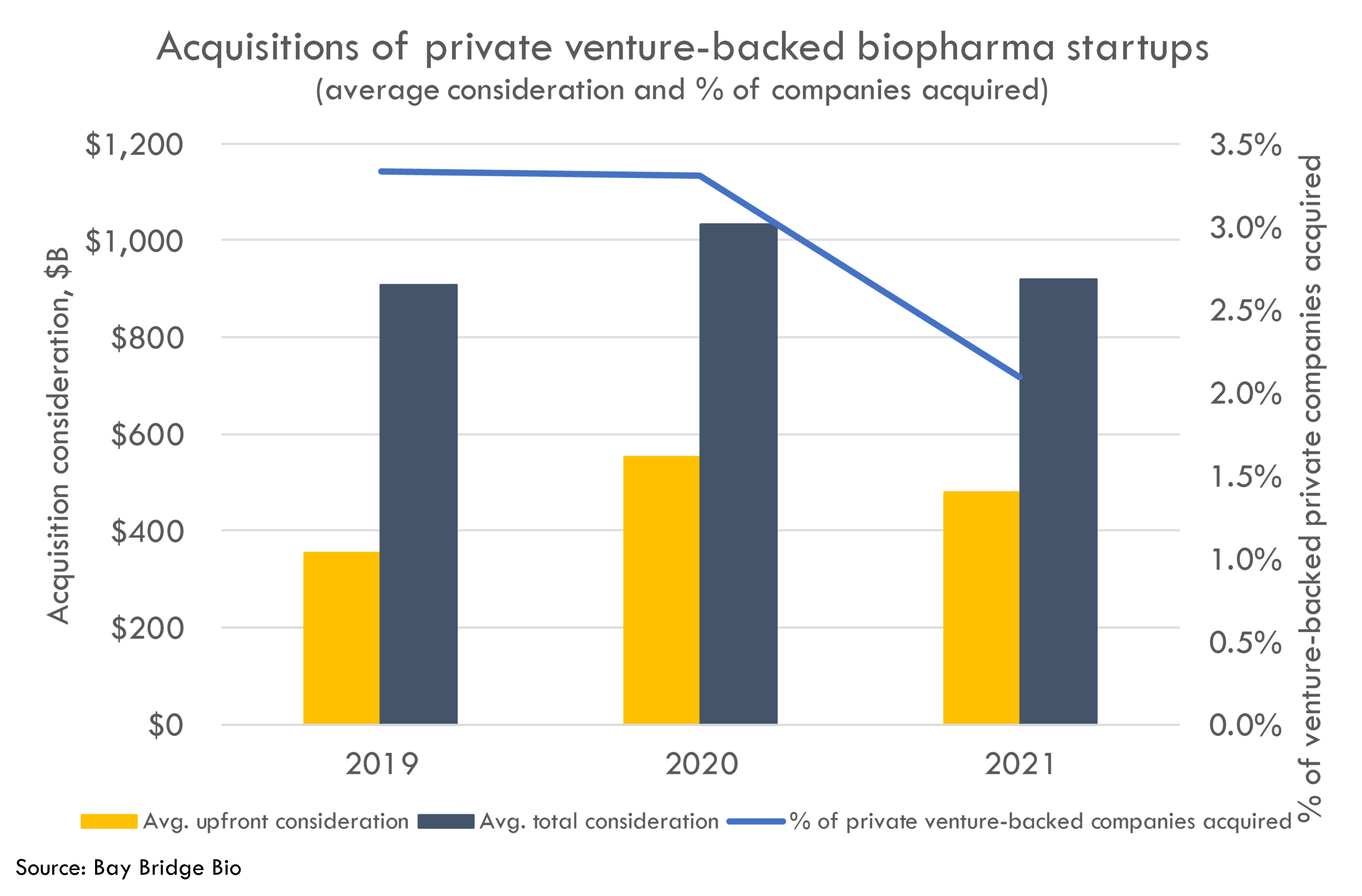 To estimate the value of private companies attributable to M&A, we can multiply the average price paid to acquire companies by the percentage of companies acquired in a given period.

We calculate the percentage of private companies acquired each year by dividing the number of acquisitions by the number of venture-backed private companies. We only include big pharma acquisitions of biotech startups with over $75M paid upfront in a given year, and startups that raised venture capital within two years. We exclude companies that have just raised seed or pre-seed capital, as these are much less likely to be acquired for a meaningful amount.

Over the last three years, roughly 3% of private VC-backed biopharma startups are acquired each year. The average upfront payment is $300-500M, and the average total consideration including biobucks is $900-1,000M.

If these historical patterns continue, the expected M&A value of private VC-backed biopharma companies is $28M ($13.4M upfront and $14.5M in biobucks). In other words, if the IPO market is closed, companies cannot raise further funding, and M&A is the only option, the average biopharma startup is worth $13-28M.

This is obviously quite low – an order of magnitude lower than average startup valuations. This is because over the last several years, most of the expected value of biopharma startups comes from their IPO potential + potential performance as a standalone public company.

With the IPO market slowed, the expected IPO value of startups is lower. But we can expect more startups to choose the M&A path now that the IPO market is tougher. The frothy IPO market meant startups got a better deal by going public than selling early to pharma. With IPOs no longer a credible option for most companies, more private companies will likely choose to sell. So we need to look at pharma’s overall acquisition activity, not just their acquisitions of private companies.


Our database just covers startup M&A (public and private), so we need to look elsewhere for data on all biopharma M&A including acquisitions of mature companies. We can reference this recent Evaluate Vantage report for data on overall value of M&A and number of deals: 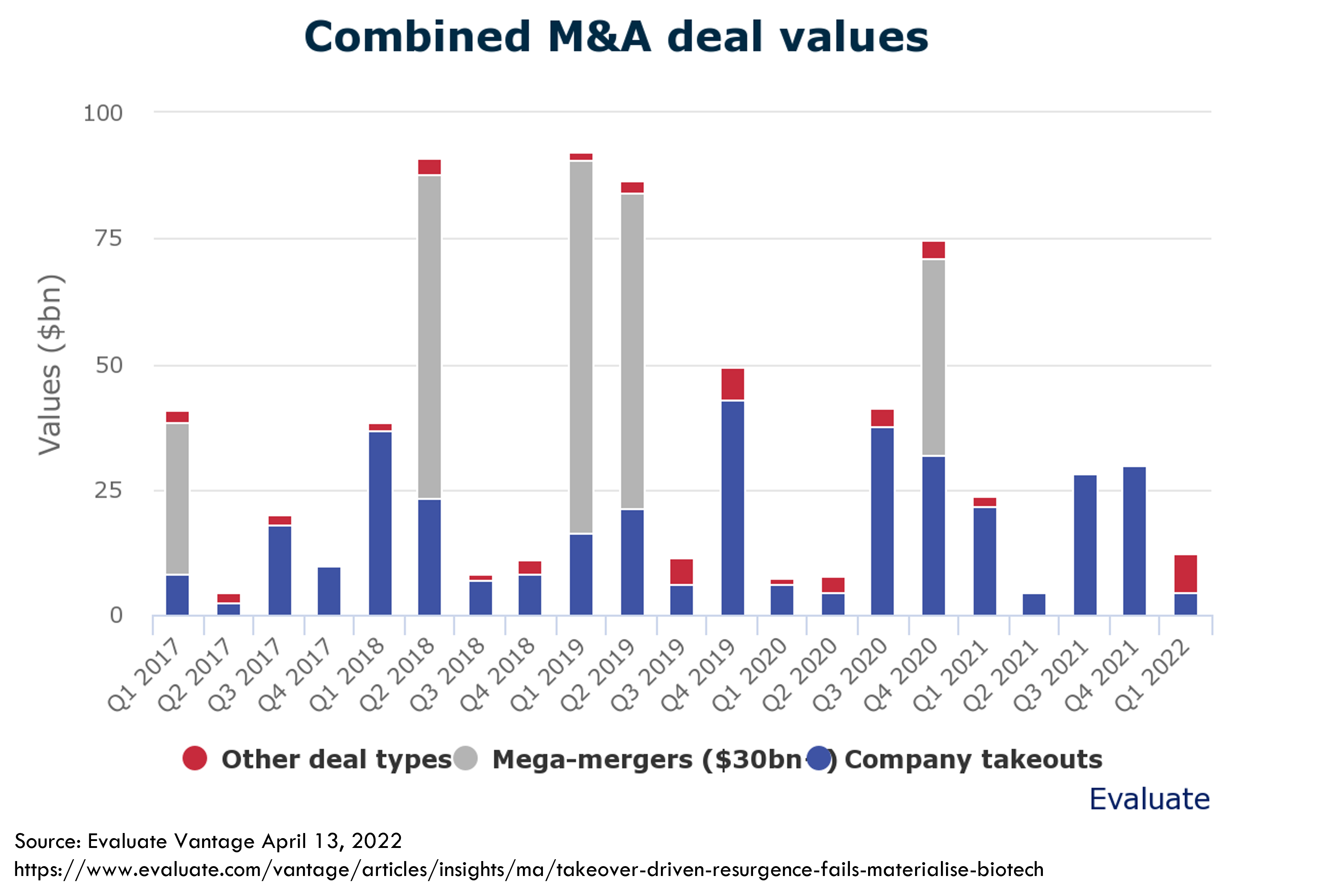 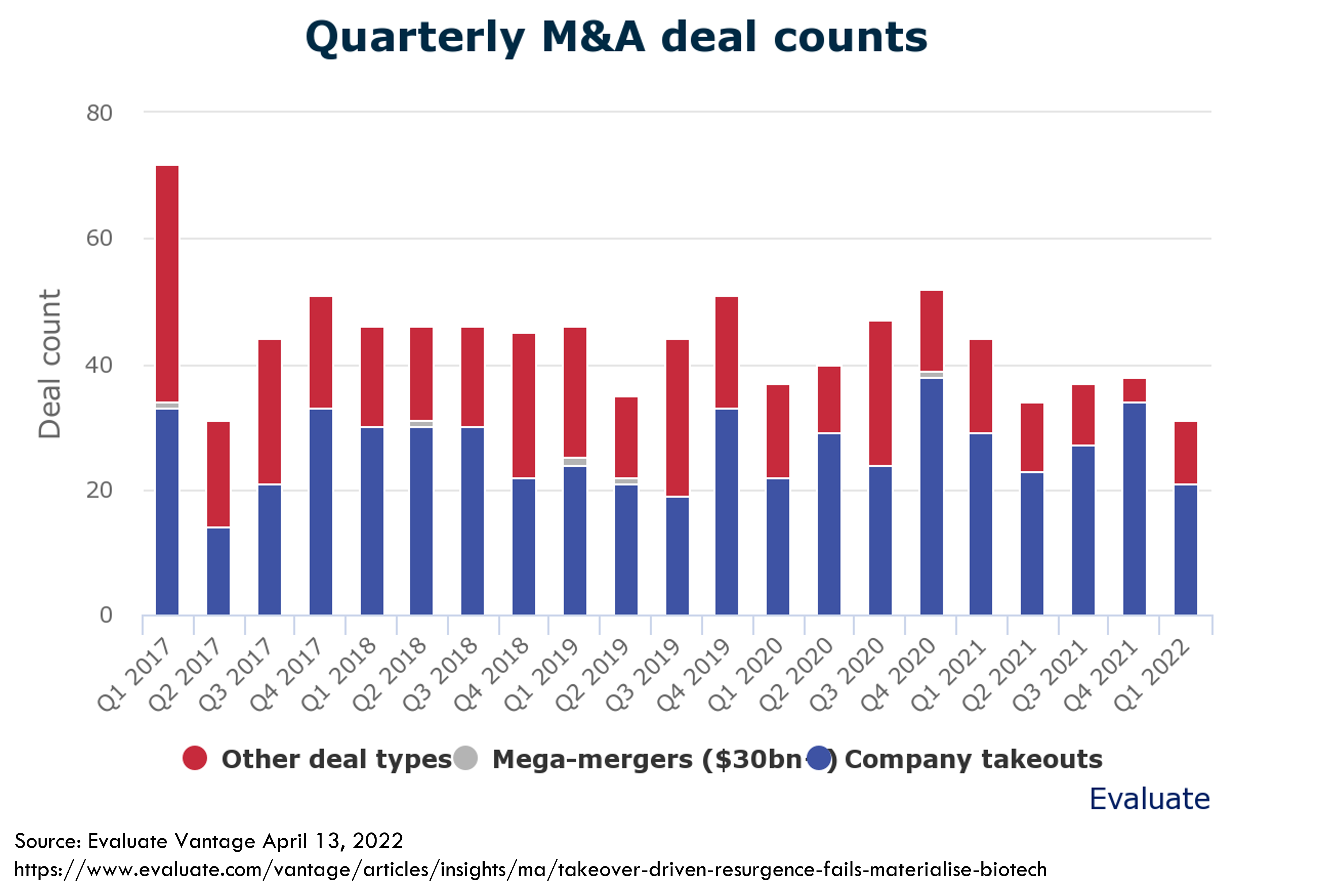 We use a similar methodology to the above, but we include all biopharma deals, not just private deals. We calculate the percentage of companies that are acquired by dividing acquisitions per year by total public biotech stocks + venture-backed startups (those that raised venture capital within two years). 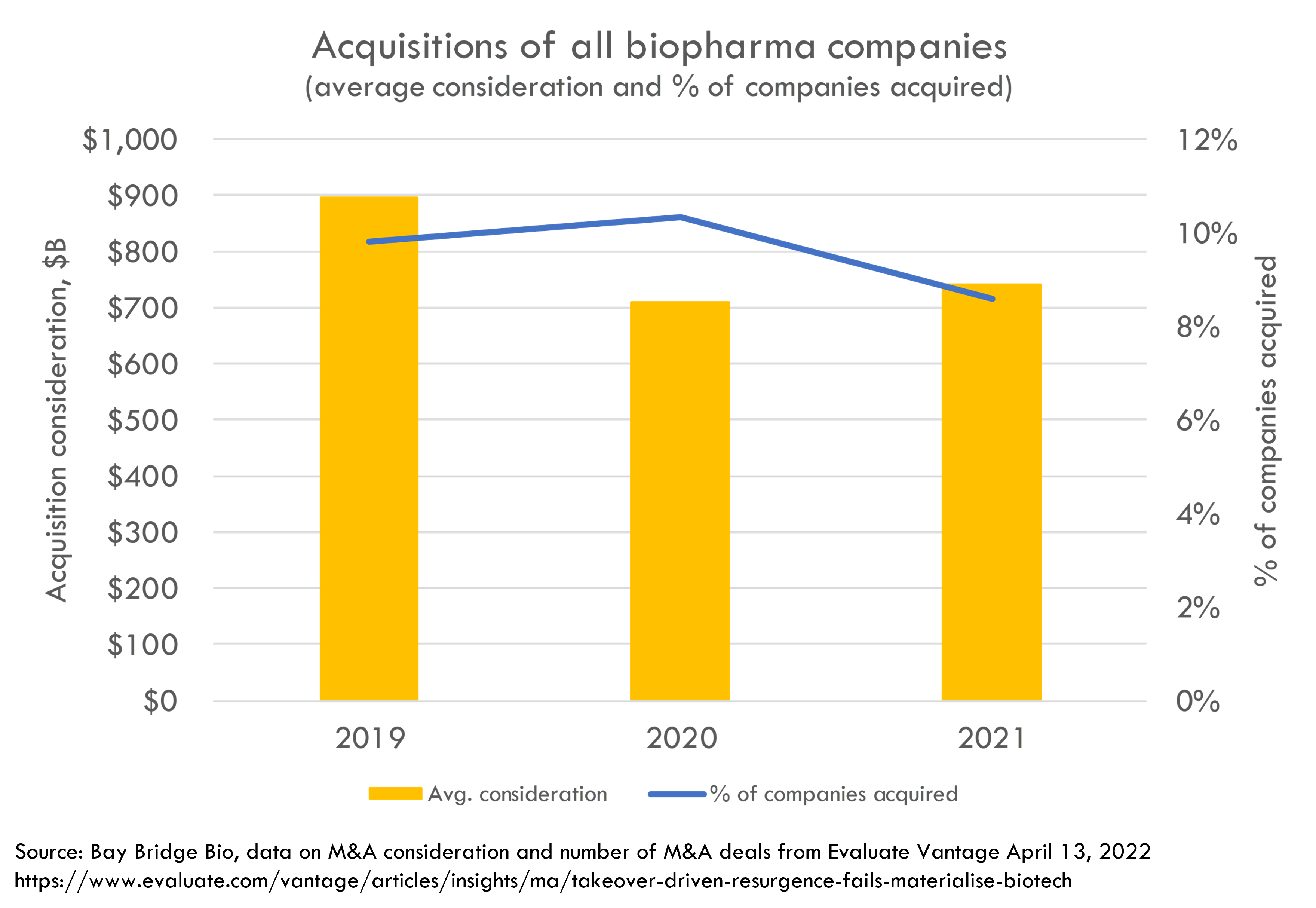 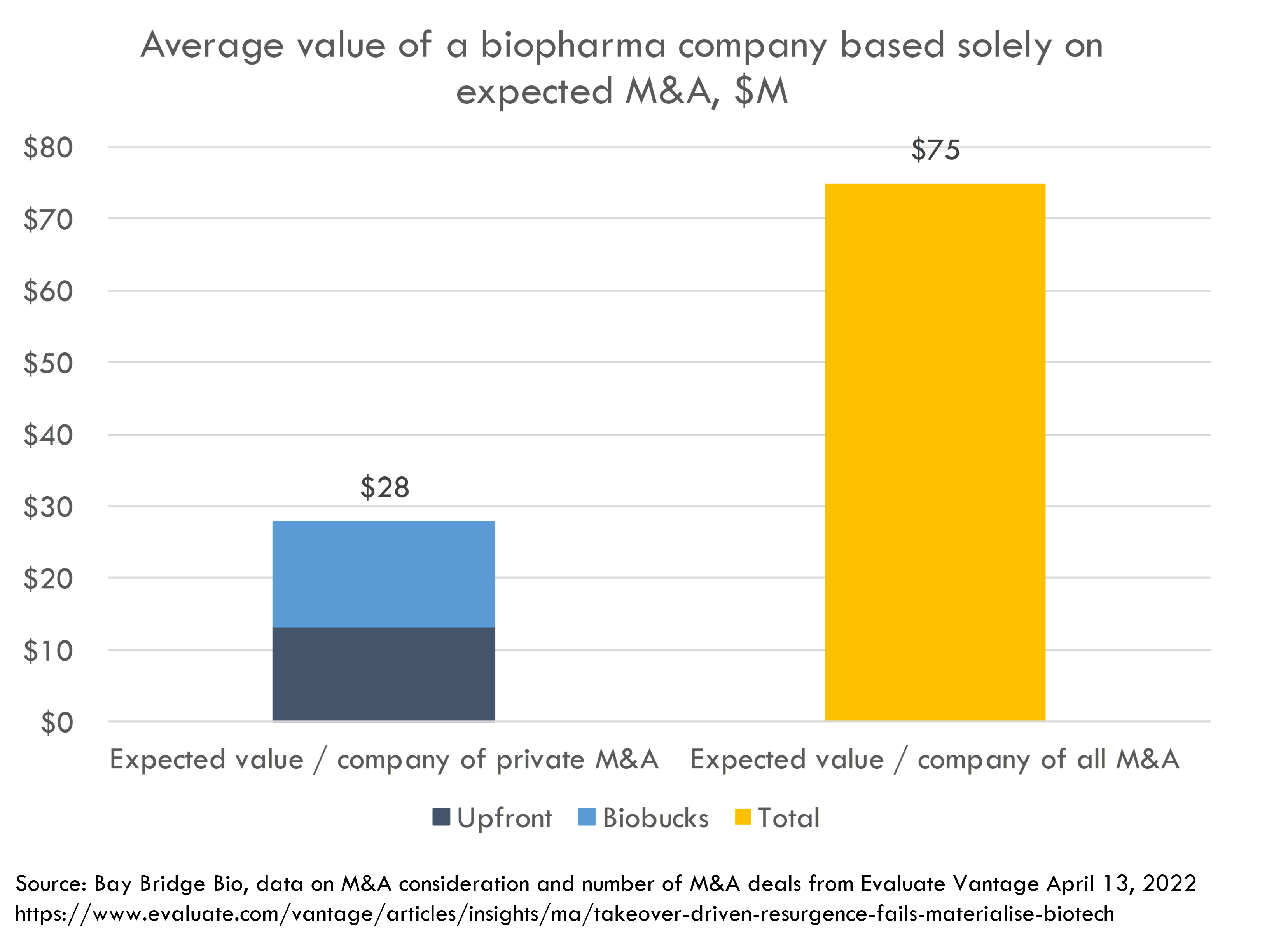 This is still considerably lower than the average valuation of all public and private biopharma companies. This suggests that investors expect many of these companies to commercialize their own products and become profitable, or that investors overestimate the likelihood that the average company will be acquired (at the current pace of VC, IPO and follow-on investment, M&A is not keeping up with new investment, so even at time horizons greater than one year, expected M&A value will not increase unless fewer companies are funded).

I am quite surprised at the magnitude of the delta between expected M&A value and actual valuations. I would love to hear feedback and thoughts, as I feel like I may be missing something here.


Fortunately more investors than ever understand the long-term potential of biotech companies and view innovative biotech startups more as quick flips to pharma. This is good, because at current valuations, investing in biotech based solely on expectation of M&A is a negative-expected value bet, unless investors are able to accurately predict which subset of companies will be acquired (I’d imagine investors are able to do this, as there are probably many companies that can be ruled out as M&A candidates) or pharma meaningfully picks up its M&A pace.

But this increase in M&A would have to be dramatic. Even if pharma doubles its pace of M&A over the next few years (which means that pharma will spend over half of its free cash flow on M&A), the expected M&A value of a random company is still lower than the current valuation of a random company.

Pharma can do a lot with excess cash: invest it internal R&D, manufacturing capacity, or commercial infrastructure; do licensing agreements with smaller companies; or simply buy back shares or pay dividends. Pharma will weigh the potential benefits of using its cash to buy startups against all of these other alternatives.

It is possible that big pharma increases its M&A activity significantly, as it did post-2012 patent cliff. Many blockbusters will be going off patent over the next few years. But big pharma didn’t increase its M&A dramatically until AFTER the 2012 patent cliff. Perhaps pharma has learned their lesson and will try to pre-empt the pain this time. Or they may have already done enough to pre-empt the pain by bolstering their pipelines via acquisitions and licensing deals over the last few years.

It may be the case that M&A picks up significantly, or it may not. But this analysis suggests that only a significant increase in M&A activity will meaningfully turn the tide of falling valuations. In the interim, dispersion of valuations and returns will continue to increase, as investors will likely flock to companies viewed as the most likely M&A targets as well as companies with strong standalone potential.

Recently pharma has focused on acquisitions of derisked companies, rather than ambitious early-stage platforms. The IPO market that led many investors to fund platform companies has dried up, and venture funding may shift from IPO-able to acquirable assets. Companies with ambitious platforms should continue to develop their platforms, but it may be wise to build the platform with a product-first approach, rather than focusing on KPIs linked to platform scale.

After all, that's how Genentech was built -- the goal of their platform was to produce commercially and clinically differentiated best-in-class products. In the words of Bob Swanson, who founded Genentech as CEO when he was in his 20s: "let the product drive the science, rather than the other way around".


We can estimate the total valuation of private biotech startups a couple ways:

We will use the latter methodology, because our sample of private company valuation data is biased towards companies that raised larger rounds (average round size in our sample of deals where we have valuation data > average round size for all deals). However, the percent of equity bought per round is fairly consistent across companies and round sizes. Percent of equity bought is a less-skewed metric than amount raised and post-money, so our calculation won’t be as impacted by the bias of our sample towards companies raising larger rounds.

For this analysis, we will look at all private companies that raised capital in 2020 or 2021 (assuming that haven’t raised since January 2020 are no longer operational). We exclude companies that were acquired or went public. We also exclude seed or pre-seed companies, as it is harder to track all of these and their valuations, and they are less likely to be acquired for a meaningful amount. We only count one round per company, so if a company raised a Series A and then a Series B, we only include the Series B valuation.