Will a recession save biotech? 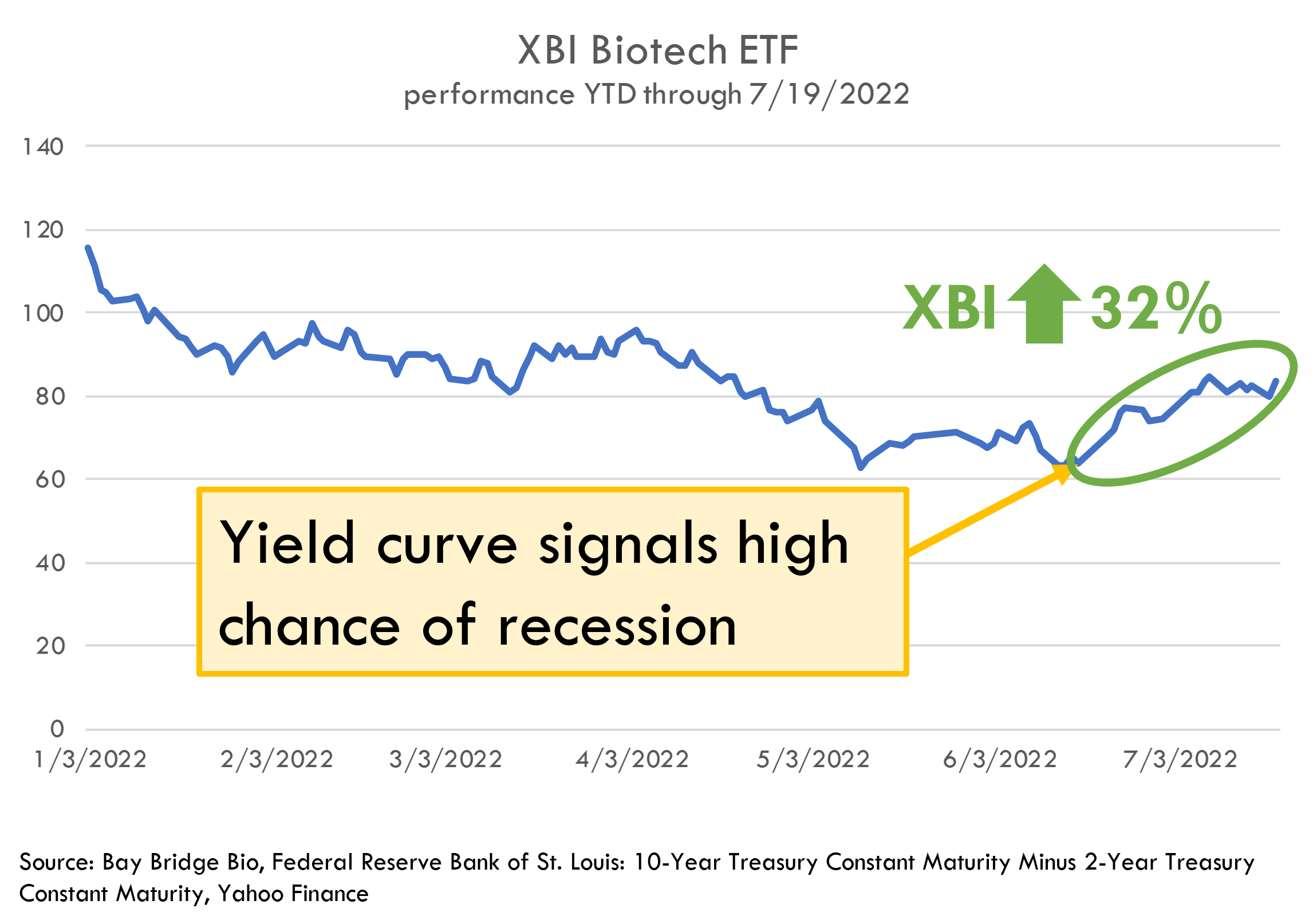 After a brutal year and a half, biotech stocks finally had a good month. But the cause of the rebound is an unlikely one: an impending global economic recession.

How would a recession help biotech? Investors are betting on biotech for three reasons:

Whether these arguments hold water is up for debate, and there is a case that the current rally is just a mirage. But investors have been placing their bets that biotech has bottomed.


Why are investors expecting recession?


Investors expect the Federal Reserve to lead the economy into a recession.

Why would the Fed do this? A big part of the Federal Reserve's job is to control inflation, which it does by increasing interest rates. Faced with the highest inflation in decades, the Fed is aggressively hiking rates.

High interest rates tend to constrict economic activity by decreasing the amount of money in the economy, and thus decreasing the demand for goods and services. Sufficiently rapid rate increases can cause recession.

But inflation has been high for a while, and investors have bet that the Fed could control inflation without causing a recession -- achieving a "soft landing". Why do investors suddenly think that inflation will cause a recession?

Prior to the June CPI reading, many investors thought inflation had peaked. This would make the Fed's job easier, and increase the odds of a soft landing. On June 10, 2022, however, a higher-than-expected inflation reading led to a dramatic last-minute major rate hike from the Fed. The Fed stated that its actions to control inflation may lead to recession, but that controlling inflation was more important than avoiding recession. This was enough for markets to give up most hope for a soft landing.

In a sign that the market believed a recession was inevitable, the yield curve inverted 1 after the June CPI reading and the Fed's response.


How did the market respond to heightened recession fears?


One might expect higher-than-anticipated inflation combined with recession fears would be bad for stocks. After all, inflation -- and the Fed's response to it -- has hammered nearly every asset class over the last 6-18 months. 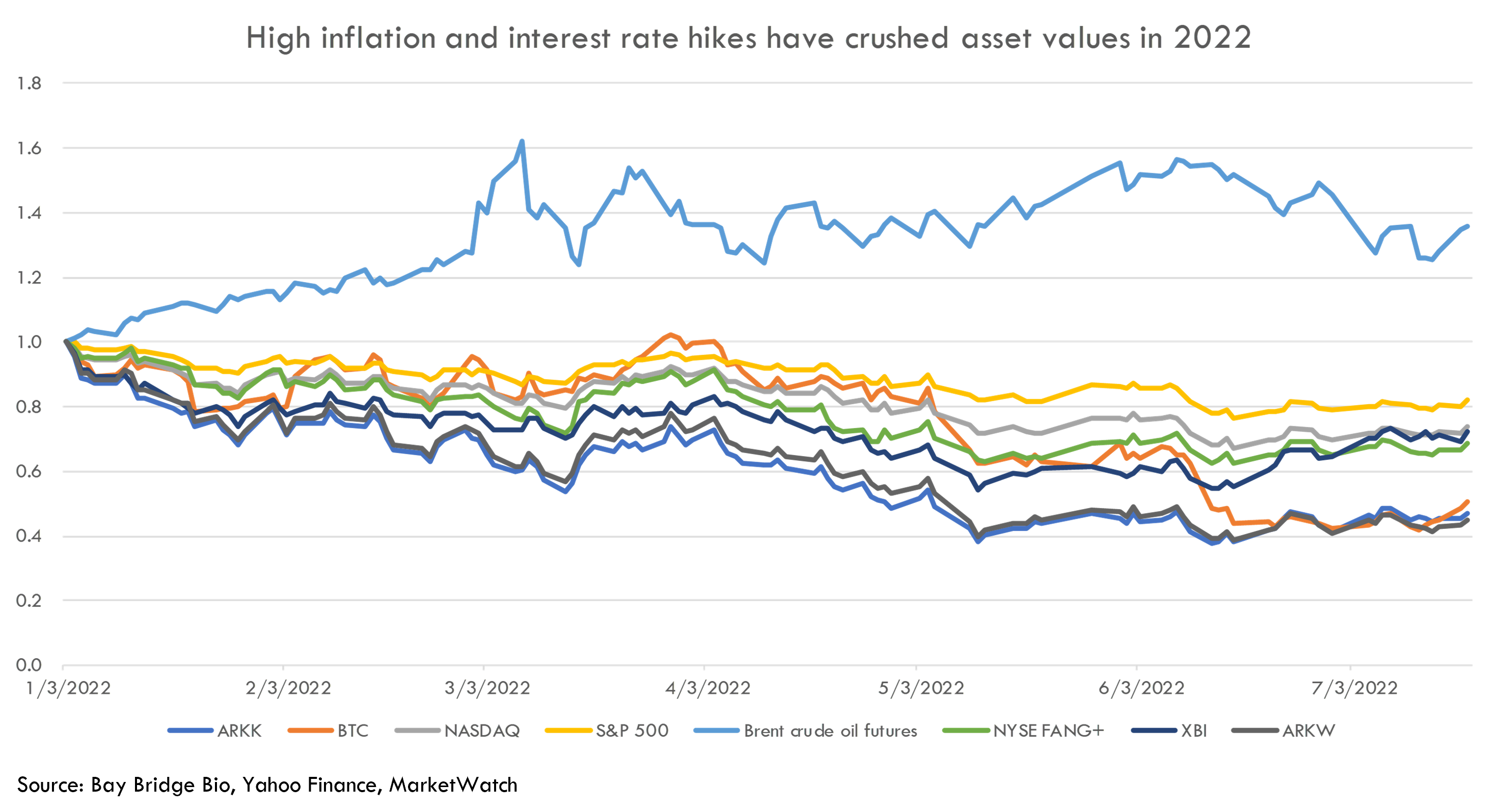 The above chart tells the story of inflation's impact on markets through 2022. Virtually all equities -- and especially risk assets -- have gotten crushed. And commodities like oil, which has been one of the main drivers of inflation, have increased dramatically.

So it is a bit counterintuitive that, all of a sudden, high inflation would be good for growth stocks. But growth stocks rose after the June CPI reading and the Fed's response: 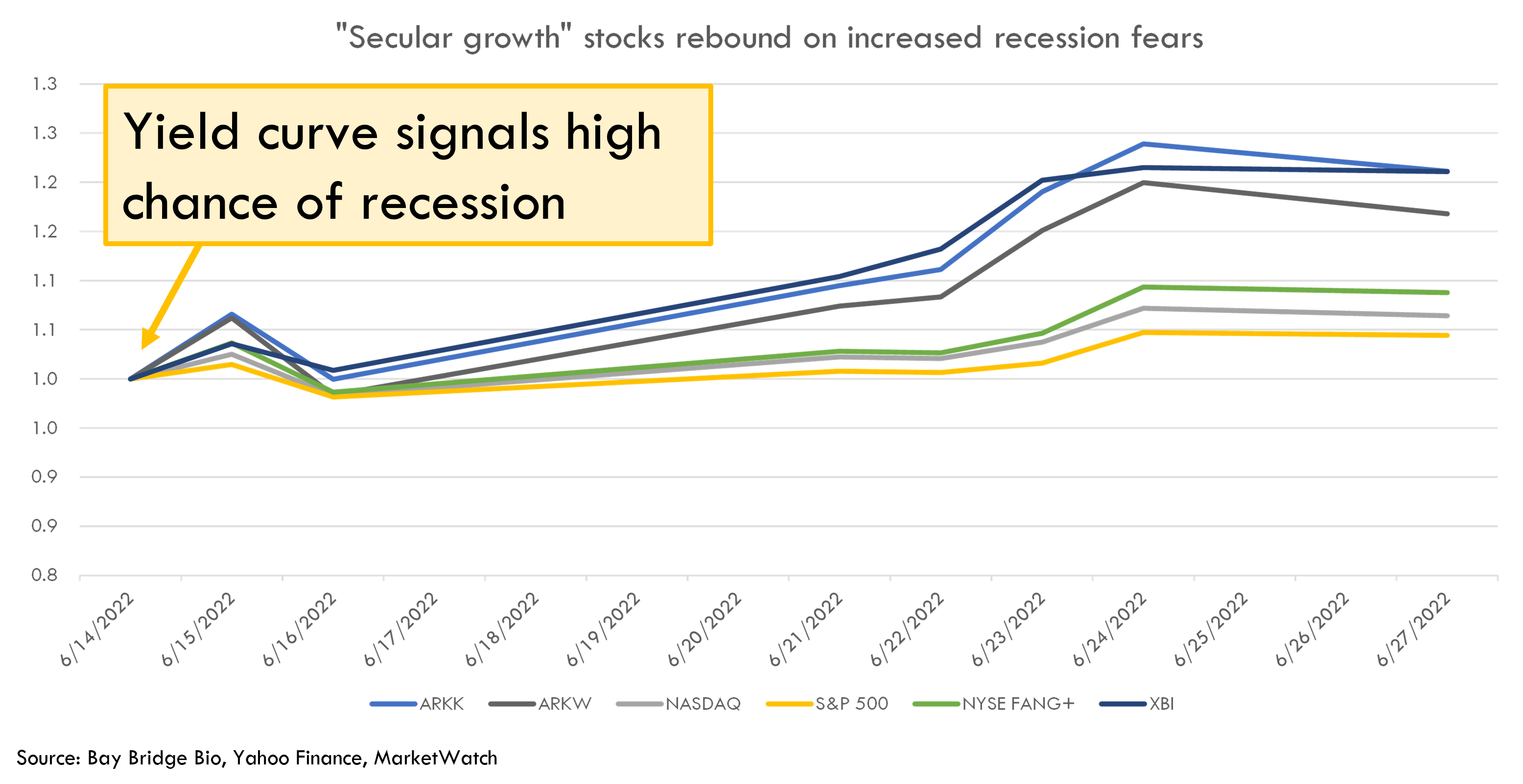 As we explained above, the reason for this shift is that investors now think that inflation is so out of control that the Fed will have to respond so aggressively that it causes a recession.

Even so, one would expect a recession would decrease stock prices. And many stocks have traded down, especially companies that sell discretionary products to consumers (the S&P Retail Select Industry Index, for example, is down 4% from prior to the most recent CPI readout, and many commodities like oil are down sharply).

But two major groups of stocks traded up in response to recession fears: defensive stocks and secular growth stocks. 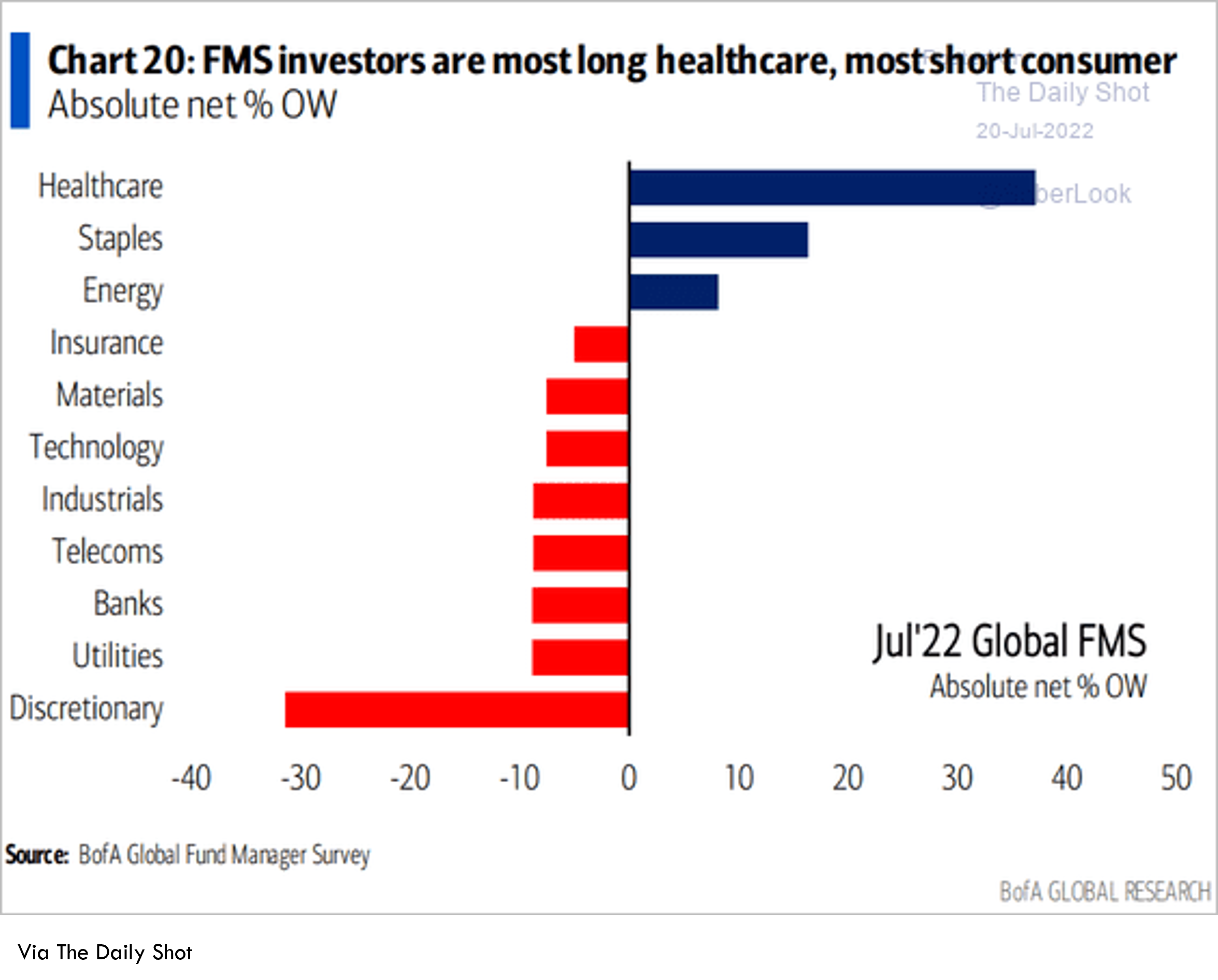 As we see in the above chart (showing results of a survey of fund managers conducted by Bank of America), investors are betting on defensive stocks like healthcare and consumer staples and shying away from recession-sensitive stocks like consumer discretionary.

Defensive stocks are those that fare relatively well in a recession. While consumers may slow their spending on discretionary items like TVs or clothes in a recession, there are certain things they will continue to pay for. Healthcare is a classic example of a defensive industry.

Secular growth stocks, on the other hand, are those that are expected to grow throughout ups and downs of economic cycles 2. This growth is driven by improvements in underlying technology trends or demographic shifts. In contrast, cyclical stocks only grow when the economy does (and shrink when it shrinks). 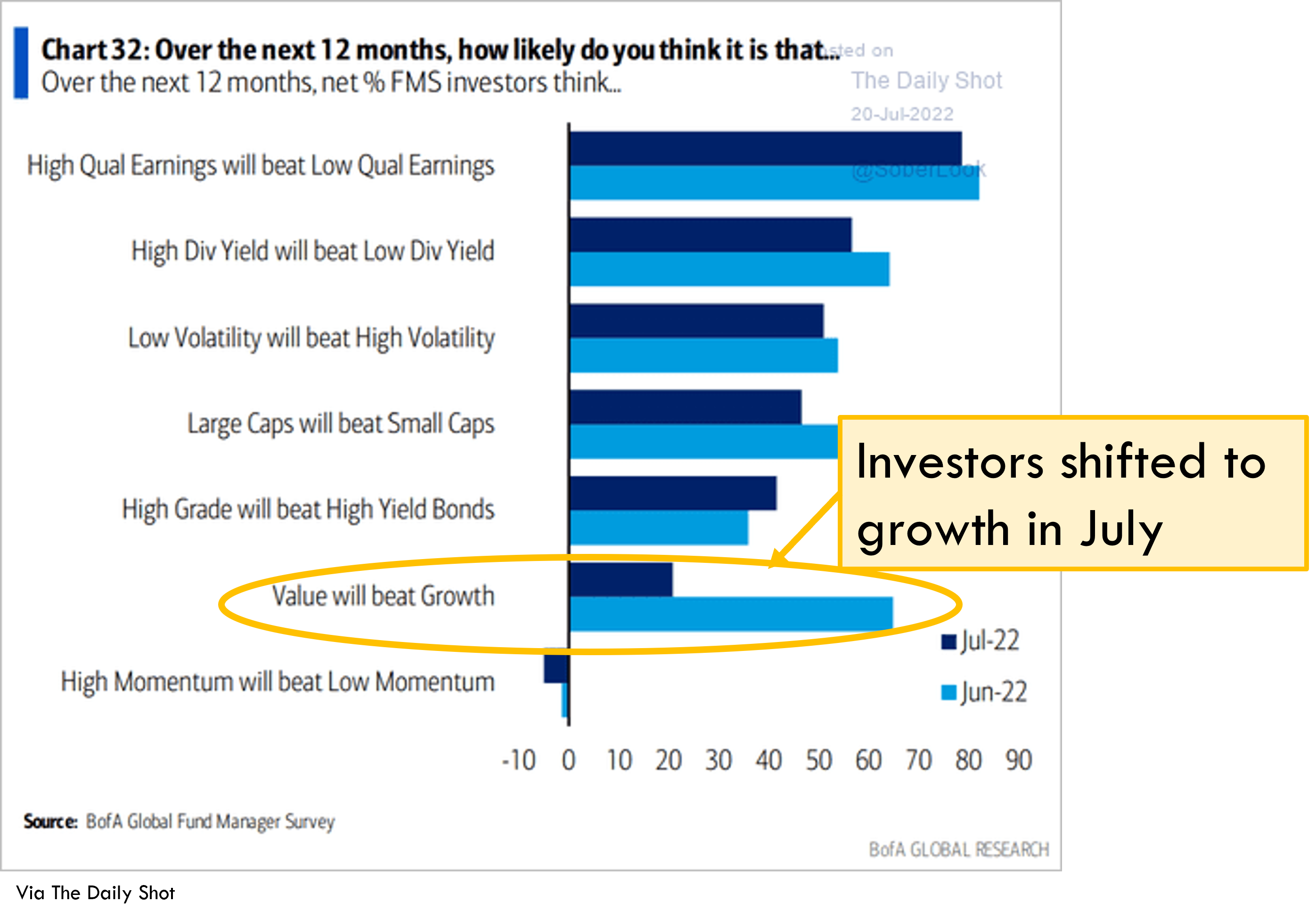 In addition to having growth potential even during a recession, growth stocks are also more sensitive to changes in interest rates. Growth stocks will have higher earnings in the future than in the present, and when interest rates are low, the value of future profits increases.

Biotech just so happens to be both a defensive and a secular growth sector, and is well positioned to weather a recession.

Or at least that's what the market thinks as of June 14-July 20 (the date of this post). Historically, stocks -- including growth stocks -- tend to fall during recessions. And development-stage biotech, while a healthcare sector, is quite different than the classic defensive healthcare stock (one reason being that dev-stage biotech has no revenue).

Find biotech stocks with potential to survive -- and thrive -- in a bear market. Screen by valuation, burn rate, runway, development stage, and more.


Some investors attribute the recent outperformance of biotech to M&A activity. The XBI certainly responded favorably to rumors of Merck buying Seagen.

In our view, M&A is still a less important factor than macroeconomic concerns. The fact that biotech's rebound coincides with recessionary signals (yield curve inversion, commodity price declines, expectations of rate cuts in 2023, etc.) and the fact that biotech rebounded in mid-June along with other risk assets and secular growth stocks (ARKK, ARKW, FAANG stocks, NASDAQ) suggests to us that recession-driven shifts into defensives and secular growth stocks are responsible for biotech's rebound.


The only certainty is volatility


While biotech is in favor at the moment, there are still significant risks -- both biotech-specific risks and macroeconomic risks. And in an uncertain economic environment like today's, fortunes can change quickly.

For example, investors appear to have reconsidered the extent to which they consider tech stocks to be secular growth stocks. During the end of June, these stocks traded down as new economic data was released suggesting that consumer spending would be lower than expected, and some of the big tech companies announced hiring slowdowns. 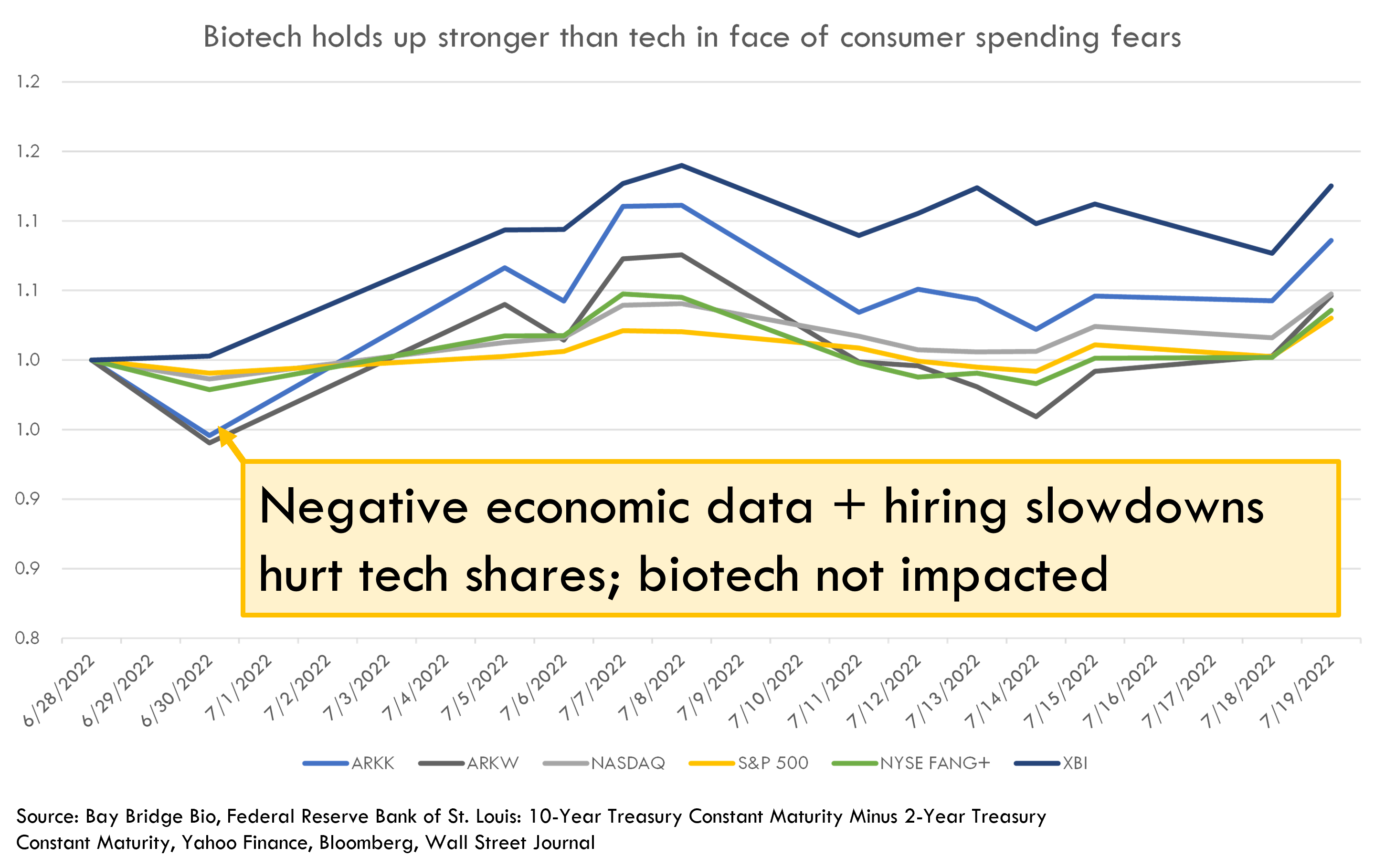 Biotech is not impacted by slowed consumer spending, so it was not hurt by these concerning economic releases. But biotech is certainly not immune to volatility. Investors will continue to analyze economic prospects and position themselves for a range of scenarios. And with recession as a ever-larger concern for investors, individual company performance will likely be more important than in the past, where low rates lifted all boats.


Does this mean that biotech has truly bottomed, or is this a bear market rally that will be followed by further declines?

While a recession-driven decrease in consumer spending is unlikely to hurt biotech stocks, biotech is vulnerable to its own idiosyncratic risks. Specifically, drug pricing reform is always a concern, as are clinical data releases and other binary events. If biotech is still fundamentally overvalued, we'd expect the risk/reward to biotech stocks from clinical data to be skewed to the downside (while if biotech is undervalued, the opposite would be true). And drug pricing reform is resurfacing as a concern leading up to midterm elections in the US.

But the biggest risks to biotech in our view are still macro: higher than expected inflation, deeper than expected recession, and / or a Federal Reserve that continues to hike through a recession.

The latter is not expected to occur, as recessions are typically accompanied by declining demand (which lowers inflation) and rising unemployment (part of the Fed's dual mandate, in addition to controlling inflation, is to maximize employment). But this particular recession may break the historical pattern.

Unemployment is still near all-time lows and the job market is very strong. The economy may face a unique recession, with low growth but high employment. In such a nearly unprecedented scenario, it isn't unreasonable to think the Fed would continue to prioritize the fight against inflation vs. stimulating the economy to increase employment. After all, the Fed doesn't have a mandate to stop recessions unless they lead to increasing unemployment.

Further, a recession may not cool inflation. The Fed, and many economists, have repeatedly asserted that monetary policy (which works by increasing or decreasing demand) is not the right tool to fight the current supply-driven inflation (caused by the war in Ukraine and COVID-related supply chain issues). If this is the case (and is not just rhetoric), then a Fed-induced recession may not lower inflation.

But history suggests that a recession will lead to higher unemployment and lower demand, and we are already seeing early signs of this. In this case, the market's view that the Fed will cut rates in 2023 to get out of recession seems reasonable.

What does history tell us about how biotech fares in recessions and market crashes?


Biotech in other market crashes

There were several dramatic bear market rallies during the dotcom bust. The NASDAQ declined ~80% from peak to trough during the dotcom bust, but the XBI was only down ~60% from Feb. 2021 peak to May / June 2022 trough. There is evidence suggesting that biotech in 2021 was even frothier than in 2000, so a decline of 80%+ peak-to-trough isn’t out of the question.

We believe that the dotcom bubble is a more relevant “comp” for biotech today than the Great Recession. Biotech in 2000, like in 2020-2021, was marked by a very high level of risk tolerance and speculation, with very active venture and IPO markets and high valuations for high-risk preclinical platform companies.

On the other hand, biotech was very risk-off from 2006-2012. There were no IPOs for nearly two years from 2007-2009, and most IPOs around this time were of mature companies with approved products or in late-stage trials. There was very little investment in science-heavy platforms, novel targets, or preclinical candidates, in stark contrast to biotech from 2018-2021.

Biotech was perhaps the most unloved sector of the market from 2003-2012 (apart from mortgage-backed securities and CDOs post-2007). Biotech from 2007-2012 was truly undervalued, with many derisked, differentiated assets priced at historically low levels. In this light, it makes sense that biotech performed better than the S&P 500. Today’s biotech market – even after the biotech market crash – is not as attractively valued as it was during the Great Recession.

It may be wise for biotech companies to take advantage of this rebound to raise capital on favorable terms if possible. Holding out for a return to 2021 valuations may work, but the risk of being wrong is significant.

2 In practice, it can be very difficult to tell whether a company is growing due to some underlying trend or because it has a better product that is taking share from competitors in a cyclical market. For example, FAANG stocks are considered secular growth, but it is reasonable to expect them to act like cyclicals with declining revenue in a recession (iPhones are consumer discretionary items, Meta and Google rely on advertising revenue which is cyclical, Amazon is a retailer, Netflix is consumer discretionary).