2020 is shaping up to be a great year for exits as well. The biopharma IPO market is at record levels, with with 33 big IPOs of VC-backed biopharma startups on NASDAQ raising a over $5.8B through mid-September. The M&A market has also shown signs of life, notably with Gilead's $21B acquisition of Immunomedics (although Immunomedics doesn't count as a startup).

A quick note -- in this post, I use "biotech" and "biopharma" interchangeably to mean companies developing FDA-regulated prescription medicines -- no devices, diagnostics, etc. Biopharma is by far the biggest subsector of healthcare VC. 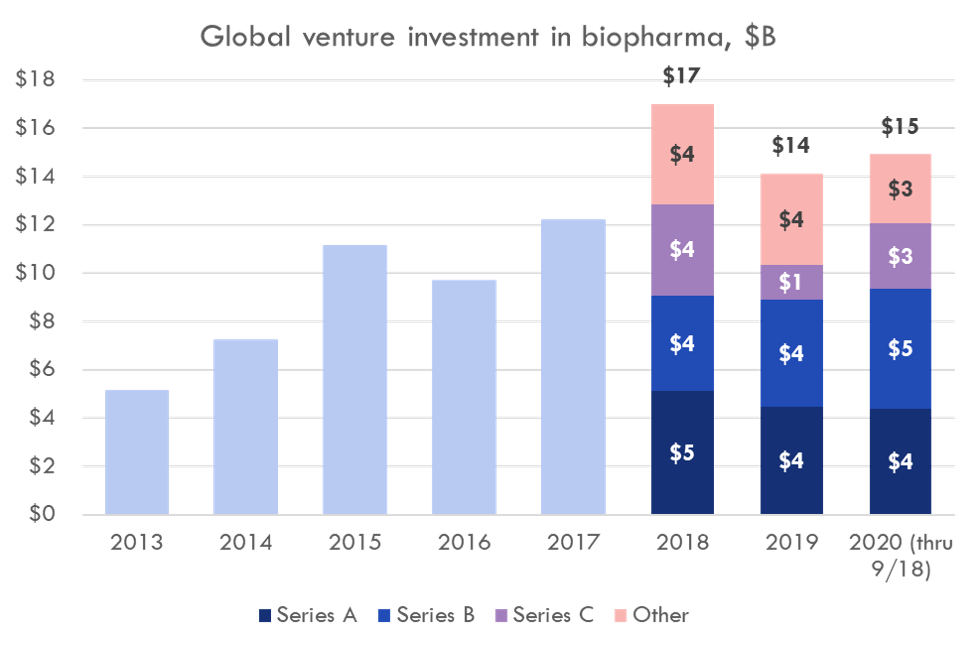 This post will describe the top biotech venture capital firms from 2018 to today:

Perhaps most encouragingly, the biggest investments and exits were for companies with life-saving medicines and transformational technology. The industry now seems to value true innovation more than incremental advances and me-too drugs. If you're interested in seeing what kind of startups investors are funding, checkout our searchable list of recently funded biotech startups.


The biopharma venture landscape hasn't changed too much from 2019, with one exception: crossover investors are becoming even more active, at even earlier stages. Crossover investing started to pick up around 2012 when hedge funds and other public equity funds started investing in private companies in an effort to boost returns. As the IPO market has become more accessible to earlier stage companies, and as later-stage VC has become more crowded, crossover investors have moved earlier.

Crossover investors are largely picking up where Chinese investors left off. Chinese investors were some of the most active funders of biotech startups in the world in 2018, but that ground to a near halt in 2019 due to US-China geopolitical tensions. 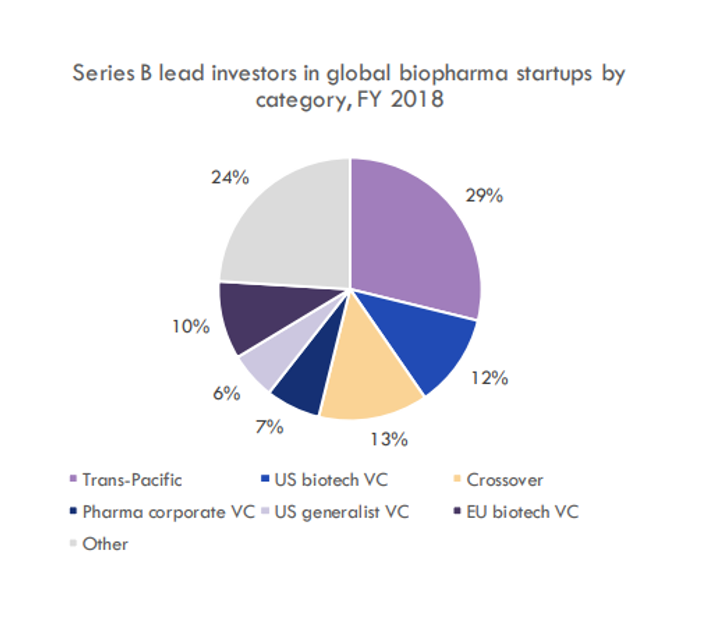 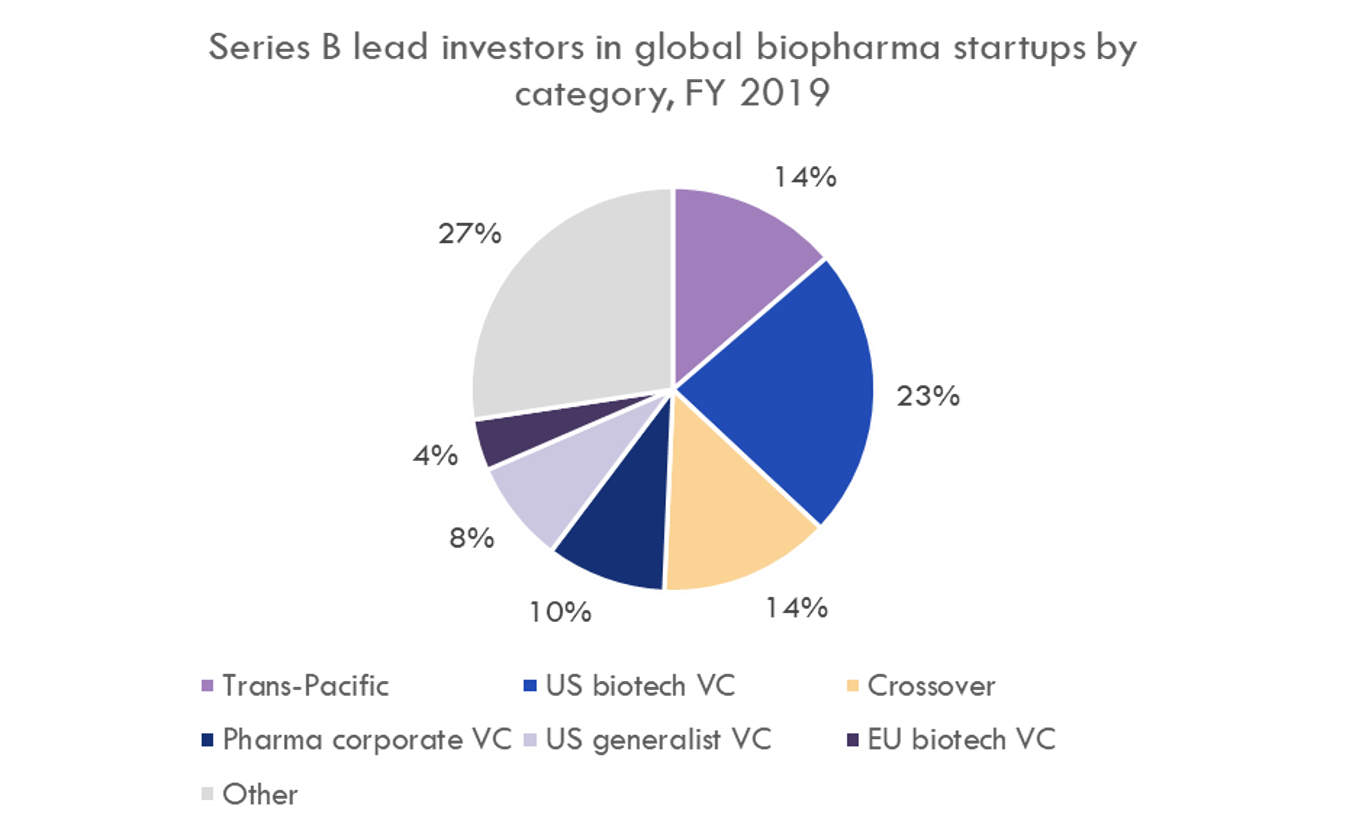 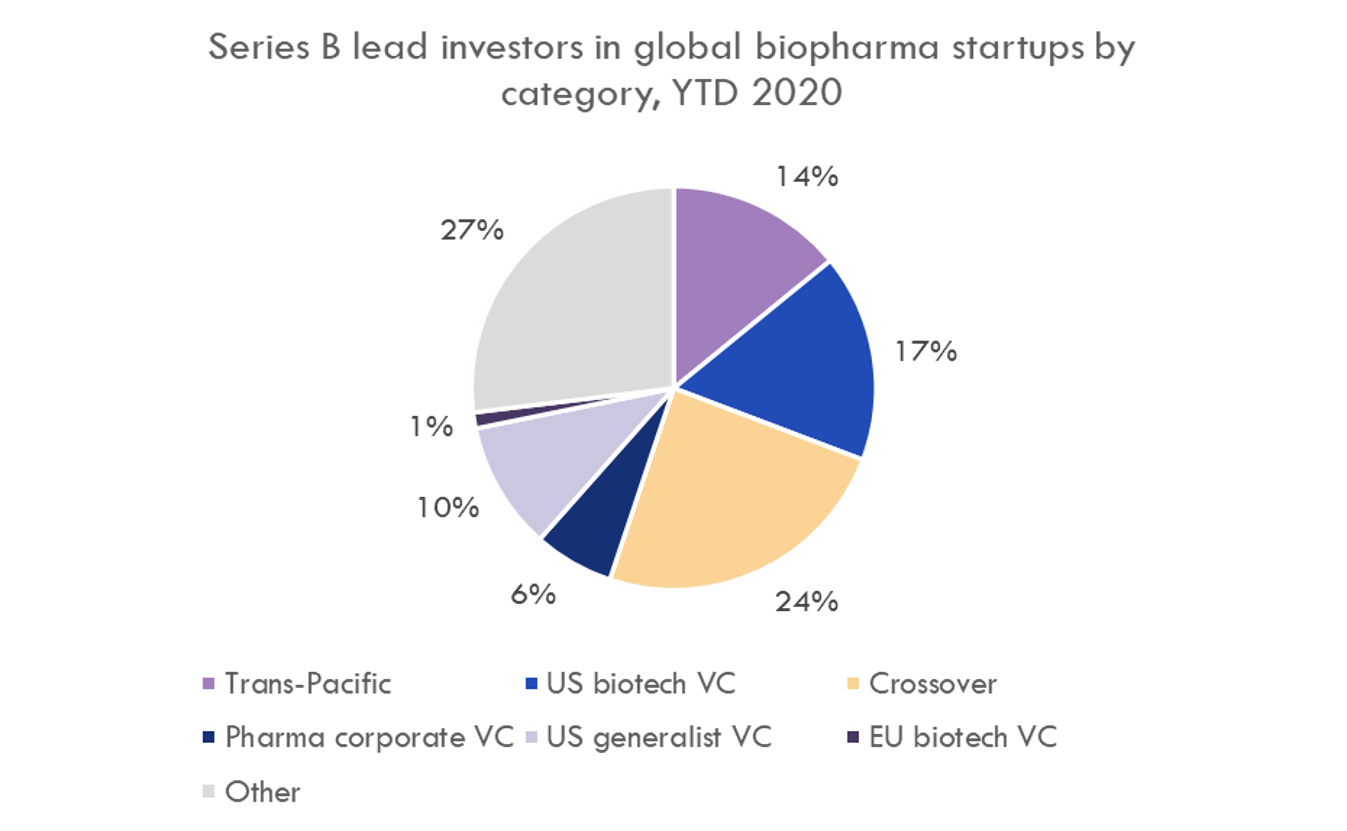 Despite the mid- and late-stage venture markets becoming increasingly crowded, early stage funding is still dominated by traditional biotech VCs. The biggest shift at the Series A stage in 2020 has been crossover investors taking some Series A share from traditional US-based biotech VCs. Crossover investors led 8% of A rounds in the first three quarters of 2020, compared to 3-4% in 2018 and 2019. 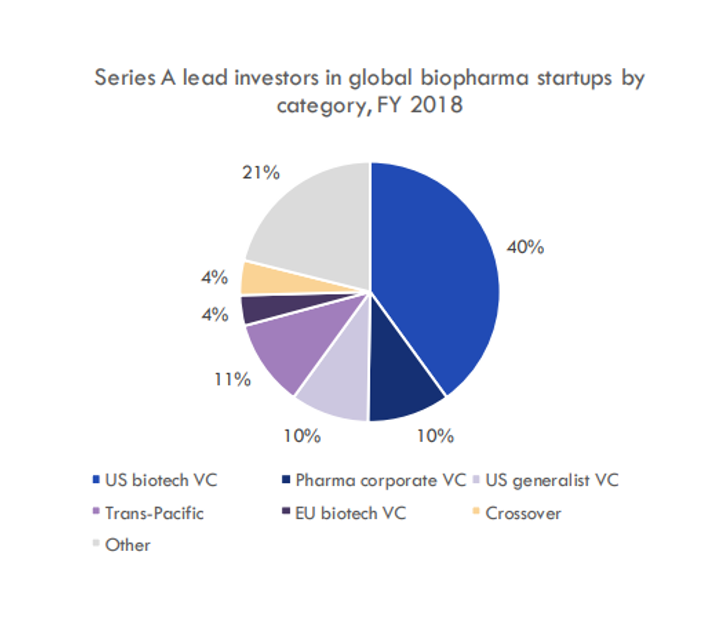 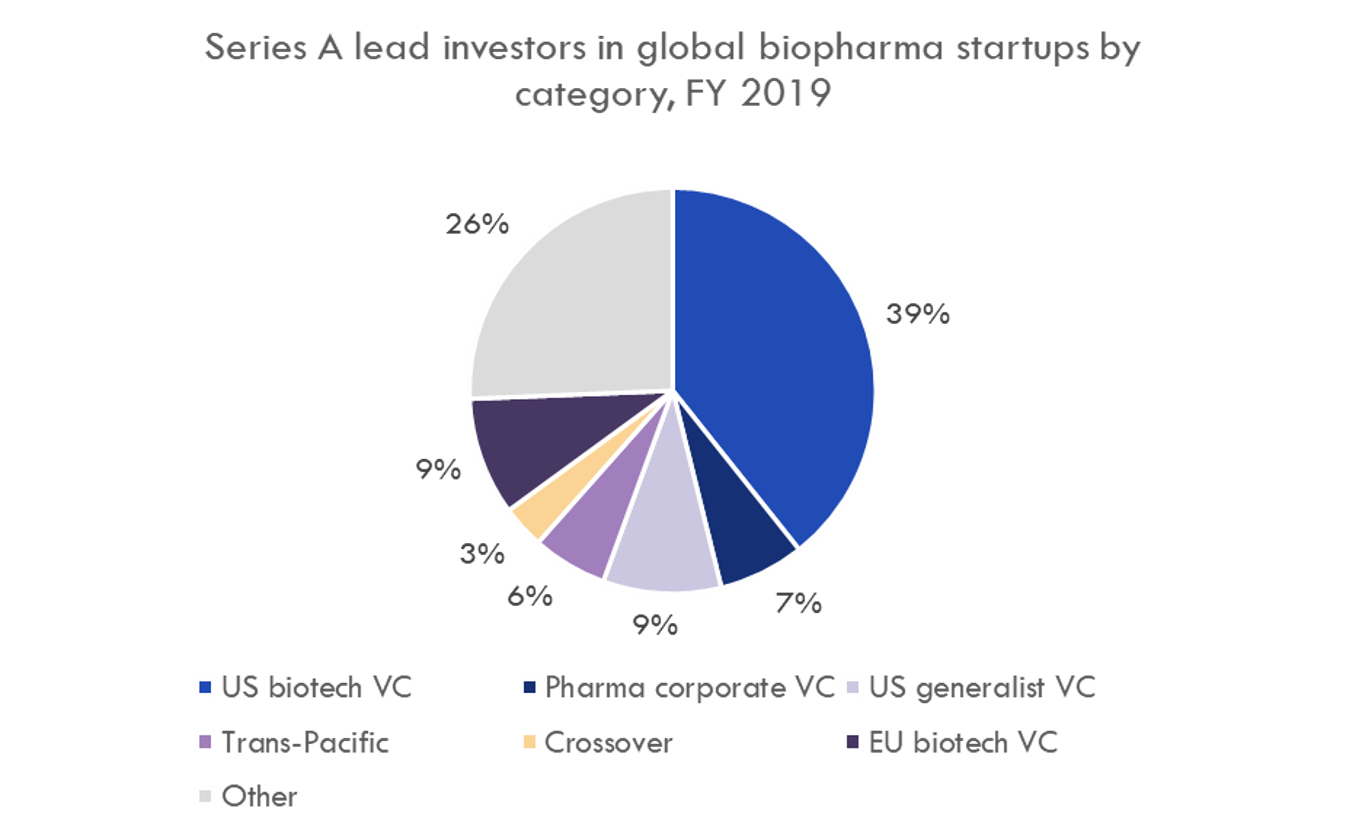 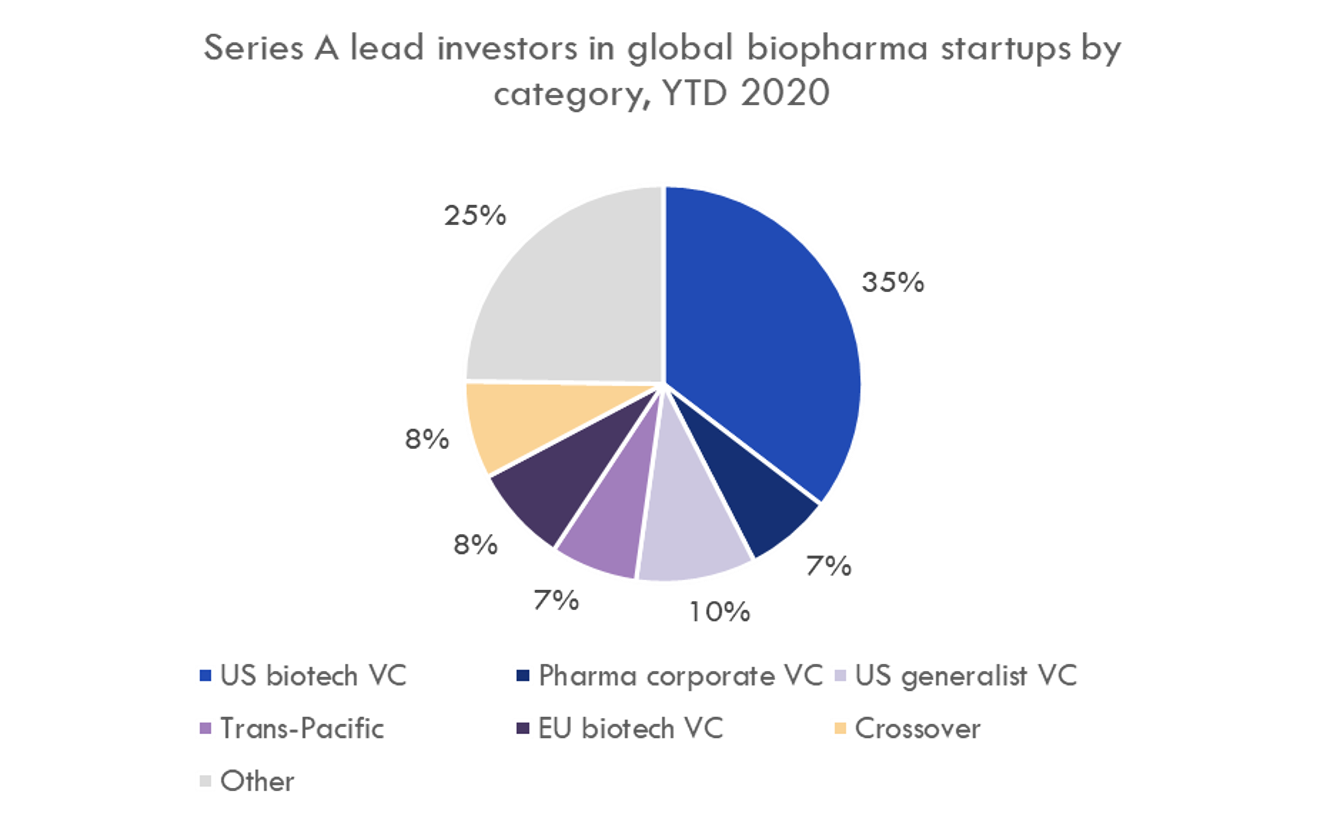 The top Series A investors are also company creators and many of their A investments go to companies they build in-house. They then syndicate out to crossover investors (public equity investors who invest selectively in private markets, often in the last private round), Chinese investors, and corporate VCs.

While the most active Series A VCs have shuffled around a bit since 2018, there hasn't been too much change in terms of who is most active: Atlas, Versant, ARCH, Sofinnova, Canaan, The Column Group, Orbimed et al. RA Capital, traditionally a crossover investor, has made a big play in Series A investing in 2020 (and venture investing in general), which isn't surprising given the strength of the IPO market.

Who were the most active lead Series A investors in 2018 through September 2020? 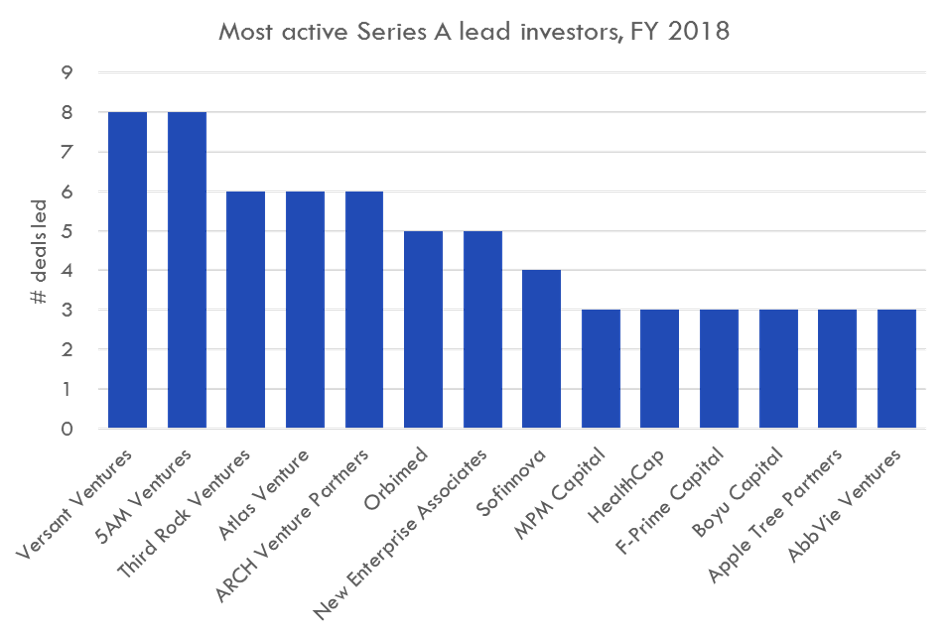 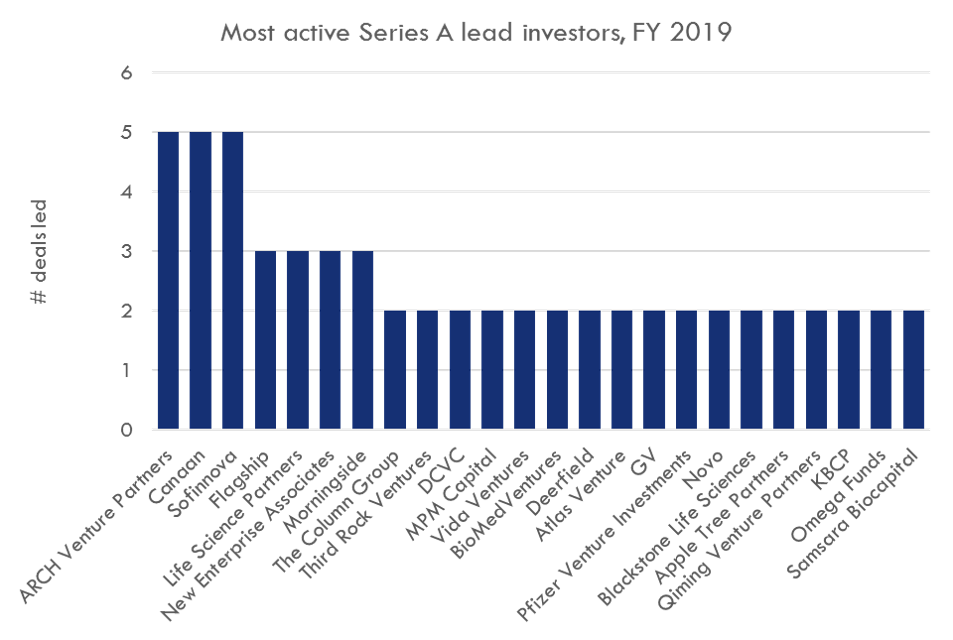 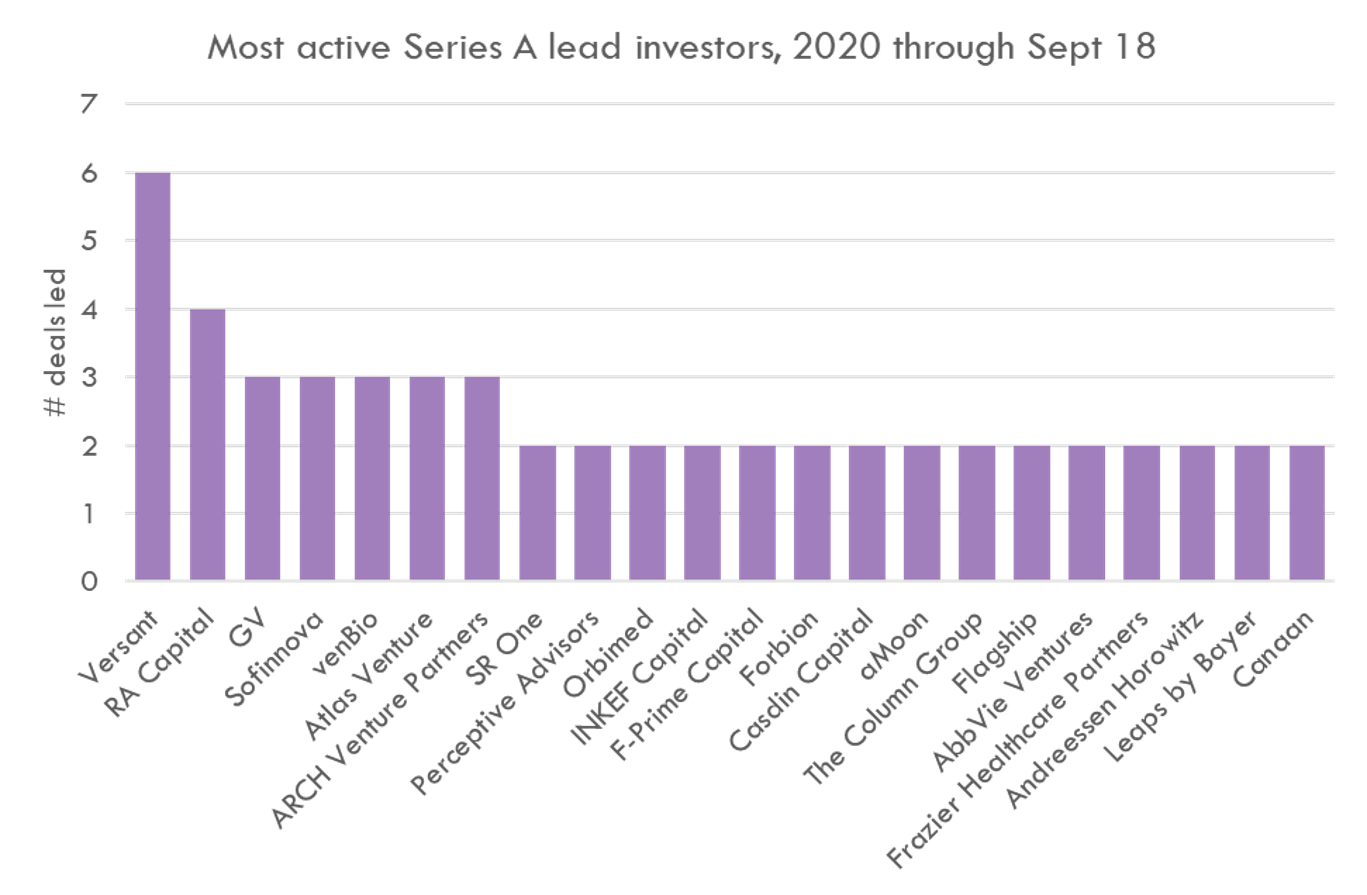 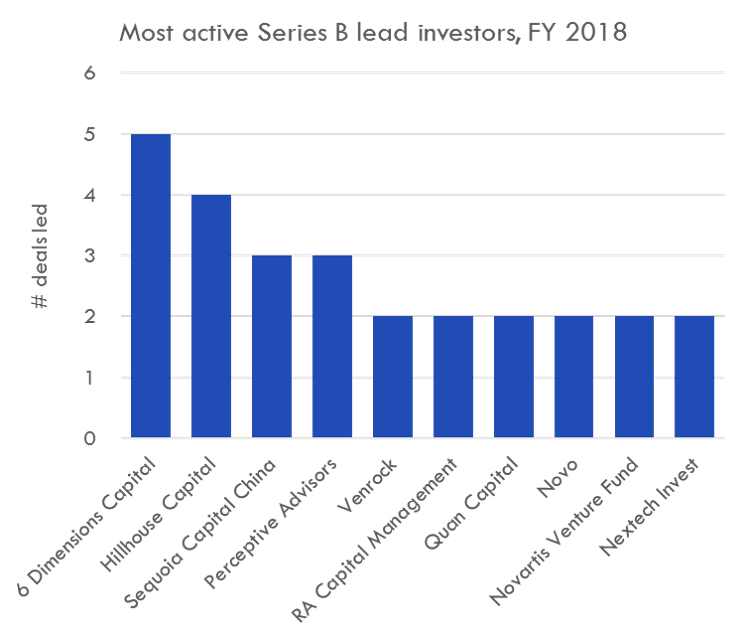 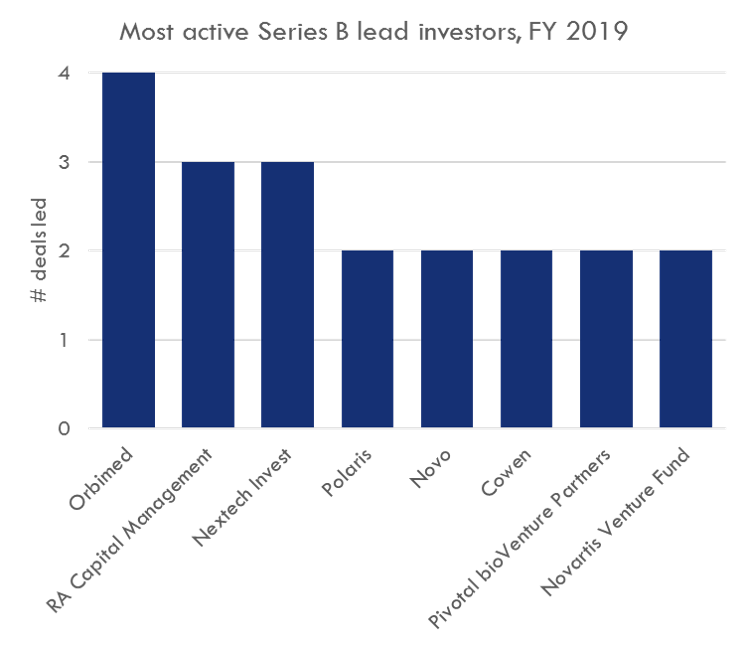 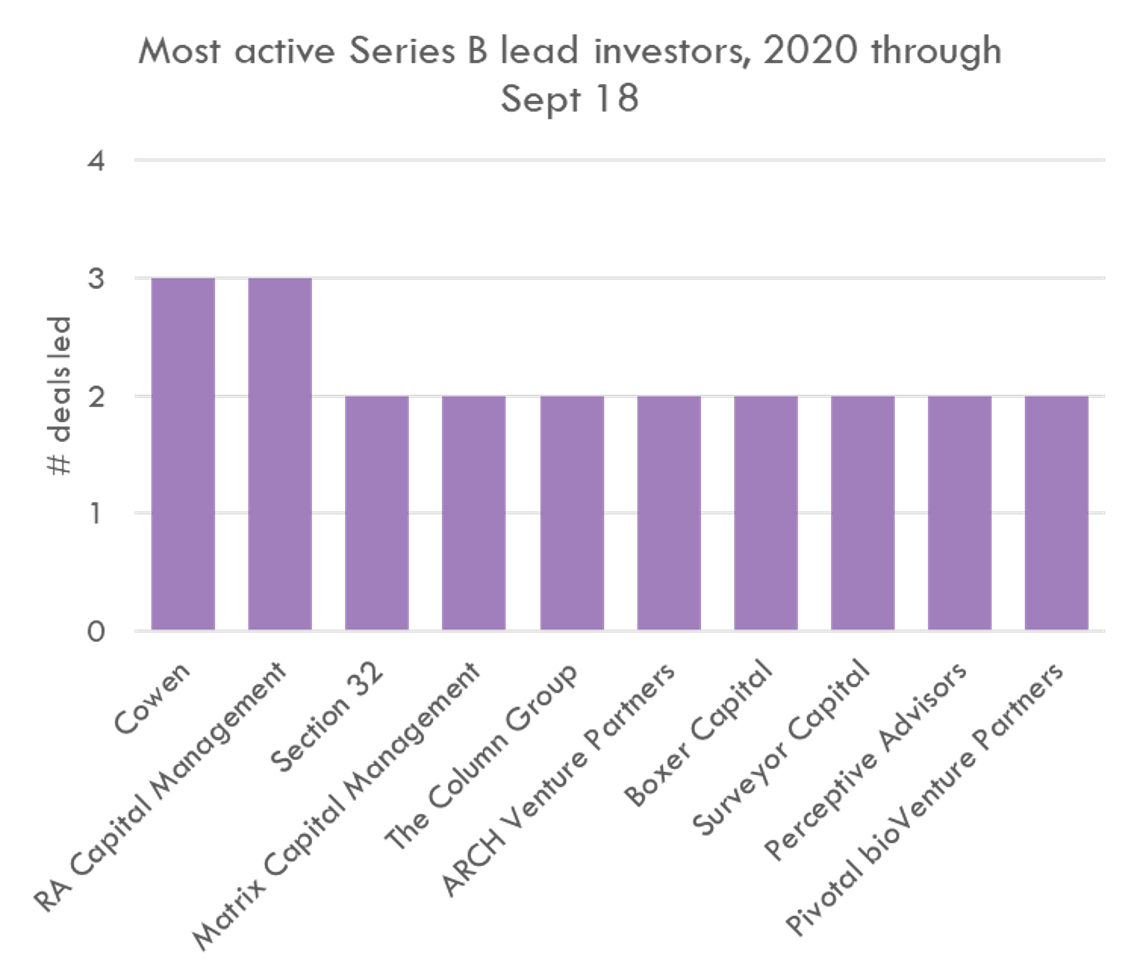 
In biotech these days, exit is often through IPO. Here are the VCs who made the most through IPO exits in 2018 and 1H2019 (we're in the process of updating this, check back in October for an updated list):

This is calculated using data from publicly available SEC filings, which disclose the price per share for venture investments, pre-IPO stock splits, shares held by major investors (with 5% or greater ownership), and in many cases the amount that major investors invested in each private round. This data is incomplete in that it only captures investors who own 5% or more of a company's shares, so smaller investors aren't captured. The amount of venture capital invested for each investor is not always disclosed, and in some cases the shares invested in private rounds do not sum to the total shares owned by the investor at IPO. In these cases the amount invested per investor is not meaningful, or "N/M".

The biotech IPO market has continued to be active in 2019. To learn more about the kinds of companies going public, and what valuations these companies commanded as private companies, check out this post. I also did a writeup on the returns that venture capital firms have generated from their investments in startups that went public. To stay updated on IPOs through 2020, check out this table of recent IPOs.

M&A exits were less common than IPO exits. The total amount of M&A was roughly steady from 2018 to 2019. The biggest VC-backed biopharma buyouts in 2019 were:

The two biggest exits in 2018 were Celgene's acquisition of Juno for $11B, and Novartis' acquisition of AveXis for $8.7B. Both companies were public at time of exit, and both raised their Series A rounds less than five years before exit. The major investors in AveXis were Deerfield, Roche Venture Fund, and Paul Manning (an angel investor). The major investors in Juno were ARCH Venture Partners, Venrock, the Alaska Permanent Fund (not really a VC) and Bezos Expeditions.

To stay updated on biopharma startup funding and exit trends through 2020, check out our free startup dashboard for summary info updated on a regular basis.