For potentially the first time ever, in 2021 more money was invested in biotech startups and IPOs than was returned to the ecosystem through acquisitions of startups.

What does that mean for biotech markets, which are down 50%+ since their 2021 peak? Because M&A hasn't kept pace with the massive increase in startup funding, only a sizeable increase in M&A volume would catalyze a big market rebound. However, M&A can certainly provide a floor to stabilize the market.

The good news is that big pharma has never had as much dry powder as it does today, and there have never been so many innovative startups. If there was ever a time to go on a buying spree, it is now.

This post explores potential impact of M&A on the biotech market from two angles: the gap between startup funding and startup M&A, and M&A activity after other biotech market crashes.


In November 2002, the Dow Jones Biotech Index was down 60% from its dotcom-boom peak (for comparison, the XBI is down 55% from its 2021 peak as of May 4, 2022). Many companies were trading below cash. Investors expected a flurry of M&A to revive the sector, but this never occurred. Companies didn't want to admit defeat and sell for a discount to the bubble-level prices, and many held out hope that the market would recover.

While companies thought they were undervalued, potential acquirors thought acquisition targets were overvalued -- even with the market down over 60%. Art Levinson, then-CEO of Genentech (and current Chairman of the Board at Apple) said that even after the dotcom bust, "it’s still not clear that biotech stocks are cheap". This sentiment was recently echoed by Severin Schwan, the current CEO of Roche (Art Levinson sold Genentech to Roche in 2009): "even though valuations [have] come down, they're still at a high level". Many other big pharma CEOs feel the same way.

Overall, the parallels between the dotcom bust and today are that 1) big pharma viewed bubble-level valuations as far too high and 2) big pharma is willing to be patient and wait until seller expectations adjust to the new, more conservative reality. On a positive note, some big pharma CEOs such as Paul Hudson at Sanofi say that they are willing to pay up for the right asset. Big pharma wants assets with first-in-class or best-in-class potential demonstrated by rigorous science. Companies working on such products can still command significant value. 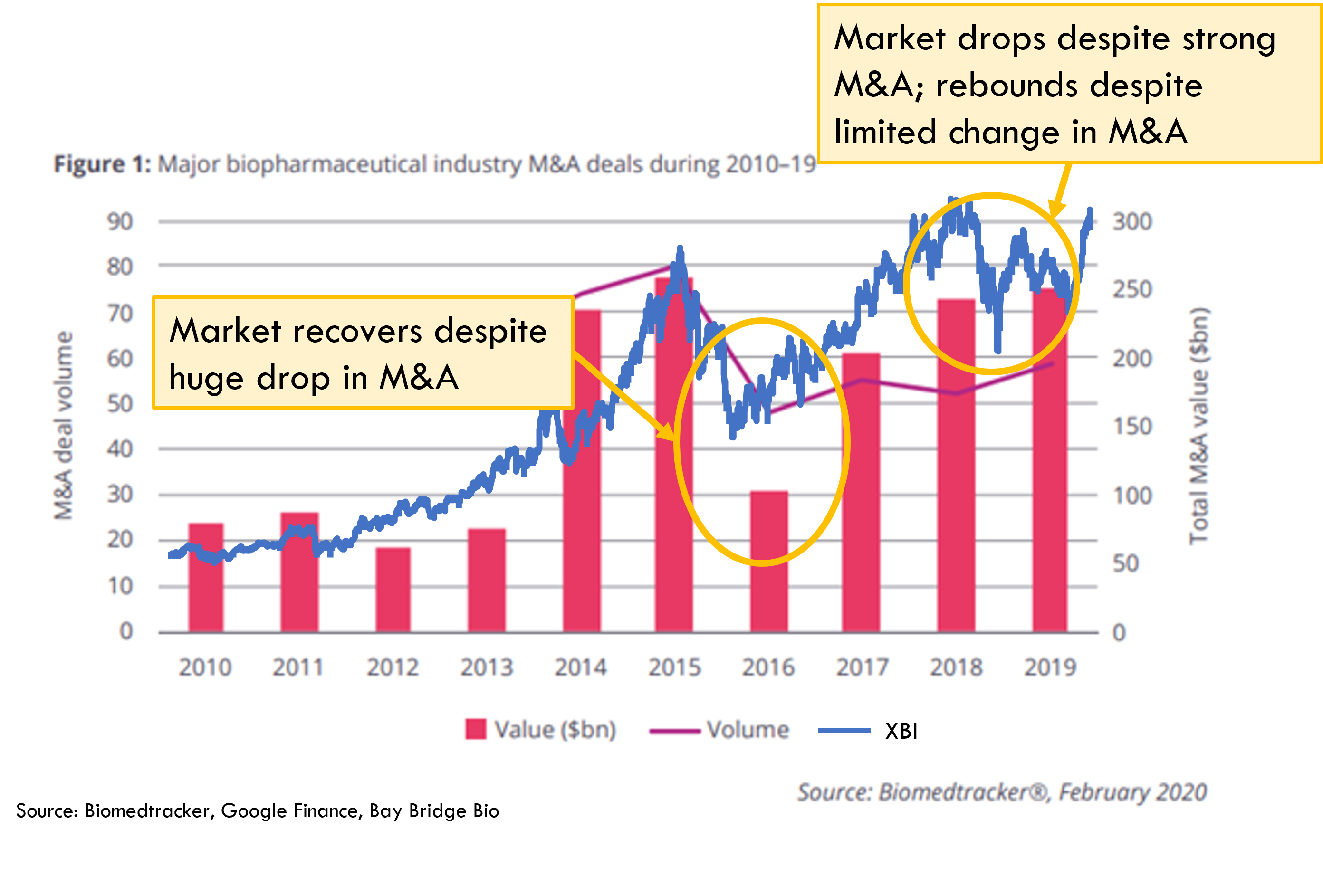 What about more recent crashes?

In 2015, biotech markets suffered their biggest crash since the dotcom bubble popped. But starting in March 2016, markets quickly rebounded.

A huge increase in big pharma M&A since 2013 was a big reason that the bubble grew in the first place. It is reasonable, then, to guess that a surge in M&A activity catalyzed the rebound.

There was another (though smaller) crash in 2018, as recession fears caused investors to shed risky assets like biotech. The XBI dropped despite historically high levels of M&A and a roughly 20% increase in M&A volume compared to the prior year. The market recovered quickly, though M&A volume didn't change much. The recovery again was driven by Fed policy.

That isn't to say that M&A doesn't impact the market. Big pharma M&A in the wake of the patent cliff was a huge tailwind for biotech investors. And big buyouts of next-gen platform biotechs like Kite, Juno, and AveXis catalyzed increased investment in biotech startups with novel, high potential science.

Even acquisitions of mature companies (as opposed to startups) support the startup ecosystem: in the wake of the recent crash, many public equity investors don't have much dry powder to invest in biotech. Big M&A deals will recycle cash to these investors to deploy into many of the now bargain-priced startups that went public over the last few years.

M&A will certainly help the market and reward companies with the best products. But because M&A hasn't kept pace with funding, it likely won't catalyze a broad market rebound.


The total dollar value of acquisitions of biotech startups has been steady around $40B / year (including biobucks) since 2018, while venture funding and IPO investments have skyrocketed.

In 2021, investment in biotech startups outpaced dollars spent acquiring startups. According to a recent note by Barclays, this was the first time this has ever happened.

The takeaway is that unless pharma dramatically increases the pace of its M&A, there isn't even enough M&A volume to return VC and IPO investors' money -- much less provide an attractive return.

While an increase in M&A will certainly help the sector, it won't replace the big generalist investors who fell in love with biotech during the Fed's easy money regime. These investors had effectively priced big pharma out of the market over the last few years. As these investors step back, big pharma has the chance to step in, but not until the market shifts from a seller's market to a buyer's market.

In other words, M&A provides a floor to the market, but monetary policy provides the ceiling.

On a positive note, big pharma companies have more cash than ever to do deals, and they will pay up for the right company. Market crashes are tough on all companies, but companies with the best products and best science emerge stronger. Pharmacyclics had an enterprise value of -$50M at one point after the dotcom bust, and was later acquired for $21B after developing Imbruvica, a first-in-class BTK inhibitor to treat liquid tumors.

Money may be tight in the future. But the rewards for deploying that money the right way -- into rigorous science and the highest-quality products -- are still massive.