The next generation of biotech VCs


After over a decade of dominating the biotech venture landscape, established biotech VCs like Atlas, Versant, Third Rock and 5AM Ventures are ceding share to upstart VCs. 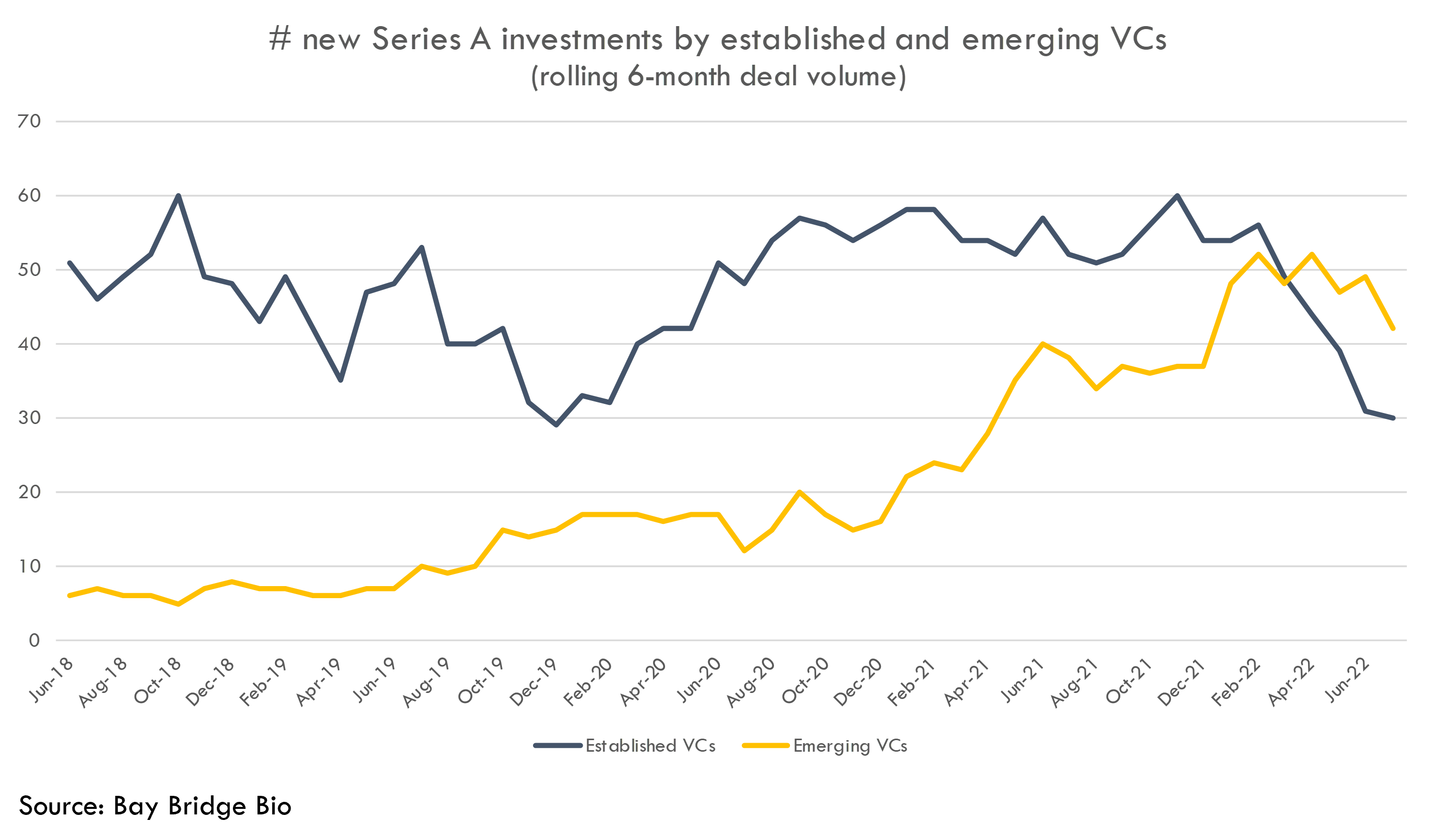 Traditional biotech VCs profited from a well-oiled IPO machine over the last decade. But with markets in turmoil and the IPO market halted, these VCs have slowed their activity.

A new class of biotech VCs is picking up where they left off. These VCs ramped up their activity during COVID and, unlike their established biotech VC counterparts, are not slowing down.

Are these investors poised to lead the industry into the next boom, or are they simply the last ones to leave last year’s party? Only time will tell.

Before getting into the analysis, a caveat: statistics are based on disclosed funding announcements. Not all deals are publicized, and there can be a delay from when a deal is closed to when the press release hits the wires.


Who are the upstart VCs?


There are three categories of investors who have remained active investors in Series A deals in the aftermath of the post-COVID crash: techbio VCs, crossover VCs, and corporate VCs.


Many of these investors are not “emerging” in the sense that they are new to biotech investing. What is new is their increased activity at the Series A stage. Many of these "emerging" VCs have been investing in biotech for years or even decades, but they have historically focused their investments at the seed stage (like many techbio VCs) or later stages (like crossover investors), or they have invested sporadically in Series A deals, but not as frequently as the "established" Series A players. 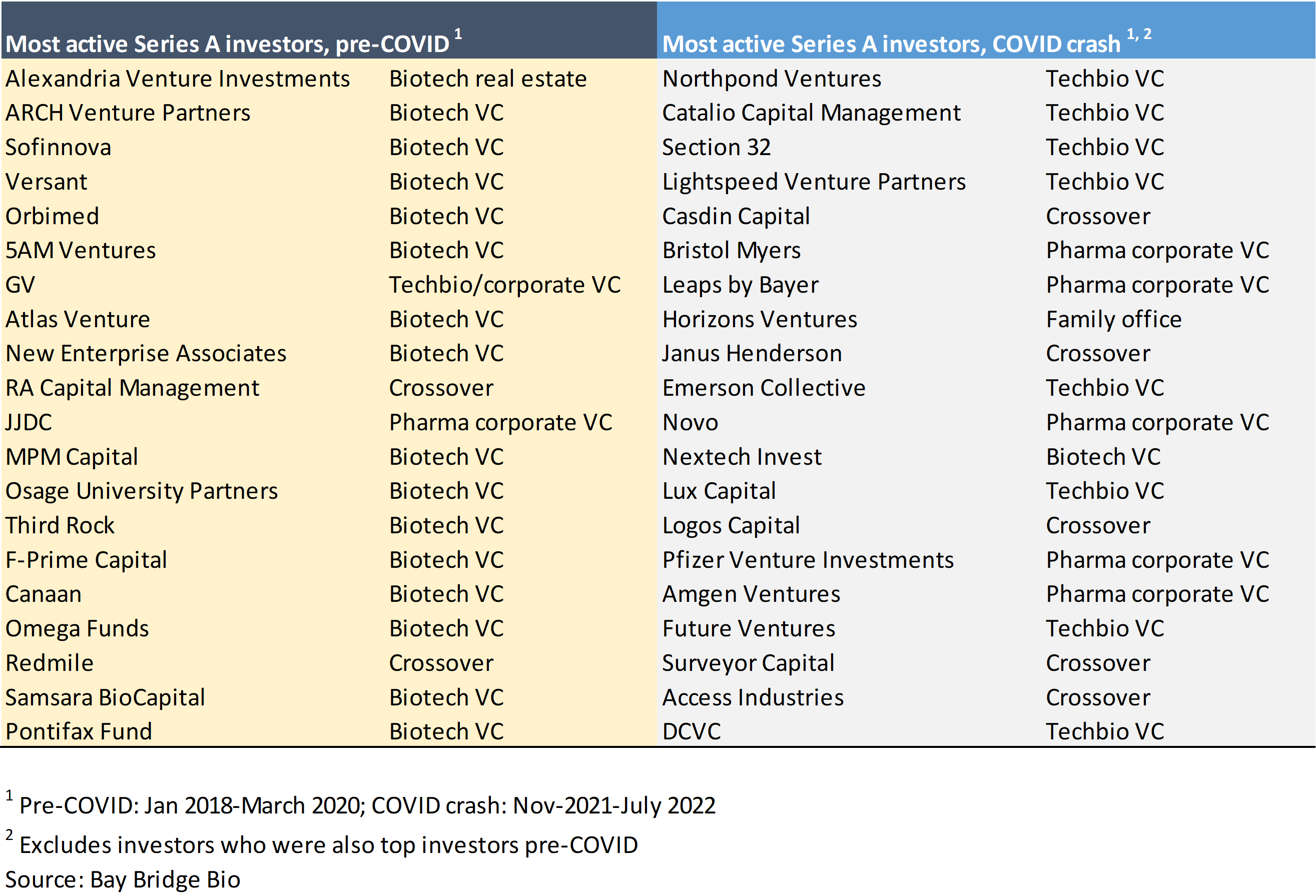 Series A investing is a tough job


Series A investors have become the “tastemakers” of the biotech startup world. They choose the companies that end up getting later-stage funding and that ultimately have a shot at getting drugs approved.

While upstream and downstream funding markets have seen considerable shakeups in recent years due to heightened competition, the Series A market has thus far resisted disruption. A small number of funds have dominated the Series A market for over a decade. The concentration of capital -- and influence on downstream investors -- among a few firms means that if a company doesn’t fit the tastes of this small club of investors, it won’t get funded – even if it has real potential.

The emerging VCs that can adapt their investing strategies to the unique area of Series A investing will have a significant advantage over investors who are slower to adapt to a very different part of the market. But execution risk is not the only risk these investors face. They are also entering the most challenging downstream funding market in years: 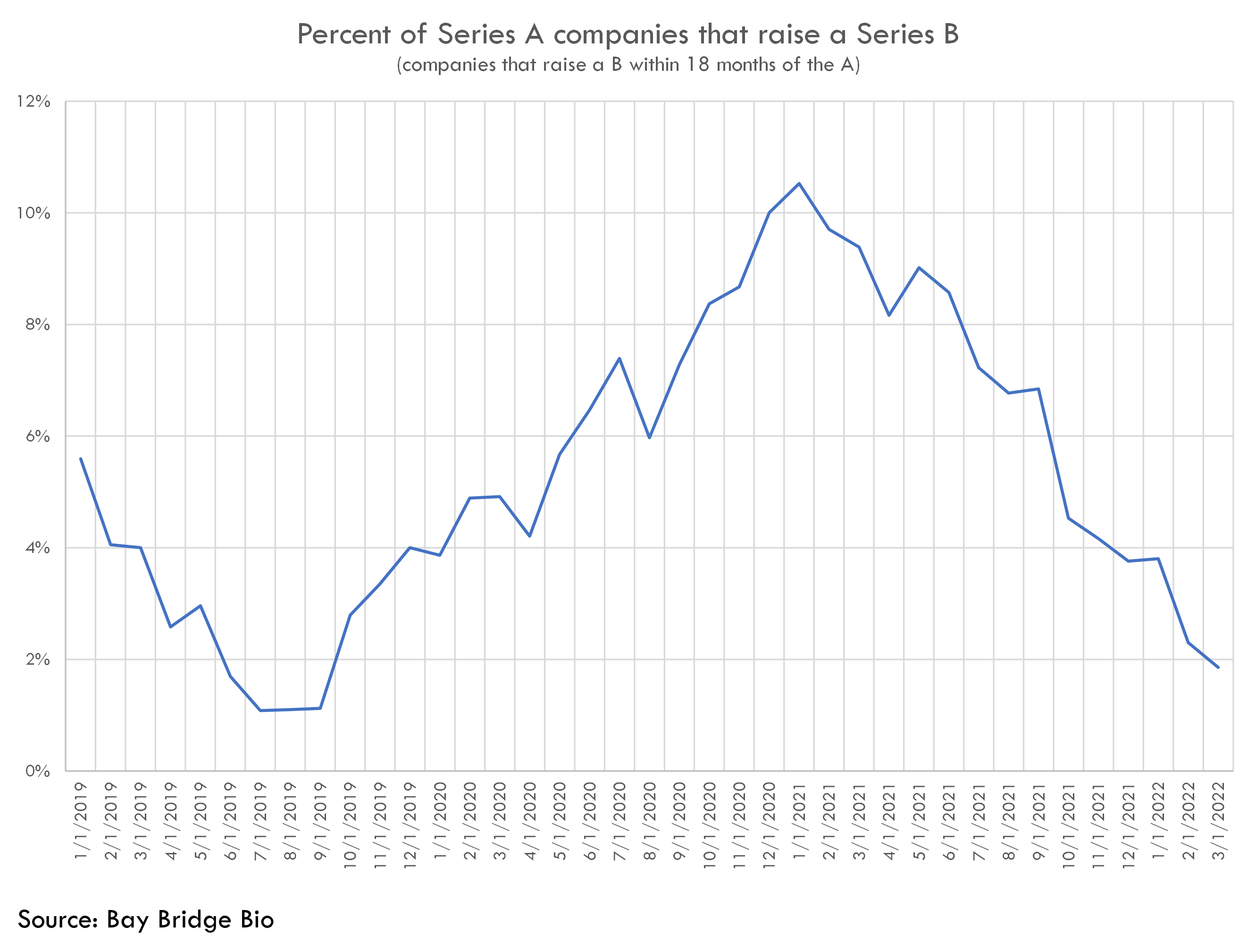 The above chart shows the monthly percentage of Series A companies that go on to raise a Series B within 18 months. This percentage was around 5% before recession fears in 2019 slowed the IPO and crossover markets, then ramped up to over 10% during the COVID boom, and has now dropped to a nearly three-year low.

This could be a challenge, or an opportunity, for these funds. On the one hand, a shallow Series B market makes it harder for Series A investors' portfolio companies to raise on good terms. On the other hand, if these investors want to deploy more capital in downstream rounds, they will have the opportunity to do so at attractive prices.

Funds that have true conviction in their investments and the capacity to put capital to work in later-stage rounds will benefit from a depressed Series B market. Funds that are less able to invest in downstream rounds will be in a tougher position. And for momentum-oriented funds that focus on getting high paper returns through fast portfolio markups to support rapid fundraising, challenging downstream markets will force a shift in strategy.

Which of these emerging Series A VCs are best positioned to consolidate their new role as leading Series A investors?


After the dotcom bust, tech investors abandoned biotech. But starting in the mid 2010s, software investors began testing the waters in biotech.

What changed? Software VCs hypothesized that new data science techniques could be applied to biology, and that a new class of lasting companies could be built upon this new tech. They also saw the massive returns being generated in biotech and, amidst increasing competition in the tech VC world, wanted in on the action.

These techbio funds looked to carve out their own corner of the biotech VC world. They focused on two areas neglected by established VCs: 1) young scientist-founders and 2) computational platforms vs. traditional drug discovery.

They also imported the more founder-friendly investment terms of the software world. In traditional biotech, many companies would be seeded and incubated in house by venture funds. These funds would lead Series A rounds in successfully incubated companies, ending up with 50% or more of the company after the A. Techbio VCs invested smaller amounts than traditional biotech funds, and invested at higher valuations.

Another positive change brought by these techbio VCs was the establishment of a robust seed and pre-seed funding ecosystem. Before the entrance of techbio VCs, there was virtually no way to raise initial capital for a biotech startup unless you were part of, or close with, one of the main VCs. There were a few active family offices and angel investors, but the terms they offered were generally unfavorable, and they invested very inconsistently. The seed market in biotech frankly was terrible.

That changed when techbio VCs entered the space. Until COVID, techbio VCs mostly focused on seed investing, with a handful of funds writing Series A checks (often coinvesting with established biotech VCs). As these investors gained experience (and tweeted about it), more and more investors entered the seed space. By 2021, the preseed and seed ecosystem in biotech had exploded and was arguably just as robust (if not more so) than many parts of the tech startup world.

The establishment of a true, founder friendly seed funding ecosystem, and a focus on a different phenotype of founder, have been uniformly positive developments that these VCs can be credited with. The jury is still out on the “software is eating biotech” thesis, but there are certainly very promising companies that have been funded by these groups.

In addition to these unquestionably positive contributions, techbio funds also imported a more controversial tactic from the software VC world – brash marketing and hype. Thus far, LPs have eagerly bought in to the compelling stories these funds have told about the future of the industry. But the techbio era has coincided with the frothiest biotech market in history. With the froth taken out of the market, LPs will take a more critical eye to the stories they hear from VCs. The big question for techbio funds is whether returns can live up to the hype.

If the market froth returns, techbio funds will be well established to solidify their position. But if the market stays down, winners will be decided on the basis of who can make good investment decisions and return capital, rather than who can raise big funds and get into hot deals.


Crossover investors are a mainstay of the biotech funding ecosystem. But since the COVID crash shut down the crossover trade, these investors have sought refuge in the Series A market.

Many of these groups have become more active in Series A investing even before COVID, but have struggled to take share from the established Series A VCs. With the established VCs taking a step back, crossovers have the opportunity to finally establish their position as upstream investors.

Some of these firms lost discipline around valuation and fundamentals during COVID, ultimately leading to the crash. In some cases, these funds took more of a momentum-based, market-focused approach rather than investing based on fundamentals -- investing based on what downstream investors would buy vs. the fundamentals of the company. And some of them simply got (understandably) overexcited by the potential of next-gen modalities demonstrated by the COVID vaccines. The challenge for these groups in the Series A market will be to 1) establish new networks to source Series A deals and 2) tighten up their underwriting processes to adapt to a higher risk funding stage and less supportive downstream markets.


Big pharma corporate VCs have been active at the Series A level for years, although their activity has subsided a bit as the market has become more competitive. These investors often have different goals than other VCs: while other VCs just want to make money for their investors, corporate VCs have strategic goals that serve their corporate parents in addition to (or instead of) financial goals.

Pharma companies may be the best-positioned to take advantage of the current market dislocation. With massive amounts of cash on their balance sheets and a different set of financial goals, they can afford to make investments that don’t necessarily pay off in the same way as traditional VCs would hope for. And in a less competitive market, these corporate VCs may be able to negotiate favorable deals with companies, including not just equity investments but also R&D collaborations, licensing agreements, and other transactions.

And these funds are motivated to do deals. Big pharma companies are facing large revenue losses in the next few years from loss of exclusivity on major drugs. Large M&A deals – especially of derisked products – have been a common way for pharma to address this revenue gap. Big M&A has been a significant driver of returns for established biotech VCs and public equity investors. However, pharma’s track record with these big deals is mixed, and FTC scrutiny has increased recently.

Pharma has the opportunity to replenish its pipelines not just through M&A, but by building relationships at an early stage with platform companies. Pharma could be the ideal partner for these companies, bringing valuable expertise in drug discovery and development and big cash reserves that can fund the massive potential of these platforms. Pharma has the potential to thus bring the expertise of the biotech world and the ambition of techbio to bear to support these companies.

However, big pharma will need to be flexible and open to new ways of working in order to maximize the value of these relationships. Big company culture and startup culture don’t often mix, especially when relationships are built by committees and codified into overly restrictive deals. By trying to over-optimize on short term negotiations, big pharma runs the risk of compromising the long-term potential of these collaborations.


A new world for biotech VC?


Despite the real progress made in developing new classes of therapies, biotech is still working against a backdrop of a decades-long decline in R&D productivity. And though biotech VC has generated stellar returns in recent years, some evidence suggests it has been less successful in delivering profitable medicines (more on this in later posts).

The biopharma sector is unique in that it is one of the most innovative industries in the world economy, but also one where most of the leading companies have been around for 100+ years. Startups and VCs have made progress towards breathing new life into the sector, but there is much work to be done. These emerging VCs have a chance to take up this important work and make real progress.