Monthly venture investment in biopharma startups is down 61% from March 2021 to March 2022. 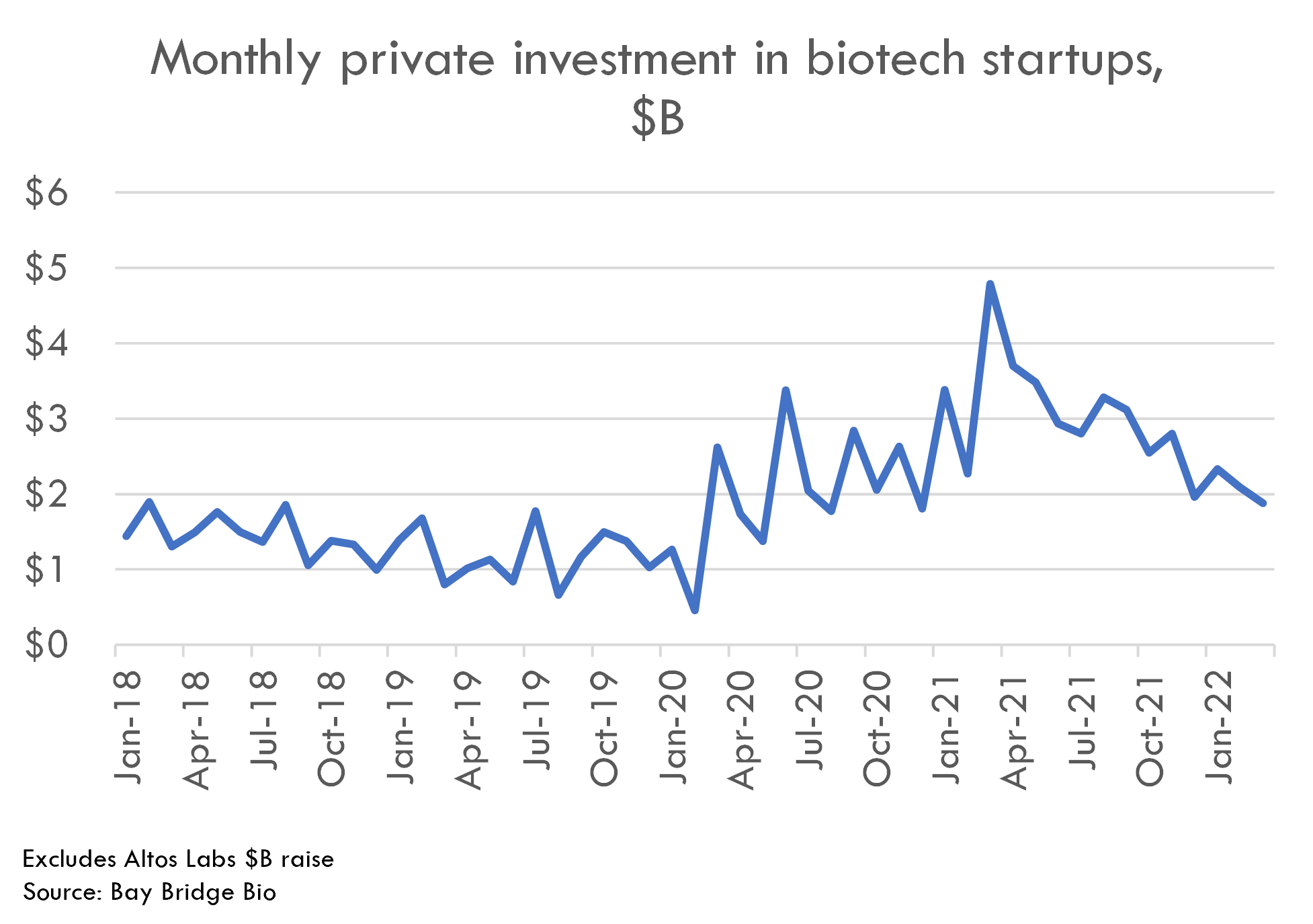 Biopharma venture investment has been on a steady decline since peaking in March 2021 (with the exception of Altos Labs' $3B raise in Jan 2022, which we exclude from the above chart 1).

The prevailing narrative in biopharma is that while the biotech IPO market has ground to a halt and public markets have crashed, the private market has remained robust. While the amount of private funding is still near all-time highs, the significant drop since last year means that a lot of recently funded startups will have trouble raising their next round.

Things could get better -- if public markets recover, venture investment will pick back up. But until that happens, private biopharma investors will continue looking for the floor.

What might cause a turnaround in public markets? In our assessment, significant monetary stimulus from the Fed is probably the only thing that can return markets to anywhere near 2021 highs. At the moment, however, the Fed's shift towards inflation control as a primary goal means that the likelihood of a Fed rescue is lower than it has been over the last 14 years. 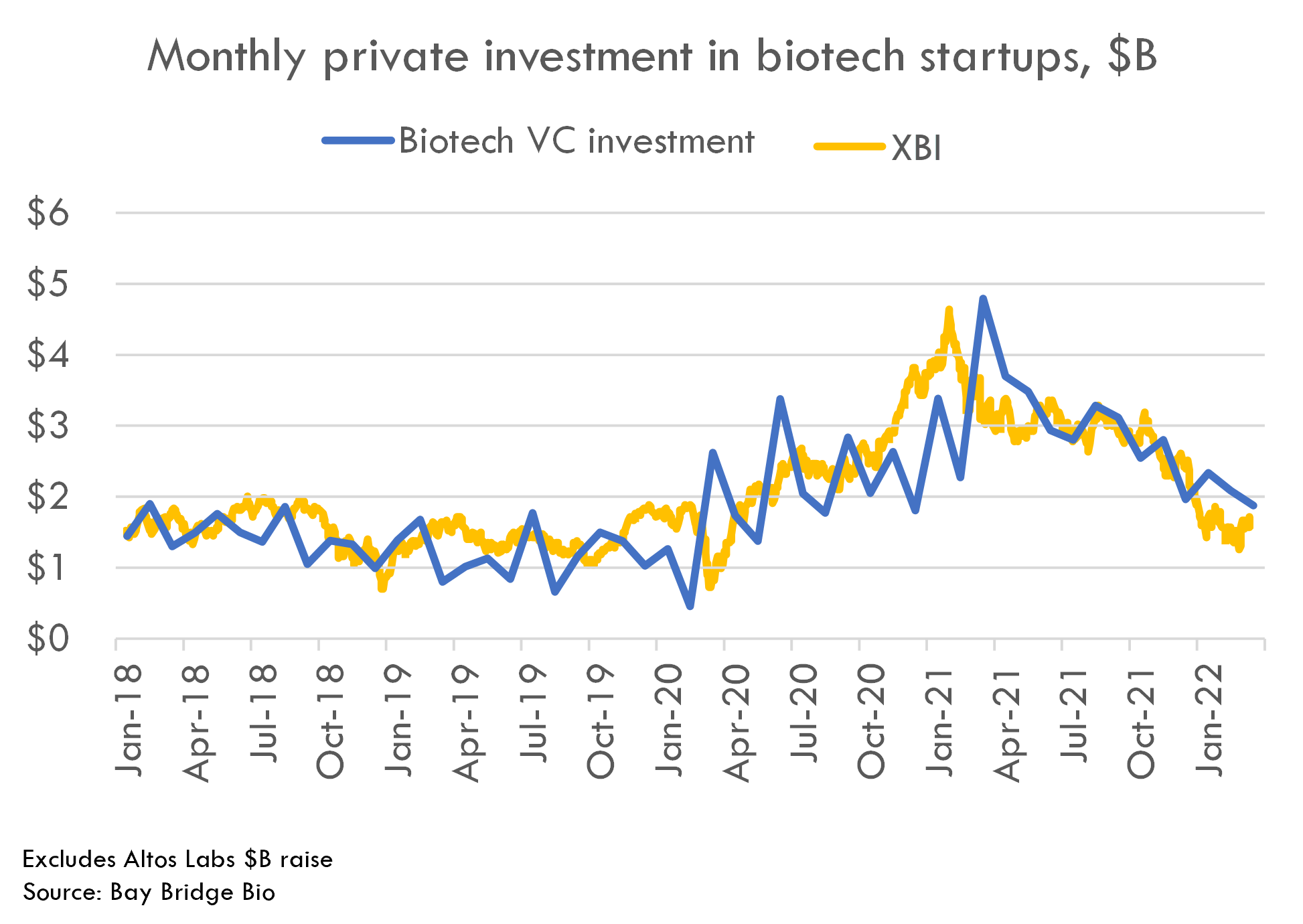 
Without a reliable IPO market, venture investors will rely on big pharma M&A for liquidity. Big pharma's current appetite for M&A is unclear, but historical precedent suggests 2015 represents the peak of the "M&A thesis". After the 2012 patent cliff, big pharma became very acquisitive and bought many small startups for high prices. This demand for innovation, combined with the low supply of startups after biotech's lost decade, led to the first "mini-bubble" of the last decade's biotech boom. Biotech private and public investors bid up the price of startups in expectation of increasing levels of M&A, which failed to materialize. This in part caused the pop of the 2015 mini-bubble (markets recovered in 2016 as the Fed came to the rescue).

For reference, in 2015 there was $11B invested in biotech startups, compared to over $36B in 2021. Thus there is an argument that because supply of startups for big pharma to buy is higher now than in 2012-2015, the startup ecosystem as a whole won't get as much of a lift from M&A as it did in the early 2010s, even if big pharma M&A picks back up to post-patent cliff levels.


Which investors are stepping back?


Although overall venture funding is declining, not all investors are stepping back in the same way. To see how various investors are responding to the bear market, we looked at the number of investments made by the most active Series A and B investors since the IPO market shut down (Nov 2021 to today: March 31, 2022), vs. the same period the prior year. 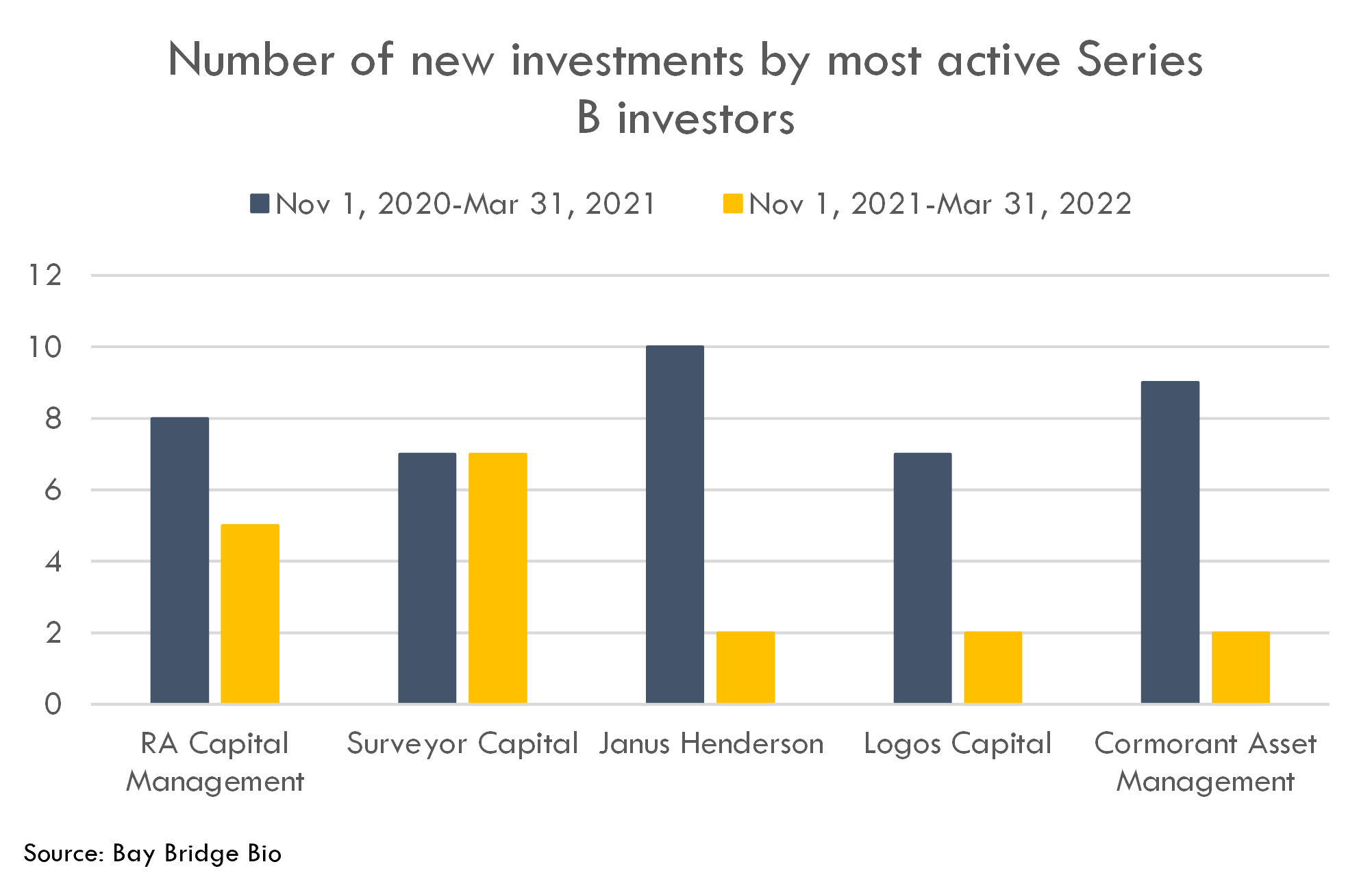 The most active crossover investors of 2021 have decreased their activity as the IPO window has slowed down -- though some have stepped back more than others. Surveyor Capital has maintained its investment pace despite the downturn. RA Capital has slowed down a bit, but still remains active. Janus Henderson, Logos and Cormorant have stepped back significantly from doing new deals. 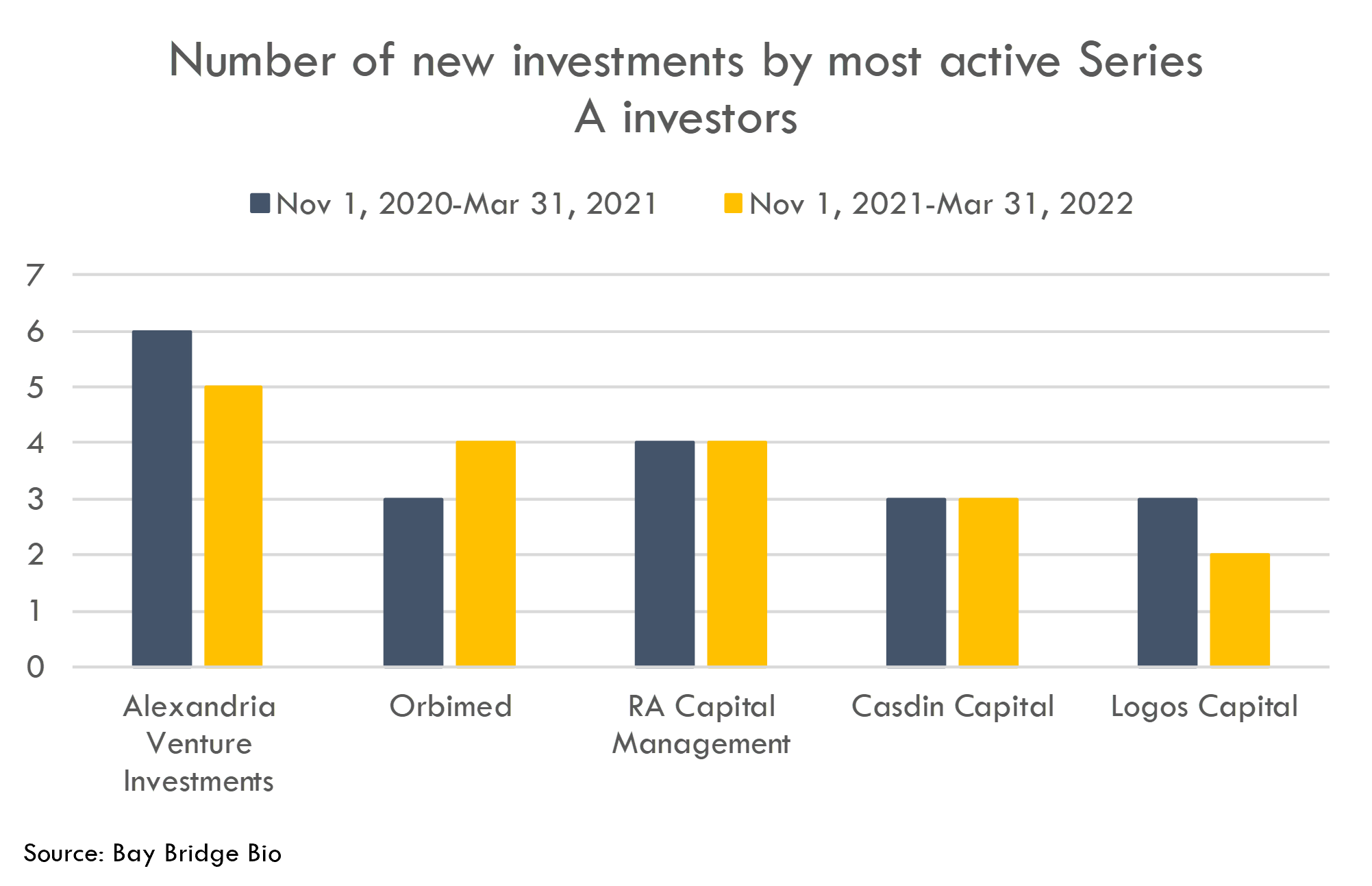 What's next for private markets?


A common investor sentiment is that the massive private funds raised last year will make up for the loss of public market investors. While this will help, it won't make up the difference. The halt of the IPO market will take ~$10B in capital out of the market compared to last year, and demand for IPO capital will increase by almost $10B due to the huge number of crossover rounds last year. That's a $20B funding gap compared to last year -- and that doesn't even count the multi-billion decrease in public follow-on offerings.

Can private biotech investors make up for a $20B+ funding gap? According to SVB, $28B in new healthcare venture funds were raised in 2021 (including healthcare services / healthtech, tools, devices, diagnostics and biopharma). Assuming half of that is allocated to biotech (which is in line with the breakdown of venture investment in biotech / tech-bio vs. healthcare broadly), that's $14B in dry powder. Assuming that capital is deployed over a three-year investment cycle, that represents about $5B in incremental new supply of private capital, which is not nearly enough to close the $20B+ funding gap.

With a large funding gap, private investors will have to choose between reserving capital to support their portfolio companies or investing in new companies. The data above suggest that investors are slowing the pace of new investments.


Venture funds will likely find it more difficult to raise new funds in the near term. VCs have recently been able to raise massive funds due to general interest in biopharma innovation, increasing LP interest in private markets due to super-low interest rates, and high paper markups (or markups of investments in newly-public companies, which are functionally illiquid) caused by the frothy markets. All three of these forces seem to be reversing: sentiment in biotech is falling, interest rates are rising, and VC's public positions are being massively marked down, with prospects for private holdings becoming less rosy over the near term as well.

Unless there is a recovery, there will be a shakeout in the venture market. While the winners of the last few years have been those who have been able to find and get into the hottest deals, the survivors of a shakeout will likely be those who can pick fundamentally strong (rather than "hot") companies. Investors will have to be picky both within their portfolio (which core holdings do they double down on) and for new investments. Dispersion of private fund returns will likely increase as the best and worst "pickers" separate from the pack.

The good news for companies and investors is that the reward for surviving a downturn is the opportunity to build a truly lasting company. With less competition for technology and talent, the winners can consolidate their positions and generate returns that were simply not possible in the frothy markets of 2020-2021. Moderna was founded in 2010, in the wasteland of the post-financial crisis biotech ecosystem. Illumina survived the dotcom crash and became arguably the most impactful company of a generation. A bit of volatility and dilution is a small price to pay for that level of success.


1 Altos Labs' $3B raise in Jan 2022: Altos is an outlier in terms of team, science, investors and funding, and at least $270M of that was raised prior to June 2021, so it's reasonable to exclude this when tallying venture investments.